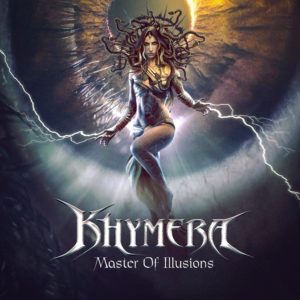 The huge AOR sound on ‘After All..’ is especially welcome. Fans of a killer chorus and huge harmonies will find an instant love as the band revisit the big sounds of early 90s rockers like Takara. In fact, the way this track’s multi-layered chorus sings out, it sounds just like something from an old Jeff Scott Soto record and is all the better for it. Factor in a blanket of keys that add a slightly pompy quality and a particularly succinct lead guitar break that values melody over flash, and this becomes a must hear. ‘Follow The Sun’ isn’t shy in flaunting the cheesier aspects of melodic rock with a rousing chorus that’s loaded with great harmonies, set against the kind of guitar riff that you’d find on a latter day Harem Scarem elpee. With the kind of chorus you’ll only need to hear twice before it gets right under the skin, this could be the greatest Khymera tune ever. It doesn’t try to be inventive or break new ground for the band – they know what the fans want by now and they seem more than keen to give it to them, playing by numbers or otherwise.

Every great melodic rock album needs a big ballad and ‘Father To Son’ is more than happy to oblige. It sounds like a number that’d like it’d be better suited to Johnny Gioelli than Khymera, but even so, it’s combination of tried and tested melodies, occasional soaring guitar leads and a very 80s sounding drum kit means it holds up well enough for something that could otherwise seem a little over-sentimental. It’s instant over-familiarity could lead to indifference for some listeners, but that will almost certainly get put to one side after a few plays as Klein’s guitar work, although often understated, is lovely. The punchy hard rock of ‘Victim of Your Love’ is another stand out track, as Khymera add a very European slant to a hugely appealing tune with a massive sing-along chorus and although it represents a path well travelled musically, its timeless mix of muted guitar riffs, grandiose keyboard fills and very 80s hook represent every reason why you continue to love old fashioned melodic rock.

Another highlight comes from ‘The First Time’, another very strong AOR number that’s heavy on keyboards without skimping on guitar riffs. Keys man Eric Ragno kicks off a rousing four minutes with a blanket of sounds, before a riff worthy of Unruly Child takes over, very much showing how the union of Ward and guitarist Michael Klein is more than capable of holding its own with the best of the Euro rock bands,. The track’s mid-section suggests a move from AOR to pomp, with a selection of more atmosphere driven keys, but it’s just a ruse since Klein quickly steps forth with a nifty solo that carries a lot of spirit. He plays well throughout the album’s eleven tracks, but this is a great showcase in how to fill a few bars impressively, but more importantly, succinctly – there’s always been far more to Khymera than bombast and nifty guitar solos and Klein very obviously recognises the importance of the song as a whole. Ward’s lead vocals are, perhaps a little rougher around the edges than the last time around (something especially noticeable on the last verse), but never enough to spoil a great track. His tough bass sound shines through at various points and that’s always great enough to forgive any other issues.

‘The Sun Goes Down’ marks another slight shift into a more pomp oriented direction at first, but a huge chorus (occasionally sounding like Nickelback, possibly not intentionally) ushers in an incredibly rousing rock tune – melodic rock by numbers, maybe, but it still sounds great – while ‘Just Let It Happen’ finally provides lovers of heavier things something to get their ears around, as a great and much dirtier sound presents itself, showing more of Klein’s range. Since this is contrasted with a purer AOR verse and chorus, there’s also plenty of more traditional Khymera sounds to enjoy, ending the record very much on a high note.

For a band that no longer features any of its original members and is spearheaded by someone who never stops working, ‘Master of Illusions’ could have felt as if it were some kind of contractual obligation, but in all honesty, nothing could be further from the truth. Most of this album is great and even when it isn’t quite reaching for the top tier of Euro AOR, it’s still very good stuff all round. There aren’t any obvious weak songs and even though Ward’s voice has been more polished in the past, it’s still better than some (higher rated) veteran rock singers can manage. There isn’t too much here that would attract anyone not already familiar with Khymera, but those who’ve bought the previous albums will love this. Highly recommended.