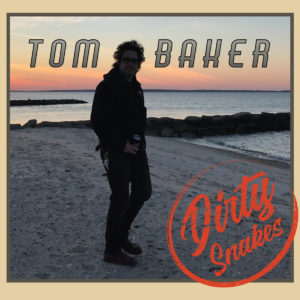 This, of course, gives fans more of exactly what they’re hoping for. In ‘Cancel It’, Baker has rarely delivered something so high octane, yet so catchy at the same time. In just two minutes, this massively trashy rocker really clears the cobwebs as it sounds like Tommy Stinson colliding with New York Dolls. Backed by The Snakes, Baker is in great form. Keeping with the grubby rock ‘n’ roll mood, ‘On Your Device’ showcases a gravel-edged lead vocal against more Replacements-ish riffery, while a fiery lead guitar that occasionally cuts through really gives the track an edge. In terms of straight up, blue collar rock, there’s so much to love here and for rock fans looking for a slightly punkier take on sounds created by fellow Rum Bar musician Nato Coles, or alternatively a more roots derived take on Gaslight Anthem, this will certainly be enjoyable.

While the Snakes’ tracks are more than great in their own way, they find themselves in the shadow of the material created with The Truckers. In keeping with Dirty Truckers of old, these tracks lean further in the direction of rootsy Stones-isms and brilliantly grubby Americana. ‘Out of Focus’, in particular, shows Baker’s gift for creating simple radio friendly hooks on a track that sounds like a noisier Soul Asylum meeting with a dash of Boston fuelled rock (the scene often has such a distinct feel and mood), while ‘Pushin’ You Away makes great use of an old-fashioned stereo split and dual guitar set up. Although an instantly familiar roots rocker in its own way, the fact that it carries more than a hint of Paul Westerberg’s influence is very welcome. It’s bread and butter stuff for Baker, certainly, but there’s no real need to push boundaries or experiment when he does this kind of thing so well.

The sunny jangle rock of ‘Weird Romance’ provides this disc with its stand-out cut. A wise choice for the record label’s Spotify sampler [listen here], this tune sends the listener spinning back to the 90s with something that never sounds a million miles away from Tom Baker fronting The Connells. The marriage of chiming guitars and slightly gruff vocals lends a near timeless appeal, while John Lynch’s solid and unwavering rhythms give this particular track a real punch. The electric/acoustic blend of ‘Turn Your Head Around’ brings more flawless roots rock with a feel good heart. The Neighborhoods’ David Minehan lends an extra dimension with some fabulously unfussy backing vocals, while Baker sounds better than ever. Sharp and loud, but never aggressive, this will send listeners scurrying back to half forgotten albums by bands like Rob Rule and Dead Hot Workshop.

If you’ve had any interest in The Snakes or Dirty Truckers before, you’ll have more than an idea of what to expect from a Tom Baker record, but a couple of these songs could be his best yet. For those still unfamiliar with this Boston musician, The Dirty Truckers or other bands in that family tree (Watts, The Neighborhoods), this is still recommended listening. If you like what you hear, it’s time to backtrack and listen to Watts’ ‘Flash of White Light’ and The Dirty Truckers’ ‘Loose In The Joints’. A good time is guaranteed.