It’s Friday night in Ramsgate. In the harbour, people are going about their usual Friday night business, drinking Belgian beers and eating tapas. On the other side of town, at the Ramsgate Music Hall, something far more unexpected is about to happen. Tommy Stinson is about to take the stage with his band Bash & Pop. For those still unaware, Tommy is a cult hero, possibly even a legend. Between the early 80s and 90s, he played bass with The Replacements, a garage rock/punk band who gained a devoted following and became influential to a future generation of musicians. He’s been a member of both Soul Asylum and Guns N’ Roses. In between those musical ventures, he’s put out a couple of great solo records and two releases with a largely overlooked band, the ironically named Perfect.

In 2015, Stinson played to two capacity crowds at London’s Roundhouse with a reformed Replacements on a most unlikely reunion tour. The fact that he’s now about to appear at a venue not much bigger than a large living room feels like a dream come true. Bash & Pop are here warming up for a much bigger event at Hyde Park with Green Day and they’re clearly thrilled to interact with a very small crowd. Cranking the volume, they launch into a set of spiky chords that quickly give way to ‘Not This Time’ the opener of the current album, swiftly followed by an equally energised ‘On The Rocks’, both showing why ‘Anything Could Happen’ – the first Bash & Pop album since 1993’s ‘Friday Night Is Killing Me’ – is classic Stinson fare. It’s not just about him, of course; this second incarnation of the band includes a couple of familiar faces: The Mighty Mighty Bosstones’ Joe Sirious is behind the drum kit (spending most of the next hour with a wide-faced, beaming grin), while Bash & Pop fan/producer Justin Perkins fills the bassist’s slot with a solid presence showing none of the potential trauma expected for a man who has been one of nearly thirty Screeching Weasel members to date. Over on stage right, Hold Steady man Steve Selvidge proves to be a good counterpart to Stinson’s trashy rock ‘n’ roll chops, often adding more intricate and sometimes rootsy leads across these opening tunes. 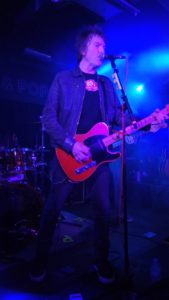 It’s an intimate crowd, and even after a couple of songs they seem rather subdued, standing several feet away from the stage. Stinson beckons everyone forward, but nobody moves straight away. There’s a self-consciousness that comes with such an intimate gathering. Another couple of rock ‘n’ roll belters shoot past in the blink of an eye…and Stinson calls out again, suggesting he’s “not gonna play until he can smell the audience”. Here is a man who very much wants interaction, especially since everyone working hard on stage is having a blast. The crowd moves forward and the band responds with a spirited cover of The Who’s classic ‘The Kids Are Alright’, halfway through which, this tiny venue just seems so perfect for the band. A little time is spent talking with the crowd, asking what Ramsgate does at the weekend and Tommy asks if we all have boats, obviously having seen the town’s harbour earlier in the day. His fascination with boats then becomes somewhat of a recurring theme and it’s great to see him laughing with his bandmates in an offhand and unrehearsed manner. He asks Steve what they should play next, leading to a fine run through of ‘Anytime Soon’ and this casual approach extends to the rest of the set: while a cover of the Stones’ classic ‘Midnight Rambler’ is planned alongside ‘He Means It’ (from the B&P debut), neither are played. A couple of things that aren’t on the setlist take their place later, but given the nature of the night, it almost doesn’t matter what Tommy plays – it’s just great to be there, close enough to see the sweat running down his guitar.

It’s not just about the raucous tonight, as both ‘Anybody Else’ and ‘Zero To Stupid’ (the latter from Stinson’s ‘One Man Mutiny’) stretch out to showcase Americana sounds and something a little mopier. Before the former, Stinson pre-empts the audience and suggests “it’s time to get a drink or go for a piss”, but despite a semi-ironic warning of the pending mood change, nobody minds and the small venue allows these tunes to take on a new feeling of importance. Nearing the end of the set, a couple more of Stinson’s solo tunes get an airing and fit perfectly alongside the Bash & Pop material, while a gloriously trashy (and loud) take on ‘Unfuck You’ lifts the audience before a spontaneous encore. In keeping with much of the night, Tommy starts the encore with a slow number before abandoning it halfway for something more uplifting…and by the time he and his friends leave the stage, there’s a feeling of a job well done; the set’s imperfections only add to the overall enjoyment of the evening.

The set and performance is not perfect; it would have been awesome to hear ‘Never Aim To Please’, ‘Hang Ups’ and a raucous ‘Fast & Hard’, but even so, so many other factors have made this night very special indeed… Given Stinson’s classically trashy Rolling Stones meets Johnny Thunders style, the venue choice couldn’t be better. What the select audience has seen tonight has been wonderfully loose; a vision of a band in their natural habitat, cranking the riffs, but ultimately having fun. For Stinson, the opportunity to get so close to his audience – especially in contrast with those G n’ R shows – must be a very welcome thing. Judging by tonight’s performance, he still loves what he does… It’s not about the money or the fame and he’s certainly not just going through the motions like a career musician. For a longtime Replacements fan – and for a Stinson fan in particular – an opportunity to witness a hero up close is rare. Imperfections or not, this has the potential to be gig of the year.