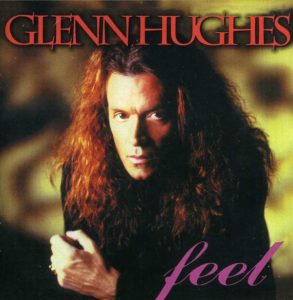 This smoother Hughes sounds at his best on ‘Does That Mean Much To You?’, a brilliant soul tune that isn’t a million miles away from sounding like something from the Andrew Roachford and Seal back catalogues. Drummer Gary Ferguson hits upon a very 90s acid jazz groove, to which Hughes adds a really funky bass, while a muted rhythm guitar augments the funk. Hughes is in terrific voice throughout, hitting the higher notes with ease, without resorting to screaming. He very much compliments the track rather than dominating it – and that’s an approach that stands this album in good stead throughout. Factor in a harmonious chorus that comes straight off a 90s soul single and it’s a real winner for the style. It’s easy to imagine some listeners who’d hoped for ‘Burn’ and ‘Muscle & Blood’ style workouts being disappointed at the time, but that would always be their loss. Dropping even further into soul, ‘Save Me Tonight’ edges dangerously close to sounding like something Luther Vandross might have offered at the time – complete with shiny, bell like keyboards and a Curtis Stigers inflected sax – but, again, Hughes absolutely nails everything vocally, always sounding brilliantly emotive, but never overtly theatrical. A million miles away from his rockers with Trapeze and Deep Purple, it really shows what a versatile vocalist he can be.

More sax, synth and smoothness drives ‘Coffee & Vanilla’, a slightly funkier affair where Hughes taps into sounds that wouldn’t have been amiss on albums by Prince and Mavis Staples at the time of recording. Again, it’s a very natural fit for the more sedate performer as he curls his strong vocal around swathes of slapping bass. With the guitars very much taking a back seat, it’s down to that bass to carry most of the arrangement and Glenn’s playing is especially good – it’s clear he’s really enjoying expressing his soul and funk chops. ‘Feel’ is very much an album that presents an artist doing exactly what feels natural – to hell with expectations – and when it works as well as it does here, that creative process trumps easy sales every time. Very much reinforcing the point that half of ‘Feel’ is about soul, a cover of Stevie Wonder’s ‘Maybe Your Baby’ is a very natural fit for the record. Hughes remains respectful to Wonder’s legacy, but doesn’t deliver it entirely straight. Instead of being heavy on the 70s clavichord, the main groove is transposed to guitar, giving the funk a slightly tougher sound. As expected, the vocal comes closest to Wonder’s on the chorus where Hughes revisits his ‘This Time Around’ style, but in some ways, the real interest within this cover comes from Pat Thrall who takes the understated guitar line from Stevie’s recording and completely runs with it, adding lots of bluesy lines to the track’s extended coda.

‘Feel’ doesn’t completely exclude the loyal fanbase of rockers, and on ‘Talking To Messiah’, Glenn and Pat revisit their Hughes/Thrall days with a guitar-heavy workout where the pair really cut loose. The opening riff is dirtier but still retains something of a groove-laden edge and after dropping into a full scale funk rock tune, it’s clear there’s more of a Living Colour influence running through the arrangement. However, a superb vocal and a great riff aren’t enough alone to ensure classic status and between a weaker chorus and the track feeling somewhat out of place, it doesn’t work as well as it really should. That’s not to say it’s a bad tune overall – Thrall plays very well; guest drummer Matt Sorum packs a punch behind his kit and during a quieter mid section, we hear more of the range Hughes is capable of delivering – it’s just hard to imagine it’d be anyone’s favourite given the quality of the rest of the disc. [Interestingly, had this appeared on the later ‘Songs In The Key of Rock’ album a few years later, it would sound more natural, if not stronger all around.]

‘Redline’ sounds like it’s going to be another retro rocker at first, thanks to Thrall adding a fairly hefty blues rock riff, but with the arrival of a vocal, the verse eases into a light funk groove that sounds like something from a Corey Glover solo album. Make no mistake – this is no bad thing; in fact, it’s great. Against cleaner toned guitars, Hughes adopts a slightly higher vocal register in places but, as with most of the album, he never over-sings anything. He sounds like a total pro tackling this role of a slightly tougher Al Green, and once the rockier riff returns for the chorus, his louder approach compliments the riff rather than smothering it. Thrall, meanwhile, doesn’t want to be just a hired hand and really puts his own stamp on the end of the number with a cracking solo atop a riff that occasionally hints at ‘Muscle & Blood’. It might not seem like it on first listen, but it’s one of ‘Feel’s very best tracks.

Another essential cut, ‘Living For The Minute’ sounds like the natural successor to parts of ‘From Now On…’ with an arrangement that fuses rock, pop and good old AOR seamlessly. The bass clings on to a slightly funky groove, while the vibrato filled lead guitar parts – played by World Trade‘s Bruce Gowdy – do their best to channel a very Steve Lukather feel throughout. It isn’t especially a track that stretches the musicians’ talents, but between a very 80s punch, a strong melody and the kind of riff that always allows for great guitar fills, it’s a must-hear for melodic rock fans. ‘Big Time’, meanwhile, goes for a punchier style where the band hits upon an arrangement that sounds like a cross between something from Hughes/Thrall and Stevie Salas Colorcode. The bass drives everything with a hefty thudding bottom end; there’s no room for any flashiness here, it’s all about the way that locks down a rhythm while a heavily wah-wahed guitar part acts as a throwback to the funk metal boom of 1991. Curling his voice over a simple hook and driving pace, Glenn is in top form. Everything sounds very much as if it were created as an audience rouser…and it’s certainly none the worse for that. In fact, by the time Thrall launches into a huge solo over heavy keyboard chords, it becomes another album highlight.

With a full blown funk obsession, ‘Push!’ combines an old fashioned rock riff with the kind of swagger and bluster beloved by many a retro funk-rocker once again – creating a superb showcase for Thrall – while the rest of the band sound like they’re having just as much of a good time. This is one of those tunes that’s a winner from the get-go, but once a wordless chorus of “na-na’s” springs up, this marriage of Stevie Salas and Sly Stone grooves becomes particularly infectious. Driven by a more synthetic funk, ‘She Loves Your Money’ fares less well, being a case of a potentially good song weakened by a decision to use synth bass throughout. The arrangement might seem dated, but a strong hook and another flawless vocal just about win out, creating a solid track. ‘Speak Your Mind’ rounds out the eleven original cuts with a tune that applies a few westcoast AOR elements to another soulful but funky tune that might not have felt too out of place on an old Toto LP, despite the keys hinting more at shiny 80s soul. Naturally, Hughes is able to take this multi-layered and very slick style and give his all, delivering a solid number in the process. While his voice is strong, a special mention must be made for his bass playing which is absolutely spot on. Although the heavily filtered sound of the production means the finer points of his performance are sometimes lost under a blanket of keys and a choppy guitar part, there’s a brilliant bass part lurking and when that finally rises during an all-too-brief instrumental break, it acts as a sharp reminder of Hughes’s musical abilities.

Feel’ is a record you’ll either love or hate. However, with Glenn in his best vocal shape for years, his playing bass on every track and absolutely nailing a fusion of rock and soul throughout, only a genuine idiot could hate this record. From a creative stance, it’s very much a high point from a very prolific period. If you think you know Glenn Hughes but somehow missed this album at the time, you owe it to yourself to approach it with open ears. It’s terrific. …And if you didn’t like it in 1995 and haven’t had the inclination to revisit it, maybe it’s time you did.

[‘Feel’ is included in the Glenn Hughes box set ‘Justified Man: The Studio Albums 1995-2003, released via Cherry Red/Purple Records in January 2020. A re-recording of Deep Purple’s ‘Holy Man’, originally from the 1995 Japanese edition is included as a bonus track.]