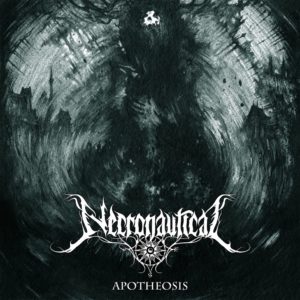 One of the band’s very best tracks to date, ‘Lure of The Abyss’ is a superb thrash-black-goth metal crossover. Opening with a hard thrash riff, it instantly grabs the ear, before overlaying that with semi-acoustic sounds and a cinematic keyboard part, thus creating some superb gothic metal that draws a little influence from the early My Dying Bride. The sweeping keyboard melodies continue as if Danny Elfman has intruded on a session by Ragnarok and the guitars, too, seem to convey a twisted delight in their crunchy but accessible riffs. Eventually revisiting various classic thrash metal traits, there’s even time enough for a clean, old school lead break, which creates another instrumental highlight. At the other end of the scale, the guttural vocal and pneumatic riffs that spring forth intermittently are still confrontational enough to please the black metal crowd. The push and pull between the intensive black metal wall of sound and more traditional thrash/melodic death metal makes this a fairly restless piece, but that just keeps it more interesting than most.

The title track keeps up the quality with a heavy workout that fuses thrash and battle metal in a very epic way. The tribal drums during the intro convey force, while the riff that follows is of the classic groove oriented variety. Moving into the bulk of the track, the thrash metal aspects are lost in favour of a dark melodic black metal approach, but the way the riffs appear to sway back and forth further cements those early hints of a battle metal bombast. Instrumentally speaking, it’s another winner, with hints of neo-medieval acoustic work and a blanket of keys giving a very layered texture. That already brings a lot of enjoy, but the presence of occasional cleaner vocals presented in a very retro way is also very cool. At the point it seems as if the band couldn’t wedge in any more, a well played lead guitar adds more of a classic metal edge, before an uncompromising wall of pneumatics crushes everything for one final verse. In extreme metal terms, whether symphonic black metal, intense folk metal, blackened battle metal – however you’d like to care to label this – it’s a track not to be missed.

‘All Is Vanity’ is a number which shoehorns three quarters of the band’s musical interests into one seven minute epic. Following a few droning sounds and demonic, ritualistic chanting voices, a fantastic riff bursts from the speakers. Part classic thrash, part black metal, the combination of pneumatic drums, speed driven guitars and semi-orchestrated keyboards creates a wall of sound that has a true impact. It doesn’t break new ground – it doesn’t need to; Necro show, again, how they can be masters of their chosen dark metal assault. Closing with a slow and repetitive doom riff, there’s even something on hand for those looking for something far more traditional, but there’s a good chance the vocal will have already sent those listeners in search of other metal thrills. Still as tightly played, but not as immediately appealing, ‘Nihil Sub Sole Novum’ presents a sheet of impenetrable noise that fuses the intensities of early Cradle of Filth with the uncompromising black metal intensities of Bast. At first, it appears to be all pneumatics and no real melody; the first minute suggests it’ll be a real slog…and then something snaps. The band slows down to deliver a classic moody thrash riff that’s a bit like one of Slayer’s mid-pacers cranked in volume and force. With that, the Necronautical that, by now, you’ll either love or hate, hit their stride once more.

Opting for something a touch more gothic, ‘Totentanz’ is a brilliantly dark waltz; all riffs and force, yet at the same time, somehow it conveys something deeper than many other black metal acts. It’s occasionally hampered by a shrill lead guitar, but otherwise sets up an excellent sense of atmosphere throughout. Of particular note is the superb intro which places a slow and doomy riff against a colder lead guitar. The way that leads into the waltz and the deep groove where the riff is always more important than the vocal makes it another of the band’s more accessible tracks. The use of synthesised, spooky harmonies provides a pleasing contrast to the husky lead vocal and by two minutes in, this becomes a really top drawer extreme goth workout. With such a fine balance between force and metallic melody, it really should’ve been the album opener. Back into the more extreme end of black metal ‘Here Begins The Fall’, meanwhile, reinstates more speed but, as before, the tightness in the arrangement is what really impresses. As if to sweep away any feelings that ‘Totentanz’ might have been a bit lightweight for some listeners, this track goes deep into pneumatic territory, but even then, a few passages with a more accessible metal style and hints of eastern melodies are a superb touch. Although this doesn’t add anything new to the album as a whole, it’s hard to find fault with any of the musicianship.

Finally, the eight minute ‘The Endless Spiral’ ends the album on a high with some extreme gothic metal traits. The way a cold and husky vocal is joined by multi-layered, 80s inspired guitar riffs really shows off Necro’s constant fascination with the contrast between the metallic, the melody and plain forcefulness. It isn’t a complete aural assault, though, as various acoustic interludes allow the listener time for reflection throughout. For those looking for something of a purer black metal sound, the middle of this lengthy number gives out to a huge slab of noise, but whereas some of the other tracks’ extreme tendencies are so obviously uncompromising, there’s something about this number’s most forceful moments that somehow appear to be richer in depth and texture. It might just be that your ears have adjusted after forty minutes of black metal…but the slightly different feel is evident. Closing with a mournful goth-inflected, doom metal riff, the listener is given one last burst of classic metal – with some great twin leads – before Necronautical bow out, very much making track this another highlight.

In the main, this album is cold, unforgiving and pretty much always brutal, but the occasional concession to thrash metal traits and the deep gothic feel definitely puts this in the more adventurous bracket than some black metal influenced releases. It sort of goes without saying that ‘Apotheosis’ is for genre fans only, but in terms of blackened symphonic metal it’s an album that has some really epic qualities and is well worth seeking out.