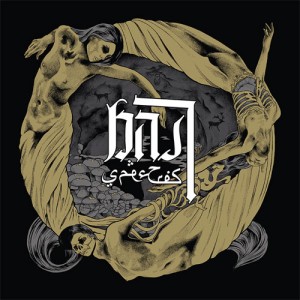 ‘In The Beginning’ begins the album with something that will be absolutely unlistenable to those who do not enjoy any black metal or death metal. After a relatively lengthy piece of “atmosphere” involving a wind sound and clanging guitar chord, the trio breaks into a wall of noise where the guitars crank out a repetitive, fast chord progression, the drums become all pneumatics and no flair, while the vocals are an near-inaudible collection of rasps and grunts straight from an early Cathedral album. If you like that, it’s fine, but if this kind of thing doesn’t excite you, there’s nothing here to please. Thankfully, on the remaining four tracks, between bursts of scratchy Cradle of Filth-esque vocals and music that occasionally sounds like it’s coming from another room, there are fuller sounding instrumental passages and plenty of opportunities for more tuneful concepts (relatively speaking) to emerge. For the more patient, between the huge slabs of intense black/death metal, some huge doom-laden edges provide some very important musical sustainance; hefty nods to Black Sabbath as well as a couple of 90s stoner bands bring some well planned light relief.

At Bast’s most accessible, these doom/stoner tendencies represent some pretty fine listening during the title cut. its overdriven, downtuned guitar riffs taking their cue absolutely blatantly from ‘Masters of Reality’-era Sabbath before dressing them further with a few motifs from Orange Goblin and Fu Manchu. Influence from the latter at its most obvious during the almost groove-friendly middle section, owing so much to tunes from ‘In Search Of’, as well as the Sabs classic ‘Children of the Grave’ – although, again, both influences are reworked and twisted into something much, much heavier. The tune owes so much to its groove, as the vocals – an intense, throat-killer of Dani Filth-ness – don’t always do it full justice [although those who aren’t adverse to a death metal roar will have no problem listening to this at all, of course]. Tacked on to the end, relatively clean toned guitars make a sheepishly brief appearance, before a slow and grinding riff drags the music’s bloated carcass out for another two minutes before the band decide that enough’s enough and it’s time to experiment with some slightly different sonic textures.

Equally interesting – though no less huge – the twelve-minute echo/sludge-fest ‘Psychonauts’ is captivating in its wanton emptiness. A three minute intro plays with feedback tones and an intermittent bass drum pedal, before Jon Lees pulls the band into a recognisable tune, rattling his bass pedals and cymbals as if he’s playing black metal’s equivalent to Pink Floyd’s ‘One of These Days’. The sound gradually more ominous by the presence of a severely distorted bass continuing the droning themes of the number’s intro, this mixture of arty drones carries on with abandon, the trio slowly building a wall of sound via detuned instrumentation – any riffs in this sense being more of a repeated spacious noise than anything hummable. You’d expect things to build gradually under this, but very little changes from its introduction through to the eight minute mark when the repeated rattling and grinding of guitar strings gives way for something a tad faster and the illusion of something lighter, before descending back into a pit of distorted darkness. It’s odd, but although ‘Psychonauts’ represents some pretty impenetrable qualities, the hypnotic, spaced out vibes this track gives off makes it rather enjoyable…and eventually perversely accessible. It certainly makes an impression.

The nine minute ‘Denizens’ takes “sludgy” to ridiculous extremes by cranking a riff so slow, so intense in parts that it makes the likes of Crowbar and Electric Wizard sound joyous and flippant. Guitarist Craig Bryant (also responsible for the disc’s near impenetrable vocal style), has everything downtuned as far as humanly possible creating a wall of sound that’s hard to argue with in metal terms. His further use of that brutal, distorted sound colliding with a heavily treated lighter sound during the track’s final two minute sludgefest represents the pinnacle of doom – in many ways, it’s a pity that parts of this sheer metallic force are hindered by a rasp of a voice, little more than a distraction. On the other end of the musical scale, the mid-section throws itself headfirst into death metal territory, with the band thrashing away with absolute abandon. Never as interesting as the slower, more imposing elements, but at least it shows off a different side to Lee’s drumming techniques.

‘Outside The Circles of Time’ begins with Bast’s lightest musical tendencies, as a clean-toned guitar repeats a musical phrase that, at first, sounds like we’re headed for something proggy, before one of the hugest riffs crushes everything with a funereal slowness. The enormous chords are occasionally tempered by a busier riff (with great use of a wah-wah pedal), but brutal is the watchword here. The vocals are clean, but the lyrics aren’t so important, with the same line repeated. After what feels like an age (in a good way, perversely) the band speed up – the collision of drums with a superb riff teases more doom-influence, before (sadly) drifting into full-on black metal territory with the vocals hissing and creaking. It’s not a complete loss from here, though, as once the irritating voice has departed, the band rock out in a very intense manner, fusing their black metal roots with some surprisingly old-school chops – finishing this musical menagerie with a lead guitar break that seems somewhat out of character with the rest of the disc. It’s appearance, of course, is most welcome indeed.

Even though ‘Spectres’ comes with atmospheric chunks and a few easily digestible grooves, on the whole, this release is sludgy, uncompromising, intense…and occasionally epic – the echoing final mix making everything sound even more threatening than ever. It’s few almost gleeful detours into Sabbathland are undoubtedly the highlight (during which, Bast sound truly awe inspiring) but most of this record will be too focused on black metal tendencies to hold the attention of most stoner/doom fans. That’s a pity, since some genuinely excellent doomy moments are in danger of being overlooked if Bast feel somehow unable to reach out too far beyond their favoured black metal roots.  They may not want to, of course: they already have a sound and a release in which black metal connoisseurs will find much to enjoy…and that already puts them in a strong position with regard to their art.