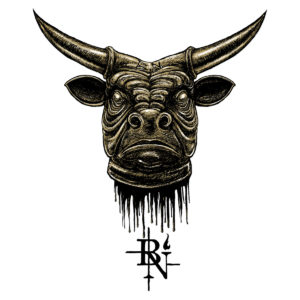 An intro, ‘The Tale of Raymond’ plunges the listener into the band’s world of darkness with a spooky spoken word piece that owes so much more to dark psychedelia and the proto-metal of 1969 than a current world of sludge – although its mention of Raymond being “masticated by spiders” is fairly horrific and in keeping with the Neckbeard’s usual twisted fantasies. ‘The Were Spiders’ presumably capitalises upon this horror of horrors, but since its lyric is completely masked by a throat-wrenching death metal growl, the details are less than clear. This might be a good thing, especially if you’re a committed arachnowuss. The music, on the other hand, is absolutely astounding. Setting up the sludgiest of riffs within approximately three chords, the band continue to show how they are one of the most uncompromising and heaviest bands to emerge on the sludge circuit over the past decade. The guitar tones are like mud, which combined with a hugely uncompromising vocal results in something that values the art of the riff over almost everything else, but the way this track takes that skull-crusher and drives it home in a hugely repetitive fashion creates top class sludge metal. When occasionally speeding up – as indeed this track does, but briefly – the listener gets a brief insight into how Byzanthian Neckbeard handle a groove…and in this case, it’s with as little subtlety as possible. It’s hard work, make no mistake, but it’s also great.

‘Devilworm’ takes a similar heaviness but cranks the gears a little slower, until the title track hits upon an absolutely classic doom/sludge hybrid that brings the best out in this trio’s intense intents. Throughout the slow and relatively lengthy piece, Paul Etasse’s drums dominate with a heavy echo, but are particularly cool during the instrumental parts where he backs a riff that sounds like a cross between one of Slayer’s slow numbers and some death metal from 1990 replayed at about a third of the speed. One of Neckbeard’s most varied tracks, Phil Skyme’s death metal infused vocals are at their most aggressive and his demonic hiss placed over the slowest noise pushes any idea of actual melody to the limit. Elsewhere, mid-paced chugging shows a love for classic doom and there’s even time for two thrash speed breaks where Etasse really gets to cut loose. Whether immersed in a slow, grinding swamp of riffs or dropping into an occasional riff on loan from Machine Head, the love for the music shines through at every turn. ‘Necron5’, at first, finds the band in an uncharacteristically bluesy mood as a slow riff is augmented by a slightly cleaner lead guitar, but after a lengthy intro, things drop into the ultimate heaviness for the bulk of the track. To call it sludgy would be an understatement – the soundtrack to this planetary discovery is uncompromisingly slow and heavy, but the second half injects a little more of a stoner-ish swagger. The heavily distorted growling vocal will split opinion (as always) but there are at least three absolutely classic riffs to be discovered within this number – in many ways, it’s a seven minute CV for the band’s entire range of musical traits. ‘Out of The Deep’ at first brings something slightly different again by way of a slightly distorted guitar and near tribal drums, but it isn’t long before everything finds its feet with a more typical Byzanthian approach once the band takes their beloved heaviness and uses it to drive a very mechanised, repetitive riff. At times, this owes more to Rob Zombie than Crowbar, but its blend of crunchiness and a growling vocal creates a great doom/melodic death hybrid. If you’ve latched onto the Neckbeard’s heaviest sounds so far, you’ll find plenty more goodness here.

In amongst all of the sludge are a pair of numbers that rank as “Byzanthian best”. ‘Evisceration Stare’ takes many of the band’s usual traits and injects them with a touch more speed, resulting in four and a half minutes of fantastic riffs. There’s still plenty of sludge, but thanks to a great drum part with plenty of bass pedals combined with a grinding four stringed bass sound, this will have more appeal for those who like their metal more geared towards doom and groove. It’s great from first listen, but once you become familiar with the album as a whole, the groove metal riff that powers the chorus sections sounds genuinely amazing. ‘Condemned To The Swamp’ is just straight up doom metal, with no quirks or surprises. A massive riff is everything here – a riff that makes Spacebeast and even Kurokuma sound non-committal. Skyme’s severely downtuned guitar locks into a bottom end groove in an impressive way, but the way Robillaird’s bass manages to go deeper still is the ultimate testament to the Neckbeard heaviness. That might’ve been enough to secure the album’s highlight, but the brief switch to a timeless sounding Fu Manchu infused head-bobbing groove for the instrumental break is one of the finest moments to be pulled from this frighteningly intense forty minute sludge-fest.

‘Extinction’s truncated playing time, in some ways, works a little better as three songs from these guys pretty much equals the best ratio between heaviness and impact before general fatigue sets in. That’s not to say that ‘Minaton’ has any weak links, as it really doesn’t – this is grade A, top-class sludge metal – but it’s very much an album approached in short bursts; perhaps tackled as it were three EP releases. The best advice is to drop in, check out ‘Evisceration Stare’ and if you love that, you’re golden – you can feel your way through the rest of the album and Byzanthian Neckbeard catalogue from there and find lots to enjoy For fans of the style, of course, this will be an essential purchase…tiring or otherwise.

Read a review of ‘Extinction’ here.