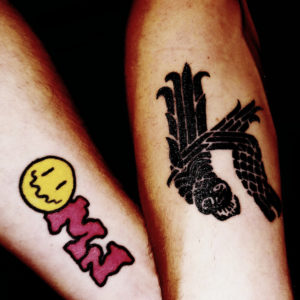 Kurokuma’s second release, 2018’s ‘Dope Rider’ EP presented the perfect mix of heavy riffs and branded artwork in a small but intensive package that was pretty much guaranteed to thrill fans of extreme metal and comic books. A release that really cemented the band’s wondrously sludgy sound, it would be a certainly hard act to follow.

2019’s ‘Sheffield’s Best Metal Bands, Vol. 1’ (a title referring to its being the first in a series from Off Me Nut Records as opposed to any psychosis within Kurokuma itself) brings fans another full compliment of obtrusive and sludgy riffs stretched across three lengthy tracks…and it’s a release that dishes out more extreme heaviness per inch than most listeners will handle.

An immediate stand-out, ‘Wasp Nest’ begins with a sample of buzzing stripy bastards combined with a sludgy downtuned bass. The riff that quickly takes hold is simple but immense: recalling a few moments from the band’s back cat, there’s enough weightiness here to please most fans, even if the repetitive rhythm that soon joins the sludge almost seems like an old loop from a dance record, albeit played at about a tenth of the speed. This, in essence, powers the whole of a very cyclical five minutes and it’s only the presence of occasionally distorted guitar chords that pierce through the groove that provides any genuine contrast. Sludge-trance doesn’t seem to be a genre that’s been exploited by anyone else so, here, Kurokuma could certainly claim to be taking an already marginal sub-genre of metal into new territories – and it’s bloody fantastic, worth the price of admission alone.

On either side of this instrumental experiment, it’s business as usual for the Sheffield sludge-bearers as both ‘RVN’ and ‘Deeper Underground’ bring not only maximum heaviness, but also a consignment of throat caning vocal noises that all so often makes Kurokuma sound like one of the heaviest bands on the planet. ‘RVN’ eases in with several Hawkwind-esque looped keyboard sounds, teasing with heavy psych at first. The combination of heavy live drumming and pulsing keys is superb, suggesting it’ll be a great track even before the expected sludge riff smashes through. …And when that comes, in terms of the oppressively slow and heavy, it ticks so many of the right boxes. The guitars are incredibly dense, but due to a great final mix the pulsing keys are still incredibly clear. Sounding all the more like Conan covering Hawkwind, it’s the kind of thing that could go on for at least ten minutes more than it does before a change of mood is needed… After bringing in a voice belatedly, it’s then time to crush the audience with a sludge/hardcore hybrid where an insane dual vocal makes Kurokuma sound like they’re about to burst. From herein, it isn’t the easiest of listens, but an amazing drum part – incredibly loud in the final mix – definitely suggests this’ll become a fan favourite over time. ‘Deeper Underground’, meanwhile, is a ten minute tour-de-force of sludge that rarely cares so much for any crossover potential or new ideas. What it does, of course, is shows off an amazingly powerful sludge beast in full roar. The aggressive fuzz bass at the start more than sets the overall tone, but between a grinding Conan-ish riff and heavy pounding rhythms that keep everything nice and sludgy as Kurokuma move gleefully from incredibly heavy to heavier still, this provides some fine listening for genre fans. After five minutes or so, a vocal arrives, and its echoing, throat damaging, screamo anger provides one of the strongest links to the band’s earliest material. Upon slowing down just a touch more and bringing in a rhythmic punch that sounds like someone hammering in metal poles, the intensities feel more tightly wound than ever. With this number, Kurokuma show there’s still a lot of mileage in relatively uncomplicated and uncompromising sludge metal sounds.

This EP genuinely reaffirms the trio’s commitment to heaviness and is yet another bid for the UK’s sludge metal crown. Overall, it doesn’t quite match the true perfection of ‘Dope Rider’, but between some intensively slow grooves, a little more experimentation than before and a great, almost live sound in places, there’s little doubt it’s another release that Kurokuma’s fans will absolutely love.