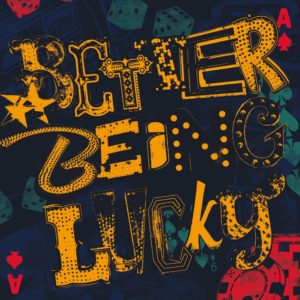 The are some great albums in the Wonder Stuff back catalogue. From the undeniably classic (‘The Eight Legged Groove Machine’) to the underrated (2005’s ‘Escape From Rubbish Island’), Stourbridge’s finest can often be relied on for delivering entertainment. A natural successor to 2016’s ’30 Goes Around The Sun’, ‘Better Being Lucky’ has a balanced approach; its mix upbeat material and thoughtful downers will appeal to the more committed fan. On first listen, it’s good…but as time passes, it’s one of those albums that sounds even better.

The first hints that this ninth album is something special appear straight away, as ‘Feet To The Flames’ makes a grand entrance with an almost goth-pop riff. The use of soaring guitars might be a world away from the hard jangle of ‘It’s Yer Money I’m After Baby’ or ‘Mission Drive’, but it really gives the opening track a feeling of grandness. As the main riff kicks in, the expected jangly elements take root, but beneath the more traditional Wonder Stuff riffery, guitarist Malc Treece continues soaring, leading to a tune that has so much depth. Reaching the final melody before the vocal arrives, the overall sound becomes unmistakably that of Wonder Stuff – regardless of line-up – and armed with a lyric about not forgetting and not forgiving, Miles Hunt is in a typically acerbic mood. Across the next three minutes, the beginnings of a great album are really set in place; there’s a feeling of nostalgia, of course, but also a feeling that the band aren’t content with merely recycling their past glories.

‘Lay Down Your Cards’, a song that on the surface appears to be about a broken relationship, steers everything into a slightly darker place with a riff that has an oddly unsettling tone. As is so often the case with the best Wonder Stuff material, it’s a track that’s full of brilliant musical textures. “I’m so tired of this need to appease”, Hunt opines in the middle of the second verse; “I’m not so sure you ever cared…” he continues, in a way that more than suggests a change in personal situations. For those that aren’t all about the lyrics, though, the track still has plenty to give. A huge chorus is only one great feature… Throughout the louder sections of a number that comes with an almost cinematic scope, the drums are deep and the riffs are bih, but best of all, a few haunting strings lend a few very distinctive pizzicato embellishments. As the last notes fade, there’s a feeling that this might just have been the moodiest Stuffies track in a long while.

The title track has a very buoyant feel and lots of musical callbacks to the 90s, very much feeling like a distant relative of the best ‘Hup’ material, especially in the way a jubilant vocal dances in and out of a great indie-rock riff, while ‘Bound’ stokes up the 90s feel with a massive jangle throughout. Hearing the band cutting loose on a great riff instantly sets up a great track, but the addition of hand-claps on a pre-chorus and a genuine feel-good mood seems set to make this a fan favourite. A genuine highlight, ‘Let’s Not Pretend’ opens with a multi-layered arrangement where ringing guitar lines weave in and out of a great drum part, while wordless vocals lend a dash of pop charm. As the verse takes a hold, the melodies stay very strong thanks to a great bassline – and oddly, there’s something about the overall melody that recalls underrated popsmiths The Adventures. At the point you might think this number could split fan opinion, a massive chorus seems to spring from nowhere…and with a full compliment of jangle and a huge vocal, it comes much closer to delivering a classic Wonder Stuff sound. Bringing in extra strings for the climax, the band add a few extra layers to an already complex tune, crank the volume and really cut loose. By the close of a particularly busy four and a half minutes, there’s a feeling that this is destined to be a classic.

The band certainly aren’t resting on their laurels with a bunch of tried and tested ideas here, either. ‘No Thieves Among Us’ finds them in an uncharacteristically heavy mood, opening with one of the chunkiest guitar parts on a Stuffies album to date. Steering that into a moody stomp, there”s almost an odd glam rock quality to the music and it isn’t until a harmonious chorus breaks through – almost like a sun’s rays – there’s anything the more casual listener would recognise as The Wonder Stuff. At that point, the band are truly on point with a rousing hook and multi-layered sound that is hugely complimentary to a fine vocal. If it doesn’t click on first play, or even the second, stick with it – it eventually gets under the skin. …And when it does, it threatens to be one of ‘Lucky’s best tunes. ‘It’s The Little Things’ is the kind of song that, again, sets out to thrill fans who love the rockier side of the band. Beyond a chuggy riff, it quickly branches out into a huge indie-rock jig where The Wonder Stuff meets the Levellers more aggressive material. Although Treece is very much in the driving seat, there’s some great drumming from Pete Howard and a stunning violin solo from Erica Nockalls to give everything some extra oomph. It isn’t quite as different as a couple of ‘Better Being Lucky’s key tracks, but it’s one of the best…and even better if played at volume.

Revisiting ‘Never Loved Elvis’ territory with a folk pop melody and maudlin strings, the lengthy ‘Map & Direction’ is slightly more downbeat. A lovely blend of the electric and acoustic, the music is the perfect backdrop for a sedate vocal, while the lyric – touching upon feeling emotionally lost – should be one that’s easily to relate. A number that’s enjoyable from first play, subsequent listens unveils a pleasurable sadness. There’s something uplifting about the way Erica’s violin soars between the wavering guitar lines, while Miles puts in a great performance. He seems to be pulling back, understating the song’s message at every turn, but when things are so good musically, that makes perfect sense. This doesn’t send the listener away with a feeling of strong positivity, but the number carries such a great melody, it provides a great album closer.

With eleven songs and no obvious filler, this is a very confident record, especially for a band so far into their career. Often with a push and pull between uplifting tunes and world weary lyrics, ‘Better Being Lucky’ has all the hallmarks of the Stuffies’ past, but still feels totally relevant to the time of its release. A near perfect adult pop-rock disc that shows absolutely no signs of a band merely coasting along, ‘Better Being Lucky’ is the strongest addition to The Wonder Stuff catalogue since ‘Construction For The Modern Idiot’ all the way back in 1993.