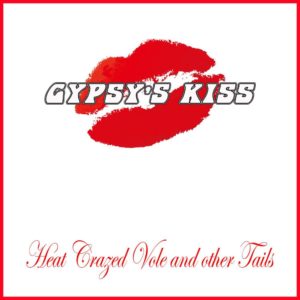 Some forty plus years after they wrote songs together, Gypsy’s Kiss reunited for a fund raising event in memory of the legendary Clive Burr, which led to the once unthinkable – the band went into the studio. Although their debut EP does not feature Harris, it actually includes material written during those formative years. Unfortunately, most of it would have been better off being left in the past as a rose-tinted memory, or as demos locked in a box marked “things that might have been”, as the majority of the material is pretty much as uninspired as the EP’s woeful Windows 95 clip-art sleeve design.

‘Settle The Score’ benefits from atmospheric opening with twin lead guitars that carry a faint echo of Maiden’s formative years. Unfortunately, after the first twenty seconds, everything takes a downhill dive, as demo quality production and uninspired pub rock musicianship take over. The drumming is ploddy, the guitar playing workmanlike and worse still, a stabbed keyboard seems to barely be in tune. Add a really bad vocal and it all adds up to a fairly bad mess that might have passed muster for a bunch of twenty year olds playing in a pub in 1975, but in 2019, it’s just a bit embarrassing. There’s a bright spark when a guitar solo actually demonstrates a lovely clean tone, but it’s nowhere near enough to save something that sounds like old AOR trotted out by a band who just don’t sound ready to share their work. They’ve potentially had four decades to shape up – it’s worrying to think this is almost the best they can manage.

Much better, ‘What Went Wrong’ shows off the band’s bluesy chops. Via a deep bass and old fashioned keyboard sound, the resulting moody rock falls somewhere between UFO circa 1974 and Deep Purple Mk. III. Moving into the main riff, the playing is solid and the overall sound is much better. Between the band’s deep love of a classic rock sound and the EP’s best vocal, it’s much easier to hear the roots of the band. Experincing guitarists Fraser Marr and Jonathan Morley trade off lead guitar licks, it’s obvious Gypsy’s Kiss enjoyed the process of revisiting the past and getting this track down for posterity, even if the results are average at best.

Beyond that, the rest of the EP is…incredibly unfortunate. Unfortunate enough to be of interest to no-one but their friends and families. The band’s best known song – thanks in no small part to a ridiculous newspaper headline from the 70s – ‘Heat Crazed Vole’ promises a lot via a multi-layered guitar sound and the kind of punch you’d find on a few classic UFO recordings. In fairness, it a reasonable pace, a much tighter sound, a solid guitar solo and a vocal that actually suits the track. It’s such a pity, then, that the band couldn’t take that and apply it to a better lyric. It’s not always easy to tell from the recording in hand, but frontman David Smith appears to be wailing “Heat crazed vole, heat crazed vole / He’s got no soul, that heat crazed vole” which, obviously, is utter balls and it’s amazing that the band aren’t embarrassed to share this with a now more sophisticated rock world. As a side note, clearly Steve Harris’s love of basic, near one-line refrains goes back a very long way…

‘Endless Pit’ kicks off with a perky bassline and a big crashy intro, but like ‘Settle The Score’, the show’s over once the vocal arrives. Smith rattles off a bunch of old hard rock clichés against a semi-funky rock tune – something that suggests four-stringer Robin Gatcum is a more than reasonable player stuck in a really dated band – but between the indifferent vocal and a sloppy lead guitar break, there’s absolutely nothing to get excited about. [For a much better take on this kind of pompy melodic rock, The Room are far more worthy of your precious listening time.]

Although ‘What Went Wrong’ is an reasonable semi-homage to UFO, the rest of this EP is bordering on terrible, fourth rate old tat. To use the band’s preferred vernacular, it’s pony…and hard to imagine that without Steve Harris’s direct involvement that even the most hardcore Maiden fan would want to hear this more than once. However, if you feel you must hear Gypsy’s Kiss, the best advice is to check out ‘What Went Wrong’ and then move on. As harsh as it sounds, you’re actually much better off having the band as a vicarious memory via Harris’s own warm-hearted reminiscence.