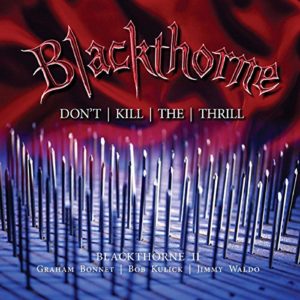 Two decades on, amid an ongoing reissue campaign of Graham Bonnet related materials – including the first ever release of Graham’s shelved debut LP ‘Back Row of The Stalls’ from 1974 – the tapes fell into the hands of Cherry Red Records. Released in 2016 as ‘Don’t Kill The Thrill’, the second batch of Blackthorne recordings are…loud. No…scratch that. They’re extremely loud. Bonnet still shows a tendency to oversing far too often, but luckily Kulick does his best to balance that with some of the best guitar playing of his career. He doesn’t always strike musical gold…but you can hear him working really hard throughout to make things interesting.

One of ‘Thrill’s biggest benefits is that the musicians haven’t been afraid to look at the musical climate around them and adapt. Unlike some, the record doesn’t take the full on grunge route, but certainly takes a very 80s sound and beefs it up with a (then) more modern edge. This works brilliantly on ‘Judgement Day’ a full scale metal tour de force with Bob Kulick indulging in an overly loud performance. His guitar work is grubby – much like a 90s Dio record turned up to eleven – and by the chorus, his insistence on “horsey noises” stretched to create a complete riff becomes very entertaining. The power and groove of the piece holds its own with the best traditional metal sounds, so in a way, it’s a shame that Bonnet insists on approaching his performance like a bison with a megaphone. On the other hand, it really gives a sense of how intense the recording sessions must have been. Not since The Who has a recording really captured so well a feeling of musicians constantly trying to outdo each other in terms of sheer volume.

With a heavy chug employed throughout, ‘Skeletons In The Closet’ suggests a Zakk Wylde influence and the moodier tones suit both Kulick’s playing and the natural flow of the band. With the music in a lower key, Bonnet adopts a lower register, often sounding more like “classic Graham Bonnet” and that results in a brilliant performance. The influence from various things happening at the time can be felt throughout, especially from Dio approaching heavier works and Soundgarden carving out a new sound in classic rock, but between a great vocal, an old fashioned howling lead guitar and a wall of parping keys occasionally punching through the wall of sound, there’s a lot here for the more traditional rock fan to sink their teeth into. Similarly impressive, the slow plod of ‘Dreaming In The Hideaway’ fuses some heavy Sabbath-infused riffs with a punchy bass. This provides a great musical base for Bonnet to stretch out an enormous vocal; one which, against, the odds, manages to sound powerful and dominating without resorting to unrestrained shouting. By the time the instrumental break steps forth, the riffs – if anything – feel heavier, which provides a great contrast for the solo itself with Kulick keeping to a fairly 80s tinged sound full of string bending goodness. By the time this track fades, you’ll realise Blackthorne had a lot in their favour. It’s a shame the world didn’t get to hear that often enough…

‘Man In The Black Hat’ starts out just as promisingly, with Kulick driving home a dirty, slightly downtuned riff, but the excitement of the music doesn’t last. It’s one of those tracks where a great riff ultimately has nowhere to go, and so, invention is traded in for pure volume. Despite Bonnet starting out well, by the last verse and chorus, he’s belting his lungs out like a man without any real control and by the time ‘Sanctuary’ rolls around, he has actually given up all pretence of actually being able to sing at all. He spends a whole four and a half minutes attempting to destroy his vocal chords and people’s ears. Somehow, they’ve managed to capture a man screaming and hollering so intensely, you can actually hear the phlegm rattling in the back… It’s really hard to believe this is the same man who lent a great talent to Rainbow’s ‘Since You Been Gone’. Going for a power metal vibe, ‘Save Me’ pummels at speed with a riff that almost seems to be modelled upon melodic thrash, which given Graham’s years spent recording with Chris Impellitteri is a more than solid fit for his voice. Kulick, meanwhile settles into a jagged groove that isn’t a million miles away from the early solo works of Marty Friedman accented by a bluesy metallic noodle, resulting in a cracking tune. The use of a rigid drum machine is a constant reminder of the material’s unfinished state (as is the unexpected early fade), but overall this has the makings of one of the best tunes from Blackthorne’s short existance. Although not quite as effective, ‘Twist The Blade’ thunders from the speakers like a 90s reinvention of Impellitteri and Malmsteen’s more melodic affairs, showing Kulick to be a master of speed. He sounds like he’s having a great time playing while, musically speaking, Bonnet retreats into his comfort zone, just about clinging on to a melody. In lots of ways, this tune – and ‘Man In The Black Hat’ – best sum up Blackthorne’s short existence: huge potential, sometimes hampered by their desire to attack everything full-on.

Elsewhere, the title track features a huge drum sound that quickly subsides with the arrival of a fearsome guitar chug that combines the best of an 80s driving sound and a 90s melodic downtune. It’s here that Blackthorne manage best to combine all of their skills: Kulick’s lead work howls and squeals, bringing a great counterpoint to a riff that might otherwise sound heavy handed and Bonnet – attempting the full vocal range – is able to steer the band through a surprisingly old fashioned melodic metal chorus. You can hear future echoes of some of his Graham Bonnet Band work here, and all things considered, it’s another of Blackthorne’s best numbers. ‘Wild Inside, meanwhile, is even better. In an unexpected twist, Bonnet finds a voice that’s almost exactly like that from his hit-making past in the late 70s, whilst Kulick makes the best use of his brief Kiss connections, delivering some great 80s licks set against a chorus that could’ve been on loan from Paul Stanley in 1984. All things considered, this is the most un-Blackthorne-like of any of their recordings. It’s also a strong contender for their best.

Graham’s voice can be particularly hard on the ears during these session recordings and some of the material sits uneasily between a belting 80s metal sound and a 90s influenced grittiness. However, when these recordings work – which accounts for about fifty percent of the time – they have an oddly fascinating quality.

For the more patient Graham Bonnet fan, this release provides excellent value, since the eleven tracks captured during the second album session recordings are joined by an extensive amount of live material. Mostly taken from the Foundations Forum in 1994 and Fresno in 1992, the audio quality leaves a lot to be desired, but they have an historic importance. Among the seventeen live cuts, it’s interesting to hear Graham having a stab at ‘Since You’ve Been Gone’ with a crunchier band in tow…even if the results don’t always work for the best. Their heavy take on Free’s classic ‘Wishing Well’, on the other hand, works out well for all concerned and is proof enough that Bonnet still has a great voice when scaling things back about three hundred decibels. The live material is worth persevering with for this alone. Of the Blackthorne originals, ‘Desert Song’, ‘We Won’t Be Forgotten’ and ‘Cradle To The Grave’ sometimes make his bombastic voice seem better, but the performances still all too often come with an over-singing that makes his Rainbow years seem like a distant memory. Still, with well over an hour’s worth of fan-sourced live material, for the Bonnet obsessive, the live material is a welcome bonus no matter how rough and ready the source.

On the basis of these rediscovered tapes, the second Blackthorne record would have been flawed, but often a huge step up from the debut. Kulick’s unsubtle guitar work hits the mark more often than not with its aggressiveness; a factor which makes the rediscovery of these recordings – both studio and live – very important. However, despite a few very strong tracks, the feeling of quantity over quality makes ‘Don’t Kill The Thrill’ a fan-only affair.