The first half of 2018 has seen a few excellent gigs that have helped put the Ramsgate Music Hall on the map. The venue has played host to a warm up gig by Pulp legend Jarvis Cocker (a show that sold out in under a minute), energetic sets from Shonen Knife and Kolars as well as an evening of acoustic English whimsy from the legendary Robyn Hitchcock. The venue could now legitimately be considered a tiny giant. Tonight promises to join the list of legendary performances as the venue is host to a Throwing Muses double bill, with solo sets from ex-bassist Fred Abong and singer-songwriter Kristin Hersh.

2018 has been an important year for Fred. He’s made a long overdue, proper return to the music scene after many years. He’s also recorded new solo material, the ragged ‘Homeless’ EP, and he’s been giving it some hefty promotion throughout the summer whilst on the road with Hersh. This is the second of two appearances at Music Hall and even though it’s a school night for most tomorrow, it’s still a sell out.

Taking his place centre stage in a muted coloured shirt and bright footwear, Abong is immediately at ease and his casual demeanour is the perfect fit for the new songs. In fact, it helps to give far more of a picture of where those songs were born; there’s no flamboyance here and that’s something that’s instantly endearing. His set opens with ‘Rattler’, a key track from the new EP, which is loaded with natural vocals a selection of hard chords punctuated with a dark discord. Sounding more like a piece inspired by Lou Barlow than ever before, he grabs the attention of a few audience members while others seem a little unsure if they should clap once the song comes to a premature end. For those who already know the EP, they’ll recognise this is a regular occurrence in Abong’s new works – there’s no desire for repetitious ideas: like that of Robert Pollard, the bulk of the material sets up an idea and then bows out seemingly as quickly. Much smoother – and an important moment in winning the audience – ‘Hi Avalon’ is more tuneful, with a waltzing arrangement coming across in a much more stately fashion than its recorded equivalent. During the sparser and haunting ‘Plum’ Abong’s voice is slightly husky and he’s possibly more into the music than some of those watching, but for audience members who enjoy relatively lo-fi acoustic work in the vein of the aforementioned Lou Barlow and Sebadoh, this provides another great insight into the working musician and his skeletal songs. 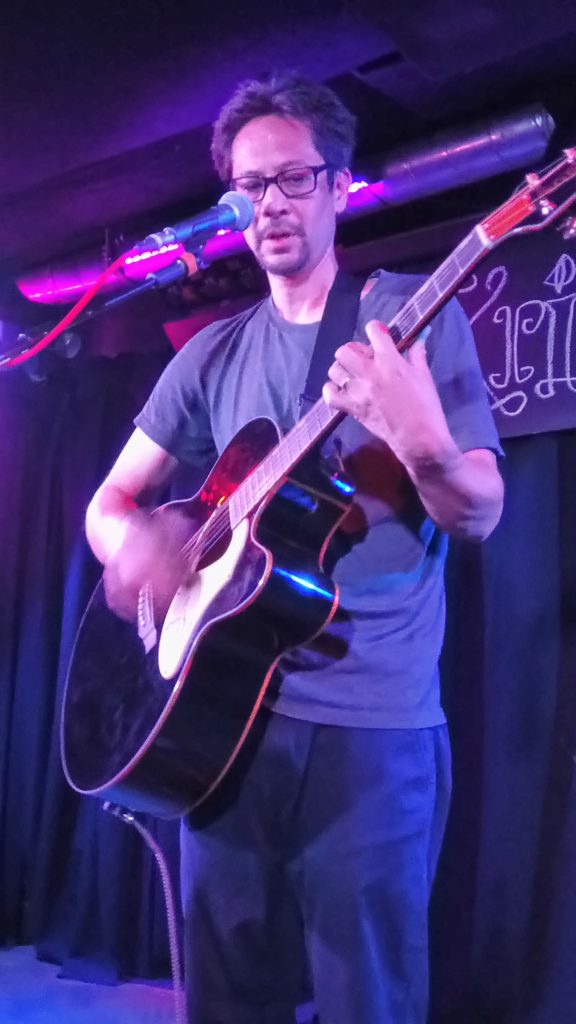 Since the ‘Homeless’ EP features just six tracks, this evening also finds Fred digging further into other material. It’s all his own work as opposed to any nods to his past with Throwing Muses and Belly, but it’s interesting to hear ‘Messy’ and ‘Pit Bull’ [previously ten year old full band demos] reworked into a solo acoustic format as well as ‘Wedding Tune’ & ‘Bliss’ [both from Fred’s impossible to find ‘Double Widow Secret’], slotting in seamlessly with the brand new material, despite being separated by a number of years.

For those who’ve already immersed themselves in the still fresh studio recording of the ‘Homeless’ EP, it’s the end of the set that brings the biggest highlights. During a spirited take on the title track it’s great to witness Abong alternating between the complex finger-picked verses and more aggressive chorus chords with ease. Better yet, ‘Equinox’ – an EP highlight – really helps to bring this set a strong sense of alt-melody and even for those who’ve not heard it previously, it’s probably the track that’ll prompt further investigation. “That’s it for the difficult stuff”, he jokes before breaking into a particularly angry ‘Cannery’, a tune that seeems even more pointed than the studio recording.

While Abong’s insistence on casting out sharp, quick ideas in lieu of repetition mightn’t suit everyone’s tastes, after a slightly slow start he’s gone down very well this evening, even among those who aren’t necessarily out to see him. With this tour marking a new phase in his on/off life as a musician and ‘Homeless’ gaining some positive online notices, let’s hope we see him again.

Read a review of the ‘Homeless’ EP here.