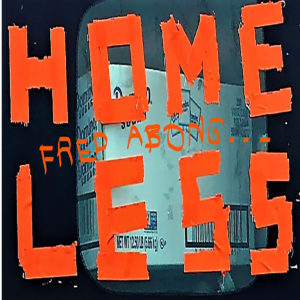 Rhode Island musician Fred Abong will be familiar to most due to his past connections with Throwing Muses and Belly, bands related both by blood and a musical family tree. While Kristin Hersh and Tanya Donelly have remained reasonably prolific since the 90s, Abong chose to slink back into the shadows. In his own words, he’s “always found songwriting a mystery”, but was encouraged by Hersh to capture a few musical ideas on tape in 2018. The resulting EP is thoughtful, minimalist, sometimes even bleak, but is all the better for it.

The underlying bleakness within the material wastes no time in presenting itself, since Abong offers a stark opening line in “If Jesus could wash my feet, I still wouldn’t have a hope in hell”, before presenting images of burning buildings and hanging out by dumpsters. …And it’s not even the title track. This opener, ‘Plum’, is an uneven listen since the strong imagery is later kicked to the kerb by mentions of “scratching his ass” before rhyming thumb with plum in an almost nursery school fashion (or something resembling one of Noel Gallagher’s best lyrics). Within two minutes, ‘Plum’ shifts – perhaps rather deliberately – from despairing to unsettlingly flippant, almost as if the ghost of Syd Barrett watches over everything. With this, in many ways, this solo release begins with its weakest cut but, even then, the use of repetitive finger-picked guitar lines sustains enough interest throughout. Swapping the intricate for the hard-strummed, ‘Rattler’ presents a fantastic, ringing chord progression that results in a huge melody, before Abong derails things with a selection of deliberately discordant ideas, both musically and lyrically. Again, it’s hard not to draw at least some parallels with Barrett’s ‘Madcap Laughs’, especially in the way that the melodies are so fragile that just one discord can change everything. Very important to Abong’s core sound, his influence from Kristin is also there throughout the whole EP, but especially so in the way this track is left hanging without a clear conclusion. For those who like their acoustic work to be less folky and more jarring, this number is a must-hear.

The title cut almost sounds like the musical equivalent of ticking time. Here, Abong returns to a more intricate style, this time using a beautifully clean tone. His insistence on simple repetition lends the piece an immediacy but also an unsettling edgy quality. It’s relentless approach is the perfect counterpart to the lyric which explores the smell and depression of homelessness, replacing the oft-used black dog metaphors with that of a sleeping lion. If things weren’t unsettling enough, the contrast between the lovely, clean guitar work and Abong’s slightly atonal vocal is brilliantly executed. ‘Equinox’ allows an even better look into Fred’s approach to acoustic sounds as he mixes a timeless finger-picked style that could have been drawn from an old Bert Janch LP with a slightly downcast quality that reflects his contributions to the 90s alternative scene. Particularly pleasing is the way the no-frills recording allows the sound of sweaty fingers upon the frets to bring extra atmosphere. As before, his natural vocal style will not please everyone, but on this track especially, a throaty rattle is the perfect fit for lyric that suggests we’re not perfect and only a small part of the cosmos but we can make difference and try anything. Clocking in at under two minutes, this could feel like an interlude, but with Fred’s thoughts being glued even further via a great melody, it ends up being one of this EP’s most important numbers. A mid-paced, heavily strummed waltz, there’s something about ‘Hi Avalon’ that echoes a couple of very early Throwing Muses tunes. In that respect, it’s instantly familiar; with a wonderfully live sound giving the guitar a genuine sense of presence, it grabs from the very first listen. Vocally, Fred remains on the gravelly side and like ‘Rattler’ it almost appears to tail off at the point where you’d expect a key change and big climax, but the idea itself is so strong in its simplicity that it stands up well enough among this collection of musical sketches.

While the first five tracks are enjoyable, Abong saves the EP’s very best song for last. ‘Cannery’ utilises a much fuller guitar sound where slightly downtuned tones really rattlie the bottom strings. Haunting and almost autumnal, there are strong echoes of Chris Cornell’s acoustic tour-de-force ‘Seasons’ during the intro, whilst throughout, the solo voice and guitar angle is less fussy, sounding very much like a few pieces from the Greg Jones album ‘Like A Movie’ (a cult classic heard by about fifteen people). There’s still an inherent sadness in Abong’s vocal, but that only accents the emotive feel of the tune further. While everything on ‘Homeless’ is worth hearing, this is essential for fans of most 90s alternative music, or for those keen to experience a familiar talent in a new way.

This EP is of the moment, almost as if Abong has presented his working demos as a finished product. However, since some of these songs play out like sketches, that’s actually the ideal send off. Any more than that and his fragile ideas could be smothered or even swept away in a heartbeat. Within this selection of two minute nuggets is the sound of a distinctive talent; someone unafraid to share imperfections and emotive scars. For long-time fans of Throwing Muses, ‘Homeless’ presents a brief but welcome look into the heart and mind of one of the band’s less championed talents.