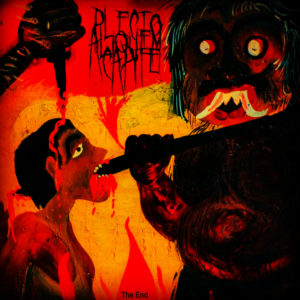 The intro to ‘Parasomnia’ sets things up brilliantly, with a crushing riff that comes across with an intense post-hardcore tone, but within thirty seconds or so, everything descends into a near unlistenable musical hell. Pneumatic drums dictate the best part of the noise which follows; the guitars switch between atonal clanking and a circular, extreme metal blast and it’s insanely heavy. That, however, is not the problem. The big issue comes with the vocal, which just happens to be the most affronting, ugly noise this side of one of Mike Patton’s Fantomas experiments. If there are lyrics, absolutely none can be heard: instead, there’s a solitary retching noise, before multi-tracked screams, growls and more retching gives the feeling of a huge crowd of people screaming for their lives while either trapped in a burning office, or being brutally tortured. That, and pretty much only that, is what you’ll remember most after listening to this release…and that’s not good. As if to present the other half of a whole, ‘Hypersomnia’ offers similar intensities, but switches the hardcore and thrashier riffs for something a touch closer to groove metal. While this makes Plecto sound more accessible from a riff based perspective, the vocals are on hand again to ensure that this is an aural offence in every sense. Singular voices scream like sirens…deep growls lean towards death metal influences, albeit without ever being tempted to drop into the genre’s typical grunts. The sounds in between are a mess, sounding like a recording of a possessed soul speaking in tongues while a demented cackle punctuates the turbulent noise. If you can make it past these tracks, you’ll listen to almost anything, especially if it provokes an extreme reaction.

The slower and aptly titled ‘Grief’ is the closest things come to anything within the black metal universe, as twin lead guitars play a repetitive riff – and for the first time, Plecto shows they can deliver at least a shard of melody. The players aren’t especially tight, but what they seem to lack in complexities they more than make up for with volume and force. As the riff takes a hold and the howling vocal comes forth with almost a siren’s call, they could almost be playing a joke version of the intro from Black Sabbath’s ‘War Pigs’. Soon enough, though, the intensity of this becomes too much. The unchanging riff still has a certain appeal, but the vocals – by this time, replicating a disturbed soul sobbing, crying, sniffling and howling (presumably in some grief-stricken frenzy) makes everything too hard to bear. An unexpected clean guitar riff comes in at somewhere near the mid point, but don’t expect any melody, as vocalist man grumbles into the microphone, makes a few demonic noises, hyperventilates and sniffles some more, making sure the Mike Patton influence to his performance art is about as subtle as a mallet. A jagged riff and more grumbling leads into a reprise of the opening riff, this time tempered with a couple of extra flourishes. No extra melodies, of course, so it’s been a very ugly six minutes all around. The eight minute epic, ‘Loss’, bringing another angle to something the band have also tagged “grief metal” is little more than the slowest of sludge, churning slowly while a man croaks and howls for the duration. You will not make it through…and if you genuinely enjoy listening to this, then there’s something very wrong with you. Chucking in a couple of atonally played, bluesy lead guitars just isn’t enough to make it any more palatable.

There’s a fine line between arty and wanton noise making and these Sri Lankan musicians step across it often. In fact they don’t as much step across it, as dance gleefully back and forth, safe in the knowledge they’re not just challenging ears but offending them…and very likely sending away potential listeners in droves. As noisy art rock goes, this EP hard going to say the very least. Fans of the most challenging stuff on the Ipecac label might just find something to enjoy here, but it’s almost guaranteed nobody else will…