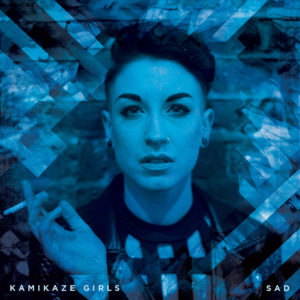 Aiming to “stamp out gender stereotypes in music for good”, UK lo-fi duo Kamikaze Girls not only identify with the feminist anger of the 90s riot-grrrl movement, but also do so whilst being fifty percent male. Their music, an angry melting pot of riffs and social commentary, is unrelentingly vibrant.

Their debut EP, ‘Sad’, follows various single tracks that have floated across the underground and with it brings five slabs of noise that manage to be contemporary for the time of release but also besotted with the 90s. Beginning with swirls of distortion and feedback, ‘Hexes’ doesn’t punch the listener in the throat straight away, preferring instead to stir up a feeling of dark unease, eventually storming out of the gate with a hard and bouncy riff that sounds like a twisted work comprising the best elements of ‘Live Through This’ era Hole and the driving rock of Royal Blood. Somewhere underneath the wall of sound emitted by her guitar, Lucinda Livingstone mumbles and sneers, tackling issues of relationships and of the masculine ideals that women have to put in hard yards to look good, all mixed under a potent cloud of mental health issues. “I’m pulling out my eyelashes / You’re fast asleep in bed”, she barks, while the distorted guitar lines grumble a deep and atonal musical hate, with the protagonist eventually going further to suggest it’s okay to accept these issues exist. With the riffs appearing to gain intensity with each passing bar – or maybe this raw anger just makes the listener feel as if being pulled under – it’s a strange relief that comes when a brief interlude that teases with dream pop and an odd Smashing Pumpkins-ish heavy psychedelia emerges somewhat unexpectedly. ‘Stiches’ attacks with a similarly full sound and with a relentless distorted edge throughout. A spiteful throwback to the summer of 1994, there’s something in this tune that sounds like an uncomfortable experiment between Sleeper and Babes In Toyland. The unforgiving production style means everything sounds loud even when played quietly – the bouncing riff, always dominant, is an instant classic while the vocal somewhere within the distortion tears itself apart while never settling; one moment delivering a sugary chorus melody, one moment an experiment in screaming furies. Somewhere between the fuller sounds, the drumming is solid and occasional appearances of rising discords carry the heart of the original riot-grrrl movement. No matter from what perspective you look at this track, it’s an instant classic.

Taking a side-step into slightly heavier and slower moods, ‘I Hate Funerals’ tears open those days where depression just becomes unrelenting, almost messy, but the way Lucinda screams “I hate everyone” kind of gives these tumultuous feelings a universal voice, before sounding even more adrift under voluminous noise. Not so much about actual funerals, of course, but how days have a dark side, this track – along with ‘Stitches – is the perfect encapsulation of both the Kamikaze Girls sound and social ethos. ‘Lazyfuzz’, meanwhile, straddles the topics of feminism and self-worth, while throwing out another superb riff, this time as if channelling both Echobelly and My Cruel Goro. Hearing the more sombre tones of Lucinda’s voice meeting a more melodic backdrop shows the band have a musical range and Conor Dawson’s heavy but sparing drum work is impressive with its restrained approach, a feeling amplified at times by a sparing use of cymbals. Bringing everything to a climax, the title is crooned loudly with a natural flair – caring less about perfection than emotion – and, in all, it’s another great track on a filler free release.

Last up, ‘Black Coffee’ rattles along at speed with a clanky rhythm, it’s stripped back feel allowing the toms to push forth, while a naturalistic vocal brings out the inherent Britishness in Livingstone’s vocal. Despite the drums being backed by various sound shapes created from feedback, the start of this number stands out as being markedly different from the bulk of KG’s material, but soon enough there’s a full compliment of 90s guitars to bolster this tale of necessary stimulants to just get through another day of sadness. “Without you, I’d sleep forever” belts Livingstone with absolutely no apologies, before a barrage of unhinged screams bring forth other emotive messages of unease; some audible, some not…but it’s the frankness of the performance that – perhaps more so here than before – shows off the band’s key message that emotions are not meant to be bottled or allowed to fester. It’s a real outpouring of emotional disquiet that musically, vocally and even lyrically is so intense it’s almost too hard to listen if approached in the wrong frame of mind.

For fans of mid-period Hole, the noisiest aspects of Veruca Salt (especially ‘Spiderman 79’) and Dinosaur Jr. – there’s something in the more angular style of the last track that is even reminiscent of Wire – ‘Sad’ is more than the sum of its influences. These songs could endlessly push emotional buttons with their unapologetic feelings of turmoil. The EP mightn’t be especially ground breaking musically, but the openly emotive lyrics can sting like a marriage of acid and paper cuts. The whole package is lovingly retro, it’s got a sneer and a spiteful edge; it’s also playful in the way it throws emotions into the air without care of where and whom they hit. There’s a total legitimacy in Kamikaze Girl’s candid approach. Being sad rarely felt so good.