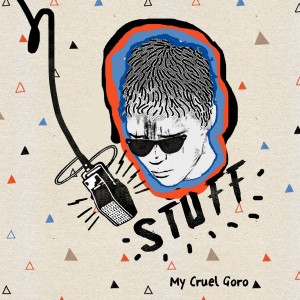 My Cruel Goro’s debut EP bought back memories of the 90s, recycling the most energetic parts of bands like Ash and S*M*A*S*H with a touch of the multi-national trio’s own charm and a genuine gusto. DIY blogs gave the release some very positive notices and there was a definite feeling the band would be back with new material pretty quickly. Just five months down the line, the band teased with a new track ‘Lost E’, which proved early fan enthusiasm was not misplaced and also suggested that the upcoming release would be better than their first.

That second EP, ‘Stuff’, is superior on every level. The opening track, ‘It’s Fake’, in particular, knocks everything from the debut EP into a cocked hat. The riffs are sharper, the recording budget sounds bigger, the chorus hook is so simple it’s either dumb or hugely catchy…dependent on your personal viewpoint. It’s opening riff sounds a little like a noisy take on an early Echobelly track before thrusting head first into a tune that’s equal parts crashy and choppy; it’s sheer volume is enough alone to impress lovers of guitar driven indie-rock with a punky edge. The vocals are delivered with real enthusiasm, but it’s the presence of a wantonly ugly lead guitar break that drives this track squarely over the edge in terms of energy. It’s a genuine three minute thrill. With a repetitive almost one chord churning riff, the aforementioned ‘Lost E’ has an even punkier spirit, like the bastard child of S*M*A*S*H and The Fall’s ‘Industrial Estate’ (albeit played in tune). In under two minutes, MCG give their all, resulting in perhaps one of the best ever examples of their indie-punk style. A distorted vocal adds to the fun and, as before, a careening lead guitar break absolutely shreds. New listeners should check this out for a taster.

Adding a touch more melody without losing too much of the general drive in the band’s performance, ‘Black Trash Bag’ allows the bass to come through a lot more and Andrea Marcellini plays with a tough intent, his fat strings buzzing and lending a real edge. With a bigger focus on a harmonious vocal, frontman Andrea Maraschi pushes his voice a touch more, shifting between his typical shouty approach and almost a tenor sound, while his thrashy guitar is happy to take a step back to accommodate his more confident style. Like an old Ash b-side, this has all the makings of a number that, while not as genuinely exciting as ‘Lost E’, will certainly sound much better with the passing of time…and the juxtaposition of more accessible tune and overtly aggressive lyrics only adds to the potential interest. Sporting a great intro, ‘Loverdose’ begins with sharp chords, not too far removed from early Wire; it’s almost post-punk angles are superb without being too arty. Knowing they’re onto a good thing, the band recycle this for the bulk of each verse, while literally exploding into a shamelessly noisy rock backdrop during the chorus . A contender for best track this time around, its Wire-esque, pointed riffs combined with the kind of unrestrained, pogo-baiting riffs – usually reserved for The Hives – make for essential listening. Mixing power and melody against a solid backbeat, ‘I’m Not From This World’ hits hard with a riff that’s inspired by early Ash. Like ‘Black Trash Bag’, it’s noisier elements are tempered by a great vocal melody, but on closer inspection, it’s some busy bass lines which are the most impressive aspect of the tune. Hearing Andrea working a busy rhythm against Tomaso Adanti’s aggressive drum parts, it’s clear that somewhere beneath the distorted guitar riffs there is a smart rhythm section at play. …And as the whole track inevitably descends into feedback, you might find yourselves wishing this had been more than an EP.