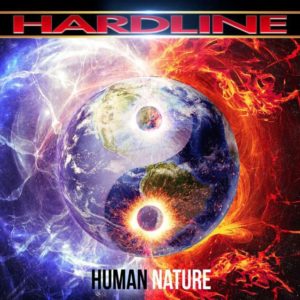 Back in the early 90s, the Gioeli Brothers (vocalist Johnny and guitarist Joey) attracted the attention of Journey guitarist Neal Schon. After drafting in Bad English drummer Deen Castronovo and forming Hardline, the band’s debut album ‘Double Eclipse’ was well received by the melodic rock community. It took a full decade until a follow up belatedly appeared and another eight years for the third Hardline album to materialise. You could say that Hardline make Metallica and Guns N’ Roses appear rather prolific. 2016’s ‘Human Nature’ – the band’s fifth studio album – reinstates guitarist Josh Ramos, absent for 2012 offering ‘Danger Zone’. This is something that will undoubtedly please fans, but it does mean that Hardline have featured a different line up on each release. There are some that have long thought that, in this repect, the band are basically Johnny Gioli and whomever he can find at the time of recording – and they’d probably be right – but if Johnny says it’s Hardline, then Hardline it is.

Apparently, with ‘Human Nature’, Gioeli wanted to create “an album that sounded like [Hardline debut] ‘Double Eclipse’ combined with the dynamics of modern day rock”. If by “modern day” he means 1990, then that’s great, otherwise it’s failed at the first hurdle. Especially so, as he also also wanted something “very heavy and in your face”. If that was the case, then why did he hire the song writing and production duties of Alessandro Del Vecchio and not someone actually capable of giving him those aspects to his music? Someone actually able to add a huge Tremonti like sound to the songs? Is it some kind of Frontiers Records contractual obligation that Del Vecchio be used? As with most things where that man has had a sizeable creative input, what we have here is a collection of very safe and predictable melodic rockers. There are a couple of standouts, of course, but it would be foolish for the more demanding listener to approach this album expecting much more.

‘Where Do We Go From Here’ opens the disc with one of its more upbeat tracks, with guitarist Josh Ramos marking his return with a fairly tough riff – the kind that filled the Rated X disc with Joe Lynn Turner – backed by old style organ and a thumping drum. There’s a decent chorus bolstered by harmony vocals and as the track progresses, the driving melodic rock takes everyone back to the ‘Double Eclipse’ days. That chorus should have been the highlight, but Ramos’s dirty guitar solo makes a far stronger impression. Any time that Johnny Gioeli stops singing, it’s a definite improvement: throughout this track – and, indeed, most of this record – he bellows at full pelt, his voice all too often a hideously overbearing foghorn. Still, some people seem to love it, and if that applies to you, you’ll be well away with this. With a similar chunkiness but more of a swagger, ‘Nobody’s Fool’ comes across in places like Hardline plays Jorn Lande, but any promise is killed by a horribly clichéd chorus that could have been farmed out to a thousand and one third division Euro hard rockers.

By track three, Del Vecchio’s ugly, unrelenting mix that pushes the guitars way into the red finally takes a step back. At least for all of a minute or so. The title track starts out like a syrupy piano ballad and Gioeli manages to rein in his bombastic tendencies accordingly. By the end of the first verse, however, it’s back into the huge chords and overdriven guitar sounds as Ramos crushes everything and Gioeli croons like a bloater in possession of a megaphone. The dirgy and slow pacing makes this almost unlistenable, despite the band undoubtedly thinking of this as a fist-clenched, emotive masterpiece that could take on the genre’s best. ‘United We Stand’, meanwhile, opens with a wash of pompy keyboards and chunky riff, before subsiding to reveal a mid-paced plod where the bass rises up to join the lead vocal. On the plus side, Ramos drops in a few nicely played bluesy fills, but obviously that’s not enough to save things. Returning to the big riff for the chorus, Gioeli sings at full pelt and the more melodic edge of the track that threatened to come through is completely lost. Luckily, Ramos is on hand with a short but brilliantly played solo.

‘Where The North Wind Blows’ – a vast improvement – plays out with a great blend of chug, pomp and melody, with Ramos in command of a great riff. This track, sounding like a cross between ‘Princess Alice’ era Magnum and UK melodic rock stalwarts Ten, is big – but unlike so much of this album – it isn’t big purely for the sake of it. Like the best Ten songs, it just wouldn’t work any other way: Ramos plays up a storm when its time for the featured solo, Sunstorm‘s Francesco Jovino hits hard behind the drums serving up just the right balance of melody and power, even Gioeli doesn’t manage to overstretch himself. Bringing out the best in the band, ‘In The Dead of the Night’ features a pleasingly punchy chorus set against a more melodic verse. The pumping bass and rare appearance of cleaner guitar work puts Hardline more in line with Harem Scarem, with Ramos turning in some fine guitar work and a shamelessly old-school keyboard solo thrown in for good measure. It’s one of the few times that Hardline genuinely sound both inspired and inspiring. This track is the album’s highlight by a country mile – Hardline’s 2016 gold standard – but there’s still a feeling that the band really deserved a more sympathetic producer/mix.

‘Take You Home’ is the big piano ballad as teased previously…but it’s best skipped. Johnny blows his way through each line like a man without any understanding of subtlety. While the musical intent is more than obvious, it might be one of the worst tunes in the Hardline catalogue – it’s definitely ‘Human Nature’s low point. It’s almost as if the band know that all great melodic rock records include a ballad, so this is here by default. ‘Running On Empty’ churns out more hard rock that’s power over style, relatively good album filler – but it’s exactly that; one of those tracks you might enjoy at the time of listening, but too quickly blurs into the memory with so many other similar hard rock tunes, happy to live in a musical past. Fortunately, ‘The World Is Falling Down’ joins ‘In The Dead of Night’ to lend another great track. With speed and precision, the band set about a solid piece of driving hard rock. The chorus is big and catchy, the riffs are huge like the culmination of Heaven’s Edge and Rated X, with Ramos mixing up the huge and meaty with some pleasing choppier styles. Gioli, too, rises to the occasion with a surprisingly on point performance. Stylistically, it’s as if Jorn were covering 90s legends Shotgun Symphony and with one of the album’s stronger choruses, this would automatically be a recommended listen…and then Ramos offers a superb guitar break. It’s not quite up there with ‘In The Dead of the Night’, but all the same, it’s a shame Hardline couldn’t be this compelling more often.

‘Human Nature’ is all too often melodic rock played by numbers – the kind that could have been issued with any band name on the box and the melodic rock purists would instantly go into a collective middle-aged orgasmic overload. It is what it is: there are three genuinely great tracks, but honestly, though, why bother with this when you’ll undoubtedly own so many other superior albums already – Hardline’s own ‘Double Eclipse’ included?