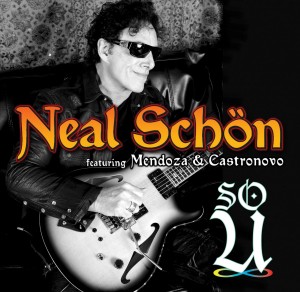 Teaming up with sometime Whitesnake/Black Star Riders man Marco Mendoza (bass/vocals) and Journey/Bad English drummer Deen Castronovo, our guitar hero fronts a particularly fine power-trio. What’s more, most of the material should please those looking for something more accessible than before– ie: not wall to wall jazz-fusion.  It is also a record with a strong feeling of balance, since although the majority of material is song oriented, there’s still plenty of room for all three musicians to cut loose from time to time.

Kicking off with the first of two very gritty blues rock tracks, Schon stands a strong chance of winning over listeners who want meat and potatoes toughness over flashiness straight away.  ‘Take a Ride’ employs an overdriven and incredibly dirty riff, complimented by a hard beat and a proper old-school attitude.  The lead work comes intermittently – often filling space rather than making a big show – and the heartfelt vocals are well suited with a sound that falls somewhere near the younger Glenn Hughes.  Like the lead work that fills occasional spaces during the verses, the featured solo is low key at first working a selection of low and dirty notes; it is only with the re-introduction of the vocal Neal eventually dishes up something finer via few vibrato-led tones.  During the track’s coda, everything drops to a more understated groove, with flashes of lead guitar jostling with Fender Rhodes funkiness.  In terms of bluesy-rock, this works well – simple and very direct, creating an attractive opener.  Another heavier number, ‘On My Way’ is more of a workout for Castronovo, leading the band with some double bass pedals and a tough drumline, over which the guitars bring similar dirty tones as before.  There’s not really any different ground explored here, but that’s fine enough – it feels like the perfect bedfellow to ‘Take a Ride’ presenting the group in a mould closer to Pat Travers and Javier Vargas than Jan Hammer or Jeff Beck circa 1975.  Of course, though, with Schon’s style and sense of occasion – not to mention many, many years of experience – the end results are better than most aggressive blues-rockers could muster!  In a similar field but perhaps with an extra ear on melodies, ‘What You Want’ is a cock-sure workout blending bluesier playing with a hard rock sound that’s dangerously close to ‘Dogman’ era King’s X – a comparison heightened by extensive usage of almost possessed gospel wailing a la DuG Pinnick.  While this number starts strongly though, it loses momentum in the middle with too much focus on a blanket of keyboards which aren’t particularly melodic.  This is swiftly made up for, however, with Schon’s featured solo being heavy on the whammy bar, bringing everything back towards the main riff.  Those who like things tough but melodic should find some pleasure here.

Okay, so what if bluesy rock really isn’t your bag? For you, there are a couple of decent AOR/melodic rock numbers in ‘Love Finds a Way’ and ‘Shelter’.  The latter has a fairly by-numbers rock arrangement but benefits strongly from having the kind of hook which worms its way into the brain, whereas, musically speaking, ‘Love Finds a Way’ is far superior musically but has a much weaker hook. With a lilting melody and well-executed guitar break, this hugely melodic piece could have found a home on a Journey release, especially considering the strong vocal lines would be perfectly suited to Arnel Pineda.  The inclusion of a one-line chorus weakens its impact a little, but the Steve Perry-esque approach to the longer notes makes it very familiar and an instant highlight.

A throwback to the previous album, ‘Exotica’ is a furious jazz-fusion workout, with Schon offering some great playing via some really edgy and aggressive tones in places for the most part.  While his tone is great – whether hammering at the fretboard or offering huge sweeping themes – and it shows why he’s so well respected in his field, in many ways, this piece belongs to the rhythm section.  Castronovo attacks his kit in a fashion that Journey’s much loved pop/rock never requires, while Mendoza shows off his fretless skills.  With a flurry of notes and a surprising ease Mendoza proves he’s got enough chops to join a fusion-based outfit full time and is, perhaps wasted as a Whitesnake sideman [especially given the state of The Cov’s vocals by the 2013 tour].  While the album includes no filler material, naturally some numbers are stronger than others, but the title track is a really a cut above. Throwing many of Schon’s styles and techniques into one giant ten minute epic, the tune which starts in an almost new age fashion, with lovely clean-toned guitar work for a base.  The shimmering guitars are complimented well by keyboard sounds adding a back-masking effect and then less effectively by a falsetto vocal.  By the time the intro subsides and the trio find their feet, there’s a whole world of neo-psychedelia awaiting, as Schon tackles a few beautifully soaring guitar lines as his voice harmonises with Mendoza.  A quasi-sixties throwback, the ensuing seven minutes bring a whole world of rainbows and love, with the band providing the best music of its kind since those Ty Tabor tunes on the first three Kings X albums.

On initial listens, ‘So U’ often lacks the challenging edge and sophistication of its predecessor, often taking what is obviously a simpler musical route, but listening closely reveals a world of great playing. It’s also a very solid work that covers a mixed musical ground in an attempt to please most listeners on some level – and unlike so many other albums that spread themselves so thinly stylistically, it succeeds in its aims without ever feeling as if any direction is lost.  For those who’ve delved into Schon’s solo work prior to this point, this album will be a must have – after all, those listeners will already be aware that Schon’s brilliance often comes from his eclectic nature.  For the curious, this wouldn’t be such a bad starting point either – it’s not a perfect record by any means, but certainly has plenty to recommend it.