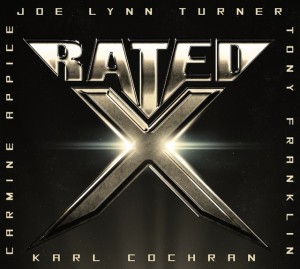 Joining the musical ranks here are a few very familiar faces.  Drummer Carmine Appice has lent his talents to many projects over the years – including two enjoyable King Kobra records in the 80s and the Mothers Army project in the 90s (a band that saw him previously working with Turner), while guitarist Karl Cochrane steps in for plenty of fretboard action.  As a session musician, the guitarist’s previous credits include work with Ace Frehley and Eric Singer, but his appointment here – like Appice – will be due to previous associations with Turner.  Filling the bassist’s position is Tony Franklin, a master of the fretless whose experience includes work with a good proportion of the classic rock sphere…though this marks his first time working with JLT.  He was, however, an integral part of the original Blue Murder with John Sykes and Carmine, so Rated X very much suggests a coming together of old friends from the outset.  In old fashioned classic rock terms, it’s an impressive gathering, certainly.

Everyone here can be heard performing at somewhere near their best, too – Turner’s slightly ragged voice still brings plenty of volume when required. Franklin’s basslines are often overshadowed but almost always inflected with some very smart noodles for those who care to keep a keener ear, while the lesser known Cochrane proves himself worthy of a position in a band that could’ve included many world-famous six-stringer. Even Appice delivers. While he shares a history with Turner and some may rate him as a hard-working rock drummer, some of the projects with which he’s been a part during the naughties and beyond rarely show him at his best.  The first two albums from the rejuvenated King Kobra [‘King Kobra‘ and ‘King Kobra II‘] are faintly embarrassing; his blues project with Javier Vargas is nasty and Vanilla Fudge’s Led Zeppelin covers album from 2007 remains about as appealing as a maggot infested fruit bowl.  Rated X goes some distance towards making amends for any previous musical misdemeanours – his heavy drum sound reverberates through almost every song with a tasteful aggressiveness befitting of the much-missed Cozy Powell.

It’s Appice leading the charge during opener ‘Get Back My Crown’, a number that firmly sets out the band’s intentions.  With a rumble of drums, the band crash into a retro rocker that’s equal parts inspired by the raucousness of Deep Purple’s ‘Fire In The Basement’ and Yngwie Malmsteen’s ‘Riot In The Dungeon’ with a smidgeon of Rainbow’s ‘Lost In Hollywood’ chucked in for good measure.   Turner sounds incredibly comfortable belting out the big notes; even if they don’t come with a huge amount of finesse, there’s no denying his voice still carries reasonable amount of power.  Not content with lurking in the back, producer Alessandro Del Vecchio guests on keyboards and slaps at his Hammond in the manner of Don Airey throughout and his contributions are absolutely vital in lifting this from stodgy rocker to something in a more classic vein.  Also reaching for a similarly full-throttle experience, ‘On The Way To Paradise’ allows Cochrane to hammer out a late 70s styled riff – complete with a brilliantly fat tone, while underneath, the keys swirl and drone – the end results sounding not unlike the more melodic output from Malmsteen, if only he’d managed a second album with JLT…[1988’s ’Odyssey’ is far superior to anything else the Scandinavian shredder has ever released].  While Franklin’s bass work at first appears rather more sedate, there are moments when he rises from the rear – particularly so during the instrumental break where his nimble fingers can be heard attempting to upstage the guitar solo.

With an intro hinting at being a poor relation to Deep Purple’s ‘Highway Star’, ‘Peace of Mind’ appears to be one of the weaker numbers at first, but as the song finds its own feet there’s a decent rocker to be heard. Franklin’s pumping bass backs a punchy drum part, while Turner cuts loose on a fairly melodic vocal which taps into the more distinctive aspects of his tenures with Rainbow and Purple.  Linking the bombast and melody, a mid-section adds a little funk to proceedings, allowing Franklin the space to branch out with a fretless solo while Del Vecchio goes all-out in the keyboard depot.  Musically, it’s just bread and butter stuff for the musos involved, nothing too fancy, but they still sound as if they get a thrill when rocking out in this way.  The sense of camaraderie also comes across strongly on the album’s lead single ‘This Is Who I Am’ – a hard-riffed, swaggering number that shows off a great tone from Cochrane, whose guitar chops sound very comfortable when soloing against Appice’s hard snares.  Turner, meanwhile, rises to the occasion with a powerful vocal exploring his full range, before Cochrane brings everything to a close with a barrage of wah-wahed guitar.  A little less Rainbow than much of Rated X’s output, the cock-sure attitudes on show could perhaps be compared to Black Country Communion – but, make no mistake, Turner has the class (and the sense) to hold back where required, making this far more melodic than most BCC and Glenn Hughes’s full-scale squealing.  If you want a good idea of Rated X’s intentions within a handy soundbite, both this track and ‘Piece of Mind’ are good starting points.

With a riff that’s equal parts inspired by Ritchie Blackmore and ‘Eleventh Hour’-era Magnum, ‘Don’t Cry No More’ provides a decent showcase for a deep bassline while tapping into a classic rock sound.  With Turner in particular strong voice throughout, it’s a track that could’ve been recorded at any point during the previous three and a half decades.  As things settle into a distinctly Purple groove, the collision of organ and guitar brings a real sense of drive…and with the help of a strong hook, it quickly asserts itself as a standout. Following a suitably bombastic intro of heavy drums and moody riffs very much in keeping with half of this release, ‘Stranger In Us All’ swiftly showcases something with a touch more grandiosity.  Taking a more pompy approach, it’s a more vocally led piece, with Turner’s voice joining with a wandering bass on a relatively sparse verse before tackling a grand pre-chorus.  Although sounding like two distinctly different musical ideas cemented together, it finally explodes into a memorable chorus with a broader use of harmony vocals.  Things aren’t too shabby during its second half, either: Cochrane offers one of his most forthright solos, whilst – never one to be outdone – Franklin fills a few bars with a terrific fretless bass solo.

Those who like Joe Lynn Turner’s more AOR-tinged solo material are likely to enjoy ‘Maybe Tonight’, a number that’s more concerned with showing off the veteran singer’s tones than the band’s musical prowess.  It’s never as AOR driven as his own ‘Rescue You’ from the mid-eighties, but those who’ve enjoyed a bit of Sunstorm will soon find this number becoming a favourite.   Even better, he quasi ballad ‘Our Love Is Not Over’ channels some fine melodic rock with Turner in equally fine standing. Again, it’s more AOR sounding than the Purple-isms elsewhere, but this time the softer melodies are fleshed out with some superb playing from Cochrane taking a dirty blues tone for most of his lead, clearly influenced by Gary Moore’s work during the second half of the eighties.  His featured solo slips from the blues-edged into fast widdling, but it never feels forced in any way. There are plenty of strong numbers on this disc, but this one is essential listening.

The album may not break any new ground, but then it would be foolish to expect anything too different from the musicians involved.  As it is, it’s a release that’s free of filler and Rated X (as a whole unit) very much play to their strengths.  With results worthy of filing next to Deep Purple’s ‘Slaves and Masters’ and Malmsteen’s ‘Odyssey’, fans of this particular style – and Turner’s work, especially – will not be disappointed.