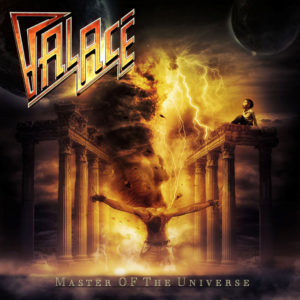 Michael Palace made his entrance into the melodic rock world early in 2016 when he contributed some fine guitar work to the second First Signal album. Several months on and with a new band in tow, his eponymous band’s debut teams him up with musicians who’ve played on other AOR projects from Find Me, Houston and even Erika Norberg.

“Heavily influenced by 80s imagery and sounds, Palace deliver arena rock like you’ve never heard before…” his blurb tells us rather proudly. Since everything about Palace’s music is decades old and a massive throwback to melodic rock’s glory days of 1988, surely that statement is an oxymoron? Of course we’ve heard it before…and we’ve lost count of how many times. It doesn’t change that what Palace do, they do exceptionally well, but in terms of originality, there’s nada… Although ‘Masters of the Universe’ sounds like several dozen other bands from 1985-89, however, there’s no denying that Palace’s love for AOR and melodic rock shines very brightly. Throughout this album, the song craft is about as good as you’ll hear from a post-80s band playing in such a shamelessly retro style, while the attention to detail within the musical arrangements is also very gratifying.

The band do nothing to hide their love of the eighties from the outset, with the title track presenting the very best of their style, opening up with a world of keyboards that sound like the theme to a Saturday night TV quiz show from the past, before finding its feet via very melodic, punchy rock. Palace’s guitars crank out a great riff from the schools of Survivor, Boulevard et al, while even shinier guitars compliment the main tune. Chorus wise, it’s a huge marriage of classic melodic rock and shameless pomp, where harmony vocals balance out a bombastic wail. Moving into the instrumental break, there are some pleasing guitar lines, but it’s all about those keys, with several bars are dominated by the kind of pomp that made the first Spys album so thrilling. In melodic rock terms, sure, it’s a sum of its influences, but none the worse for that.  An instant stand out, ‘Stranger’s Eyes’ combines the kind of huge harmony vocals as per the first Harem Scarem record with occasional west coast-ish Toto influenced rhythms. The keys range from the huge pompy type to classic stabs, while Palace himself is in place for a superb solo full of fret tapped goodness. His lead vocal has presence, too – maybe a little too much presence – but everything comes together in good form. Even better – and bordering on instant classic – ‘Part of Me’ could have fit among any of the tunes on the First Signal album with its constant nods to the earlier works of Harry Hess and the last gasps of melodic rock’s time in the spotlight. The chorus is huge, the arrangement brings out the very best in ringing guitars and sheer melodicism, meaning the end results sound like a mash up of Harem Scarem, Def Leppard and ‘In The Heart of The Young’ by Winger. If this is the general standard of Palace’s work, then their lack of originality is very much forgiven.

‘Man Behind The Gun’, meanwhile, opens with tinkling keys and retro sounding guitar work that screams mid 80s Saga, before switching to some solid melodic rock vibes that come straight from 1989. With a pumping bass and clean vocals, it’s all very familiar – in a good way – while the band’s Swedish origins colour the edges of a great tune. The verse is strong, the chorus stronger, coming across like a hybrid of Def Leppard, Europe and the more melodic edges of the much overlooked Warp Drive, big on harmonies (but not ridiculous), while the featured solo includes some great string bending, squeals and a great key change en route. For old style melodic thrills, this really hits the mark. ‘Matter In Hand’ drops the pace to a hefty Survivor-esque midpace, allowing for one of the album’s best vocals, featuring a melody that’s heavily indebted to late 80s Whitesnake with a touch of Scandinavian charm thrown in for good measure. If you think Snakes In Paradise were great at this kind of thing, there’s every chance this tune will blow you away. Sure, Michael and company have set the cheese factor dials firmly into the red, but this represents AOR and melodic rock the way you’ve always loved it.

‘Cool Running’ mixes up tech-based AOR keys with a touch of Magnum‘s ‘On A Storyteller’s Night’ pomp during a bloated intro, before unleashing a world of choppy rhythms and ringing guitar sounds that are so reminiscent of Icon’s classic ‘Night of The Crime’, before leaning towards ‘Drastic Measures’ era Kansas for yet another huge hook. In terms of musical thievery, it seems that Michael Palace is absolutely unashamed when borrowing an influence or ten, but – as before – there’s no mistaking that he takes the influences and recycles them so, so better than most. ‘She Said It’s Over’ begins well, featuring one of the album’s finest intros. Palace combines a solid guitar sound with pristine, bell-like keyboards – a recurrent melody that stands this tune in very good stead – before moving into a verse where the melodies are almost as strong, helped no end by a confident vocal. Somewhat predictably, the chorus comes with a full force; a muted guitar solo elsewhere fills a few bars with ease and without any unnecessary showing off. If there’s a drawback with this number, it’s perhaps that it’s just a little bit too overblown. By the time the last chorus hits, it all feels a bit too bombastic if approached in the wrong mood…but if the mood fits, there’s every chance you’ll love this too.

With so many superb tracks, surely a couple are bound to come across as second division material by default? Nope! Unusually, it seems not to be the case with Palace. Filling the rest of a brilliant release, the remaining tracks feel just as much like a loving journey through melodic rock’s past glories…every one a reminder why we all love this when done well and done right. ‘No Exit’ has more keyboards than a Giuffria record but uses them in a way that evokes an 80s action movie soundtrack alongside a simple, infectious hook that would have suited Takara; ‘Young, Wild, Free’ hits home with some feel-good summer vibes, with an Aviator styled charm – all driving riffs and David Bryan-esque keys – while ‘Path To Light’ sounds like Harem Scarem with Ken Tamplin’s lyrical love for a higher power (with more killer harmonies than you can shake a stick at) and ‘Rules of the Game’ comes closest to power ballad territory, presenting a Whitesnake mid pace and overwrought sense of loss. Musically, it’s great – Palace proving yet again that Mike knows how to solo with a great melodic flair – and vocally, if possible, it makes parts of ‘She Said It’s Over’ sound thin on the ground. If you’re going for big, then this is how to do it.

It often sounds as if it should be easy to revisit melodic rock’s past and crank out tunes working to a familiar blueprint, but the hundreds of substandard bands who’ve had releases out on Frontiers Records and similar labels since the 1990s surely proves otherwise. Palace get it right at almost every turn. Owing far more to the past and playing even closer to traditions than many of their label mates, the band scores nul points for originality, but fans of the style will absolutely love this album. It’s eleven tracks yield choruses that are huge and catchy, the production values are solid and the arrangements, though traditional, have everything you loved about AOR three decades earlier. In fact, ‘Masters of the Universe’ is not just the best AOR/melodic rock album of 2016, it is also a contender for one of the best of the previous decade…it’s definitely the best since Wigelius released their debut in 2012. If you’re a melodic rock fan, do not hesitate in putting your hand in your pocket – this one’s an essential purchase!