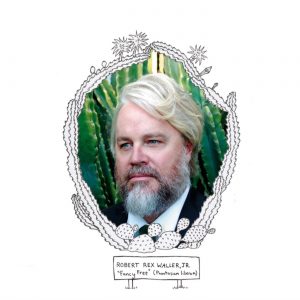 Reason enough to take this for a spin, the Mike Stinson composition ‘Counting My Lucky Stars’ is musical perfection from an old-ish country persepective; it’s musical arrangement finds a space somewhere between a Gram Parsons melody and Mark Olson’s never ending sense of revisionism. Waller’s chosen band are superb – smooth and slick, but never syrupy, as the strummed guitars and plinking keyboards lay the foundations of a great tune, underscored by subtle drums. The instrumental section midway is more impressive in the way it fuses an old musical heart with spacy moods befitting of a Howe Gelb experiment. It’s Waller who leaves the most indelible impression, of course, his big voice wandering easily through every line, with a tone somewhere between an unsung alt-country hero and wisened hat wearing 70s country star. In an even older style, Utah Phillips’s ‘Walking Through Your Town In The Snow’ gets a fairly faithful redressing, yet at the same time features enough of Waller’s own vision to make it worth hearing. The more bluegrass elements of the original are smoothed over, the tune slowed, but the standard country backdrop remains. Waller’s voice, warm but a tiny bit wobbly, recounts the scenes of empty streets and closed bars with the sort of presence of narrative that would gain Johnny Cash’s approval. It’s a slow and old-fashioned workout, but the performers’ love for the song is more than obvious.

Moving into the more contemporary, a largely unheralded Neil Young number ‘Albuquerque’ (originally from 1975’s ‘Tonight’s The Night’) sounds great. Young’s take – somewhere between the more electric moments of ‘Harvest’ and the bones of ‘Down By The River’, is one of those slow-burning tunes that only true fans seem to connect with; Waller’s chosen approach is respectful, but in some ways very different. The country rock back bone is intact, but the arrangement is much bigger. The guitars are amped, the keyboards adding more of that kind of spacey vibe as heard on ‘Lucky Stars’, which means in places it almost has as much in common with ‘Nights In White Satin’ as the tune actually in hand. Waller’s deeper voice appears unsure of the material at first but settles midway, but the real gem in this reworking comes from the solo – no longer the angular guitar sounds as favoured by the song’s writer, but a distorted accordion whipping up an alt-country storm. As far as covers go, this one takes a few spins to grab hold, but when it does…it’s so obvious why Waller wanted to give it an overhaul. From more out of left field, The Doors’ croon-fest ‘Crystal Ship’ is a perfect fit for Waller’s voice, but knowing this, he’s decided to totally retool the music so that it’s only the vocal melody that remains from the original. Trip-hop drums, blankets of off-key keyboards and a hard strummed guitar come together in fine style but, chances are, it’s the overtly loud organ – almost carny-baiting – that becomes the most distinctive. As far as covers go, this is absolutely bonkers. Always a revered lyricist, Bob Dylan is represented by a stately rendition of ‘She Belongs To Me’, marking it’s place on the album as an essential homage while sounding like a deep, forgotten Jayhawks cut, eventually reaching a NY-esque guitar crascendo that’s more like Young than anything on ‘Albuquerque’, while Daniel Johnston’s ‘Don’t Let Your Sun Go Down On Your Grievances’ really cooks with a full band arrangement, some Nanci Griffith-esque backing vocals and a jaunty electric piano solo. Each of these selections shows off Waller’s gift for arranging other peoples’ material for his own advantage excellently.

The rest of the album doesn’t quite have the same gravitas, although there are a few interesting ideas among the lesser tracks. The sparse jazz of ‘Night Owl’ is home to some great upright bass work and a few plinking guitars; with the vocal out front and centre, Waller has very little to hide behind but seems comfortable enough. The results are unexpected, in that they would sit more easily alongside some of Elvis Costello’s crooning affairs or an Eleni Mandell LP than most of the material on this album. The old Hollies chestnut ‘The Air I Breathe’ (covered by everyone), meanwhile, is a bit flat. The melody is still one of pop’s finest, but Waller’s decision to drench the arrangement in shiny eighties keyboards and many filters is an odd move, thus diminishing what could have been another great retelling. If you didn’t know better, you’d think this was recorded in 1989. On the plus side, though, the drum sound is nice and clear and the presence of peeling bells comes as a surprise, adding a little kitchen sink grandiosity. ‘Waterloo Sunset’, on the other hand, is horrible. Naturally, it’d be hard to beat the Kinks’ version and it would take a foolhardy soul to attempt to do so, but one of pop’s most enduring story songs deserved so much better than a man clanking on a piano. Not much better than a hasty studio run through, it really is this album’s low point. Best advice: just program this track out and reprise ‘The Crystal Ship’.

Although the rest of ‘Fancy Free’ is fleshed out with a touch more country (including that aforementioned title cut), playing the record from end to end, it feels like a genuinely mixed bag. Waller’s deep-ish voice occasionally sounds unsettling on some of the material – especially when you’re so used to a voice like Neil Young’s for example – and is occasionally a total mismatch (hey ‘Waterloo Sunset’, we’re looking at you), but when it works, it works. Waller so often at his best when settling into an easy country style, but the cool freakout presented on ‘The Crystal Ship’ suggests he’s a man keen to challenge pre-conceived ideas about what he does. These songs are unlikely to replace the originals in your affections, but the best efforts will certainly make a welcome change on a couple of well-loved favourites.