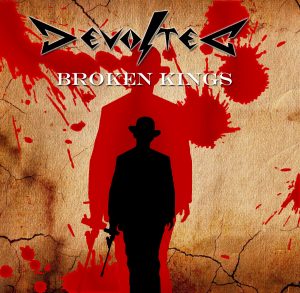 A thunderous drum part and the kind of circular guitar part beloved by Zakk Wylde both promise great things during the intro of ‘My Monster’, showing the band understands the importance of making an impressive entrance. Exploding into seriously crunchy metal from then on, the main riff is slightly more alternative but hugely meaty, while a naturalistic vocal stance leans towards the shouty and a full-on drum sound provides plenty of thrust via double bass pedals. Such a huge set up deserves a huge chorus and although a few harmony vocals steer things towards the more melodic in a very important way, hook-wise, this never really sinks in. Still, looking at this track from a purely musical perspective, it’s clear that Devolted have some serious chops. With a deep voiced shout from the back of the studio – a voice that sounds a little like Phil Anselmo – ‘Dogs of War’ starts out very confrontationally, and in terms of heaviness really doesn’t disappoint. It has a filthy Pantera-esque edge, full of downtuned string-bent heaviness, but surprisingly, the track doesn’t actually rely upon that as much as expected. A second riff with a slight pneumatic edge and with a leaning towards alternative metal quickly takes over and gives things a huge kick in the arse during the verse, where the vocal straddles a fine line between gruff metal voice and hardcore shouting. As before, a few harmonies give the pre-chorus part some colour and there’s potentially so much to like, but the arrangement is far superior to the lyrical content. If anything leaves the strongest impression, it’s the combination of enormous guitar riff and almost machine-sharp drumming, which results in a tune with plenty of clout; it’s a pity there wasn’t a better song.

After a tough opening pairing, things take a dip with ‘Gods of Light’. There are some great elements to be heard during this number, but the whole is weaker than the sum of its parts. The main riff on the verse recycles familiar groove metal in a very impressive manner, but has nothing to follow. The accompanying vocal doesn’t always sit comfortably, leaning too far towards the shouty (once again), while, moving into the chorus, there are two musical ideas competing for attention: the first is a pounding, slightly atonal and repetitive riff that’s topped by more shouting; the second, a more circular riff, has a great tone but less of a melody than the band have previously proved capable. If anything can be gleaned from this at all, though, it’s that Dominik Tokarski is a great drummer, with the ability to deliver huge sounds throughout, with a deftness for tackling whichever metal-based grooves are necessary…and all with relative ease. Finishing with the title track and saving the best for last, Devolted first tease with an intro that includes a nod to the old-school in the guitar tone, but once that’s faded all the way in, they fill most of the next four and a half minutes with some really, really punchy metal. The riffs have a chugging, slight hardcore edge, occasionally dropping into a couple of fills that borrow from the more traditional, summing up the band’s broad view of metal. Vocally, Rafal Smyczynsky is gruff but his sense of attitude is cool, unwavering, while some gang vocals really beef up the chorus, but that’s still often playing second fiddle to a great riff. As if all of the previous musical outings have now matured – the band aren’t shy in throwing in a couple of the older styled ideas that brought them together and during the track’s second half, the crushing metal sounds are tempered by a very 80s guitar solo and some twin lead work to bring everything to a melodic close.

While these four tunes do not necessarily suggest Devolted are necessarily able to take metal into uncharted territory, most of the material is exceptionally well played and the band should also be congratulated for never wearing their influences quite as boldly as so many. While they seem to have things sorted musically, of course, some better choruses certainly wouldn’t have gone amiss – you can never have too much of a hook after all.