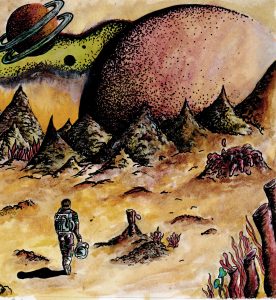 A band previously described as having “vim and verve”, Herfordshire’s The Lunar Effect play a brand of stoner and desert rock that so often has a definite American sound. Taking bits of Kyuss, Trouble, Sun Voyager and the obligatory seasoning of Sabbath, their work is riff heavy, but often tempered by a welcome spaciousness giving proceedings a slightly trippy nature. Following their 2014 home recorded EP, for 2016’s ‘Strange Lands’, Jon Jefford (vox/g) and Daniel Jefford (d) now find themselves as part of a full band and with a slightly bigger recording budget. This gives their first full length release more scope than they ever had before.

‘A Ballad for the Tin Man’ works its magic very slowly, beginning the release with some really low-key vibes. The sounds of astronaut samples and a gentle circular piano riff provide a great intro, not really letting the listener guess what’ll happen next. With the arrival of a super fuzzed out guitar, some great rock takes hold, showing that newly hired guitarist Jim Harris knows his way around a classic, simple riff, while the bass adds extra groove. Thanks to that guitar tone, comparisons to ‘Red Sun’ era Kyuss and Slo Burn are abound, but the addition of a light vocal – in a much higher register than most would expect – sets The Lunar Effect on a slightly different path. The contrast of styles doesn’t seem to work at first (largely due to Jon J’s untrained and slightly wobbly voice) but the riffs ensure there’s still much to like. ‘Jack & Jill’ sweeps aside the hazy mood in favour of some bigger stomping rock vibes, working the twin guitar line up even further. From the outset, the heavier elements are tempered by an unsubtle bluesy tone, while a hugely treated vocal featuring harmony voices automatically presents an improvement on the first track. The sweeping tones of lead guitar over the main groove once again show Harris to be firmly in the driving set, before a mid-section stokes up the stoner blues, eventually tapping into a lively workout straight from the ‘Sabbath Bloody Sabbath’ book of whacked out greatness. By the end of this number, the riffs have become so impressive and The Lunar Effect’s mix of Sabbath and Sun Voyager so appealing, the iffy vocal on the opener can so easily be forgiven.

Slowing down and taking most of its cues from 1972, ‘Into the Ether’ combines an even heavier riff with subtle muted chords and some bluesy lead. The quieter moments allow drummer Daniel to take centre stage with a measured beat, while a retro “singing down a telephone” effect on the vocal makes Jon sound as if he’s calling in a report from a lunar voyage. The light and shade here is more pronounced than before, suggesting the psychedelic elements behind the rock could play a bigger part in further musical endeavours, but ultimately it’s the mighty head nodder of a riff that keeps things moving. In terms of bringing everyone together, the intro to ‘So Far Gone’ proves a high point of the album, presenting a musical hybrid of Fu Manchu stoner wonderment and the kind of tune that could just as easily morph into a British glam rocker from the seventies. As the number progresses, it slowly unfolds to reveal a few melodic guitar lines and a reasonable chorus hook, but the unrelenting stomp retains its place as the track’s most memorable element, with Daniel’s weighty toms powering so much of the groove. In terms of well rounded performance, this is the album’s highlight…first time listeners might want to make their first port of call here…

The final pairing of ‘Molecular Curiosity’ and ‘Sail For The Moon’ dig a little deeper into Lunar Effect’s bag of tricks. ‘Molecular Curiosity’ retains a great guitar tone throughout, though it often suggests volume and anger over subtlety, while the bass finally pushes Mark Fuller from the shadows, showing off a retro style that favours even more weight over flash. Between these and a thumping drum line there’s power aplenty, while more heavily treated voices deliver a lyric that seems surplus to some excellent music, before the epic closer ‘Sail For The Moon’ adds something more cerebral to the album. Reinstating some clearly defined keyboard work not heard since the album’s beginning, this tune already marks its place as something different as a steady beat, hard piano chords and a blues based sound provide the bulk of the music. Slowly progressing into an other worldly psych-blues jam, the natural talents of Lunar Effect shine through, until the twin guitars drive everything towards a more typical heavy direction. The overall tone here allows this to become one of the album’s most appealing melodies, strong enough to sustain the remainder of the track and strong enough to – again – perhaps forgive a weaker vocal performance.

The feelings conjured when hearing this for the first time suggests they’re the UK’s answer to the overlooked Butchers of Sky Valley. The vocal may sometimes be a sticking point, but the stoner vibes and riffs throughout suggests The Lunar Effect are a band with strong musical presence and an even stronger conviction in their art. Despite the flaws, for lovers of an old style and heavy vibes, these ‘Strange Lands’ are worth exploring.