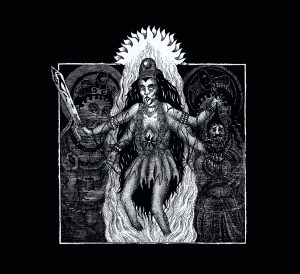 Sharing a label with Harrow, Darkspace and Krasseville, it was always obvious that Drought’s debut album wouldn’t be an easy listen. Quickly gaining positive notices from cult music blogs situated in the deepest corners of the internet, ‘Rudra Bhakti’ set itself a place among lovers of extreme music, while simultaneously presenting something that barely represents music at all. There’s extreme and there’s extreme, and Drought piledrive noise across twenty four brutal minutes, leaving behind something that borders on the unlistenable, almost to the point of representing some kind of bizarre aural self-harm.

‘Entering The Gate of the Raging Sun’ begins with drones and ringing bells – as if summoning evil. Gradually becoming louder and louder, the main noises intensify and become more frequent; the bottom end grumbles like there’s an earthquake looming and harsh electronic sounds eventually cut through. Having created a very effective intro, most bands would consider this a job well done after a minute or so, but that’s just not enough for Drought who set about stretching this out for the better part of five minutes, by which time, most listeners will already feel tested. With no pause, this bleeds into ‘Urdval Kundali Arise’, an absolutely unrelenting barrage of noise blending death and black metal traits with a bass heavy grindcore aesthetic. A few bars of this proves incredibly wearing – an absolute drain on the senses – until things slow down and reveal what appears to be a great, hefty chug between the drums and guitars. Managing what feels like two bars of this, Drought fear wimping out and so revert back to the pneumatic noise. They pummel away gleefully for the bulk of the next two minutes, eventually arriving at a slow and grinding sound that mixes doom and black metal. Over this, their frontman screams some kind of incantation, doing his best to scare away any listeners who may still remain. With a last burst of grindcore ugliness, they’re done…and we can possibly assume Kundali has arisen. It’s only with the arrival of track three that Drought feel the need to experiment with anything like a tune or melody. The first part of ‘Reveal The Unlight’ takes an unexpected turn for a fusion of black metal and gothic undercurrents, as harsh guitar riffs are played slower for a forceful sound. When everything comes together with a cold vocal, it’s like experiencing a black metal band teasing with the mechanics of Alien Sex Fiend and UK Decay. Having now found a sound that’s both confrontational and sort of almost accessible, you might be able to suggest that Drought are forging new territory. Sadly, this all too quickly leads to a confrontational, pummelling aural assault that feels too much like an empty rehash of most of the previous track.

Taking the empty quality of the intro and overlaying a clean guitar, the intro to ‘Transfiguration of the Warrior’ finally brings something genuinely welcome as stark melodies and tribal drums come together in a marriage of something deeply unsettling. Naturally, things are about to get heavy and various distorted guitars – possibly multi-tracked – come to aid with one of the heaviest riffs ever. Are Drought about to deliver some top class doom and somehow make this all worthwhile? Sadly not – at least for now – and their preferred extreme black metal takes over for various strands of unholy noise that quickly becomes a dull, pneumatic din. For those who might still be interested, the album’s best moments come during this track’s second half where a slow doom riff appears to get heavier and slower over time; it’s slower presence finally teases with something more interesting, but it really isn’t enough to counteract all the horrible output up to this point. Factor in various reprisals of the demonic sounds from the opener, this eventually becomes the album’s best track. It’s still too obtuse by half and the doomier elements don’t quite carry the conviction held by other bands, but it at least shows an interest in noisy structures somewhere beyond the merely pneumatic. Too little, too late? Maybe.

With this album, Drought raise the bar of the extreme…leaving behind a veritable drought of tunes. This is just a slab of noise that, for the most part, seems devoid of anything really interesting. Supposedly, it’s been a concept piece tracing the journey from merely human to superhuman, but with barely any actual music to latch onto – let alone any audible lyrical concerns – would anyone know that if the band hadn’t told them beforehand? It’s unlikely.