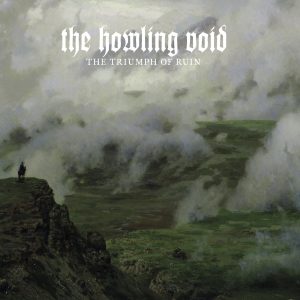 A somewhat dark journey begins with the aptly named ‘Lords of Barren Fields’, a tune not only with a heavy bombast, but also a bleak and barren outlook. A chunky chord progression and slow drumming make a sharp entrance, which then overlaid with a shrill guitar perhaps suggests battle metal, but once the scene is set, a few of the heavier parts disperse to reveal a lovely, mellow gothic texture. The guitars continue along a similar path, though much softer, as a bass adds a cool bottom end and the quiet, unsettling demeanour is joined by a mumbling vocal. In many ways, the vocals aren’t that important – more of a colourant than a driving force – but added together, everything is almost perfect. Upon returning to the heavy and slow groove and occasionally pepping it with a couple of instrumental traits leaning towards a black metal influence, there’s a feeling of this being a very complete piece. With a guitar tone that borrows from melodic black metal, ‘The Looming Darkness’ has a much edgier tone, dominated by riffs, before revealing even sounds born of a gothic, cold nature. While nothing rises beyond a mid-pace, the feeling of fullness more than holds interest, while another quiet vocal fills spaces almost inaudibly. Although clearly very good, at first, it doesn’t feel as special as anything from ‘Runa’… but once a keyboard approximating the sounds of haunting violin takes centre stage, a great atmosphere is captured. By the time the track’s third movement presents itself with a slow, doom laden riff and voice that owes more to Fields of the Nephilim than Cradle of Filth, it sounds even better. With the riff repeating over and over, it almost becomes as stark as a drone rock noise and by the time it’s all over, this number has earned a place among the album’s standouts. Chances are, you didn’t even realise it until the very end.

Adopting a very soundtrack styled feel, ‘The Nine Worlds Wept’ invites the listener into the quieter corners of the Howling Void’s ouvre at first, presenting a repetitive piano motif and string sounds, before a solid, slow – and equally repetitive – guitar chord chimes across everything. More string sounds emerge to ensure the music – by this point, sounding like a score for a bleak Scandinavian drama – never loses sight of its original root, and the musical cycle begins again. Repeating this rather simple melody for over six and a half minutes, you’d suspect it would become empty or even boring, but it really doesn’t. Closing with a slightly bluesy lead sound over the original piano, this is very thoughtful indeed; deeper emotionally than anything ‘Runa’ offered… Simply gorgeous. The slow grinding of ‘Fenrir’, meanwhile, moves back towards the battle metal sphere and is the closest this release comes to repeating ‘Runa’s best moments, but even then, the quieter sections bring a very different slant due to the presence of a vocal. There are times when that sad, unsettled voice almost drifts into the bigger musical backdrop, but then shies away; but this only reinforces The Howling Void’s preference for atmospheres over metallic blast. A ringing lead guitar does it’s best to add a melody over the slow riff, but by the midpoint, the riff becomes all. In short, if you loved anything from ‘Runa’, this could become a favourite.

Tapping into more of a funereal style, ‘Where Once a River Flowed’ presents one of the album’s biggest riffs and then follows that with one of its slowest. The presence of gothic drones, a tolling bell and vocals that almost feel Gregorian take “R”’s darkest visions to a place that’s surprisingly sophisticated, before a soaring sound cuts through the driving riffs with a sonic coldness. Musically different to the rest of the release, these eight minutes are guaranteed to have a much broader appeal for the more metal-oriented listener. Although the most epic track, the repetitious nature could make it the most slight, but the crawling darkness emanating from the speakers represents some very, very fine doom indeed, before ‘Silence After The Storm’ finishes everything with a quiet, gothic ballad, where a wobbly vocal set against a simple guitar part and typical keyboard sounds recalls parts of ‘Looming Darkness’, suggesting that although not a concept album, many aspects of ‘The Triumph of Ruin’ are almost conceptual. It’s only with the introduction of a second guitar near the end that this last track even feels as if it’s going anywhere…it’s all very introverted…and after everything that’s gone before, this closing statement feels a little lacking on almost all fronts. A bit of a downbeat end, maybe, but nothing’s perfect of course…

Any fears that ‘The Triumph of Ruin’ would be disappointing can be cast aside. However, it isn’t necessarily better than ‘Runa‘ – it’s just different. The shift away from doom means that most of the album couldn’t even be considered a genuine retread. The quieter aspects create music that affords a much broader palate, but the commitment to an all-round bleakness remains constant. There’s so much to love here…but it often only exposes itself in time. Play it loudly and alone for best results.