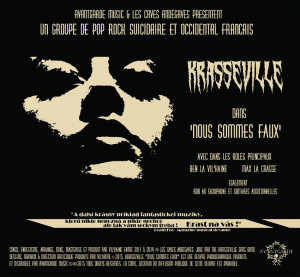 Opening to the strains of a church organ, the album begins with a quasi-gothic darkness, before voices echo and sound as if they’re recounting a children’s rhyme. Then, the fun begins: ‘Nihil Time Funeral Process’ really shows what Krasseville can do. A pumping bassline, twanging guitars from a noir-western soundtrack and the sounds of gypsy folk accordion do their bidding against a measured drum part. After a couple of minutes of this, it’s already so clearly a love/hate affair, but if you can dig it, there are many layers to enjoy. Add to this a squirly and almost new-wavish keyboard solo and a deep croaking voice that sounds like a man engulfed by low-budget horror movie fog and there’s no denying it’s got a sense of grandeur, despite the relatively small budget. It’s too short by half, but the quirky instrumental ‘De Sangre Y Mugre’ is even better and makes a much bigger feature of the guitar which teased during the previous track, chugging sharp chords and multi-layered twang. It’s busy, closer to a folk jig than anything, but some of the sharp edges and discordant keyboards make this feel like a head on collision between Old House Playground and an early Stranglers instrumental break. If by this point you don’t feel any connection with Krasseville’s soundscapes, rest assured that the rest of the record really won’t do it for you either.

Although ‘Love Sucks & Hurts’ suggests vampirism, the ensuing instrumental isn’t especially gothy. Playing their cards very much to surprise, this number brings three and a half minutes worth of keyboard patches and droning, rolling in a fashion that seems strangely nautical in the way the mood drifts. It’s like hearing a working home demo by Hans Zimmer, while the subsquent ‘Tete Creuse’ hints at epic adventure. Once again, the keyboard sounds are a little on the unfinished side, but increased use of rattling percussion and atmospheric guitar help this to sound a touch more complete. As before, the guitars drop in and out with reverbed chords as if scoring an apocalyptic western, whie the interplay with the drums really lends a sense of pace. Following sparse chords played over radio samples (which are probably all important to the plot, though in French), the title track shows Krasseville at their most accessible. Warmer than most of their material, this number borrows heavily from early 80s goth – most notably Bauhaus and the quieter Bad Seeds – and reworks the spoils into a jaunty sounding indie-rocker, given extra power by an angry French vocal. In a sharp twist, ‘De Sangre Y Mugre’ is then quickly reprised with the addition of more radio samples and a soprano saxophone that, firstly, sounds like it’s been strongly influenced by David Bowie‘s ‘Sweet Thing’ from 1974 and, secondly, really shouldn’t have a place within this album. And yet it’s here, and what’s more, it pierces through everything in a manner that strongly suggests all previous music has been building up to this. That’s true enough, too: the last two pieces of music sound very much like an afterthought, like appendages nobody wanted to throw out. ‘Intro de la Fin’ is exactly that and has nothing more than extra dialogue, while the dark ‘KGB’ presents solo guitar, again drenched in reverb, given the most basic of mixes, eventually resulting in something that conjures up images of a trench-coated man standing in an alleyway awaiting his next orders.

With that, Krasseville leave us hanging. Reaching the end of this album, everything feels unresolved. It’s good while it lasts, but there’s no satisfactory closure. Looking at what’s present, of course, it can very enjoyable – surprisingly so, in fact. It’s not every day listening, it’s not uplifting, nor the kind of thing you’d keep on your portable digital players to help journey times seem more fleeting. That’s not to say there isn’t stuff here that’s worth checking out – ‘Nous Somme Faux’ is an interesting curio to say the least.