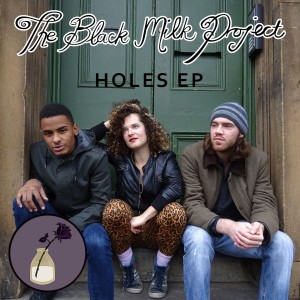 The home of steel, Def Leppard, Cockers Joe & Jarvis (unrelated), Arctic Monkeys and the backdrop for Threads – arguably the most frightening film ever – Sheffield isn’t always a city we necessarily associate with easiness, funk or jazz, but from within the city’s smog comes The Black Milk Project, an unlikely named trio whose debut EP shows the kind of comfort and self-confidence within their chosen musical niche, you’d think they were spawned from somewhere more cosmopolitan…and possibly twenty-something years earlier. Their sounds, dominated by a flowing quality that’s sometimes a throwback to early 90s acid jazz, always have flair, but also a crispness that really helps such easy tones not drift too far towards the easy listening.

The clean and natural tones of Kris McAdam’s lead guitar open ‘In The Garden’ in a manner that exudes cool. The addition slow rhythmic chords and a steady drum beat rounds out the sound in a way that gives the feeling of things gradually expanding, but it’s the arrival of vocalist Delia Taffler that’s make or break for the track. Thankfully, she’s more than aware of the atmosphere that’s been built up – albeit rather succinctly – and offers a performance that’s smooth and almost timeless in its soulfulness. Her delivery is full, yet restrained; her voice holding on to a slightly jazzy curl that appeals but doesn’t distract. The whole picture falls somewhere between a softer Sharks Took The Rest track and the overlooked, heartfelt performances of the sadly departed Shelby Starner. With drummer Danton Laramani content to hold it all together with an almost trip-hop like steadiness, it works nicely as an opener…and by the time an understated lead guitar fills a couple of bars with something even more simple, it’s clear they’ve done their best with everything, knowing that making things busier probably wouldn’t have improved anything, even if it might have grabbed the listeners’ attention more forcefully.

Driven by an almost swinging rhythm at first, ‘Let Me In’ is warmer, more groove-led and shows an affinity with retro acid jazz. This is intercut with synthy passages that borrow more from an alt-pop influence, but the marriage of the two styles results in a track that’s fully realised. Again, McAdam’s understated guitar work is pretty much flawless, but this time around, he seems happier to let the vocal take the lead, melodically speaking. On this track, Delia’s natural style is far more obvious; with a smooth backdrop, she’s in her element belting out soul-edged melodies with ease, but even so, a few listens uncovers a tendency to wander into the quirky, where – rather surprisingly – she almost sounds like Echobelly’s Sonya Madan in full-on croon. Possibly not deliberately, of course… Saving the trippiest for last, ‘Wasting Time’ starts gently with a phased guitar, a slow chord progression and a strong feeling that the resultant tune will wash over the listener. McAdam’s lead guitar has a fabulous tone once more, and once the drums make an entrance, with something to work against, his playing gets even better, throwing himself head first into a groove heavily reliant on heavy wah-wah for a full 70s feel. Dropping that against a very jazzy drum line, things are tight from here on and Delia’s voice steps up to the challenge. Her tones occasionally adopt a huge curl to suit, but this is great funky pop in the main, given a more adult feel by a nod to jazz throughout.

These three tracks show a total professionalism and a knack for easy songcraft that results in an EP that’s surprisingly enjoyable. The feeling that less is more allows the listener to bend an ear to some of the more subtle layers and embellishments within the songs, but above all, it’s the hooks and melodies that count and Black Milk aren’t shy of those. File under: a retro, late night listen.