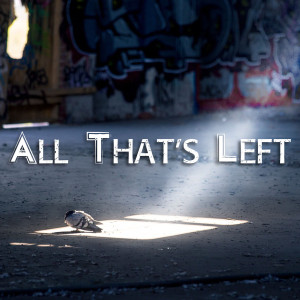 From Ontario, All That’s Left are a five piece rock band who clearly carry within them a restless spirit. The three songs on their debut EP present the work of a very talented band, while simultaneously sounding like a bunch of guys whom haven’t quite found their niche. That said, all three songs are enjoyable if listened to in isolation – they just don’t necessarily belong together.

Lead track ‘Falls On Me’ opens with a wonderful melodious piano line that suggests All That’s Left are a piano rock band, and then they smack you firmly in the chops with a heavy and grungy riff. The piano disappears and Ben Saunders’s electric guitar firmly takes over, bringing with it a solid, thick sound embellished by a retro wah-wah. With the arrival of the verse, everything falls away leaving clean acoustic and electric guitars and soft emotive voice. The heavier elements kick back in for the chorus – and the contrast between the aggressive and more melancholic makes for a particularly complete listening experience. Frontman Michael Tobin shows off a reasonably impressive vocal range, the quieter side just a little wavering but soon rising to deliver a decent post-grunge belt. There are a couple of really interesting musical embellishments farther on, with a quiet interlude introducing a few soaring guitar sounds (of which similar traits will make a greater statement on the next track) and a funky bass interlude showing that Mr. Dayne Gerous is probably capable of far more complex performances than have been called upon here. The piano makes a return appearance during the second verse, but after that intro, it doesn’t seem to fully live up to its initial promise. Even so, with the band firmly hitting their stride, this is an impressive opener.

Blending the smoother elements of ‘Falls On Me’ with a hard electric rhythm (that’s hard as opposed to loud, for this is a much more sedate affair) ‘Closing In’, lets the band’s gentler side cut through. Bringing very clear sense of retro style, the lead vocal is melodic and recalls the tones of Glen Phillips, along with various other elements that very much hark back to the 90s. The arrangement is the EP’s most instantly accessible, with the combination of great finger-picked rhythm and a gently soaring lead guitar really helping to make the track appear fully formed. Perhaps All That’s Left knows there’s enough here already and it’s better not to overdo things – in the space where most would have featured a lead guitar solo, there’s a minute or so’s worth of atmospheric noodling. A strident chorus rhythm and great all-round hook tops everything nicely, but it’s the combination of voice and quirky guitar that really catches the ear. ‘Closing In’ is worth four minutes of your precious listening time, especially if you enjoy the louder end of Toad The Wet Sprocket’s sounds.

Those songs give a fairly rounded picture of the band’s talents; both different enough from each other to show a musical range, yet just about close enough in spirit to have a common link, even if it’s often only Tobin’s confident vocal style. …And then comes ‘Love Punk’ – approximately two minutes and fifty seconds’ worth of manic, overdriven guitar thrashing, distorted vocals and pure energy…and not so much else. Like ‘Caged Rat’ in the middle of Soul Asylum’s classic album ‘Let Your Dim Light Shine’ (a throwback to the band’s harsher beginnings), this jars somewhat. However, whereas the Soul Asylum track came across as quirky and still bought an occasional melody, this is just utterly uncompromising. Although there have been heavy moments elsewhere, this sits rather uncomfortably alongside the other tunes and by placing it at the end of the EP, All That’s Left truly leave the listener hanging…wondering what they were thinking and what they would have served up next, if only there was just one more song. Just one more. It’s okay for what it is – assuming you like a bit of shouty punk – but to say that it represents a baffling musical turn is an understatement of colossal proportions.

The punky track is probably meant as throwaway fun, but the other songs introduce a band that really knows how to work strong, retro alt-rock melodies. While the influences are all over the show, with the promise that often comes through, ‘All That’s Left’ – both band and EP – represent a very worthwhile listen.
September 2015