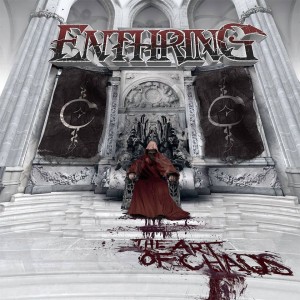 elease from Finnish black metallers Enthring is an interesting affair. Sometimes more symphonic than flat-out grindy, the multi-layered aspect of their music is strongly evident from the very first notes and although comprising just three tracks, it gives a broad enough glimpse into their craft without becoming overbearing. Provided, that is, you’re not averse to the occasional bit of extreme metal, in which case, this just won’t be for you.

The title cut firmly sets out their musical stall in a hugely bombastic manner, as the drums thunder in a very hard rock style before being swiftly joined by a guitar riff that’s also very much of the old-school. The lightning fast notes draw influence from Death’s Ralph Santolla in the way they attack, but as soon as the riffs take hold and those drums quicken pace, they’re instantly offset by a symphonic keyboard line that gains equal pegging in the mix, washing over everything with the sounds of strings. Not only that, but there are also samples of choirs, lending a gothic atmosphere that’s very much welcome. These melodic factors are then sidelined by the lead vocal, a somewhat predictable gravelly throat wrencher, occasionally spat with a scattergun delivery and almost punk-like intensity. On the slower passages, things revert to a more standard black metal growl, of course, but musically, things remain varied throughout. The lead guitar break, in particular, is one of the high points, placing the shredding sounds high in the mix with an approach that blends that Ralph Santolla-esque speed with [ex-Megadeth man] Chris Poland’s sense of melodicism.

Initially, with Matti Aurkallio going for the fully pneumatic approach behind the drum kit, ‘And We Dream of Our Demise’ sounds as if it’s going to be too intense, but between those moments, it’s another number home to some very interesting quirks. Tommi Kangaskortet shouts like a man possessed once more, but beneath the general ferocity, the guitars and keyboards launch headlong into something best described as a folk-metal jig; a strident tune with a rather cheeky quality that really helps carry the heaviest moments. Again, the featured solo is top draw, with Petri Salmera indulging in some speedy arpeggios, really flying the flag for the band’s more accessible qualities. Best of all, ‘The Second Vengeance Orchestra’ drops most of the black metal touches at first, allowing us to experience Enthring as they play some decent thrash. Choppy guitars, sharp rhythms and a deep vocal recall elements of ‘Ashes of the Wake’ era Lamb of God – a musical theme they return to sporadically – while elsewhere it’s business as usual, with the keyboards pounding out sounds of dark orchestras, darker choirs and the mood of low-budget horror soundtracks under pneumatic rhythms. The alternating between the classic thrash sounds and melodic black metal shows the full range of the band’s skills in very tight manner; there’s no padding, no extended instrumental faff, just a well structured and intense foray into extreme metal – played by a band with no weak links.

This EP represents thirteen minutes of very well played and thoughtful music for the style. Enthring make some attempts at giving their music a fairly panoramic approach with the extensive use of keyboards and samples, but the vocal style will always be a stumbling block for some. If, however, you have more than a passing interest in symphonic and death/black metal styles – ideally a fusion of both – ‘The Art of Chaos’ might just impress. It certainly won’t be precious listening time wasted.