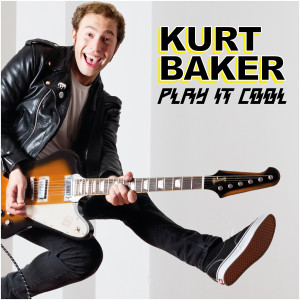 Kurt Baker’s first full length release ‘Brand New Beat’ was an instant power pop classic.  Despite all of the tunes being appropriated from the catalogues of Joe Jackson, Nick Lowe and The Cars,  Baker’s abilities for penning a great chorus along with his insistence on bringing a party spirit ensured his enthusiasm and talents shone through almost every moment of every track.  A companion disc comprising ten session leftovers – ‘Brand New B-Sides’ – was worth the price of admission for his take on Nick Lowe’s ‘So It Goes’ and an ode to actress Emma Stone (the appropriately titled ‘Emma Stone’) alone.

Following the b-sides release, Baker played more live shows, subsequently went down a storm in Spain, issued a live album and also moonlighted as a member of retro-pop supergroup The New Trocaderos.  It’s a minor miracle that he found time to pen tunes for another solo album, but here it is.  …And while not quite up to the impossibly high standards set by ‘Brand New Beat’, it shows Kurt Baker in fine form in his roles of writer and performer.

At the more aggressive end of the scale, ‘Can’t Say No’ mixes up sharp power pop hooks with an accessible pop-punk riff (courtesy of long-time collaborator Geoff ‘Useless’ Palmer), with Baker retreading an oft-trod scenario of being wronged by a tough girlfriend.  Musically vigorous with an instantly gratifying hook, there are nods throughout to Baker’s chief influences, but the intro – instantly reminiscent of Joe Jackson’s ‘I’m The Man’ – is particularly cool.  Like the debut’s ‘Partied Out’, this tune, perhaps more than any other, shows the ease in which this band of musicians can rock out, bringing a feel good energy with each note.  Similarly sharp and frantic, ‘I Got You’ powers with some great high-energy staccato rhythm guitar, over which Baker sounds like he’s having a great time, bending his voice to the max throughout the verse.  Throw in a twin guitar solo that reworks the main melody and the tune is stellar.  The chorus, on the other hand, might just be a little too basic – never doing anything more than repeating the title incessantly.  Occasionally, things can be carried on such one-line repetitiveness – this isn’t especially one of them, and (by default) it’s the weak link this time out.  Striking the perfect balance between rockin’ rhythms and catchy chorus, ‘Doin’ It Right’ makes up for that shortfall by combining the same youthful verve with one of the album’s more insistent hooks and some great harmony vocals.  Tackling everything at the pace of Joe Jackson’s ‘Got The Time’, the whole band forges ahead as if the mood will be lost forever if they don’t commit this performance to tape instantly…and this number will certainly give the live set a hefty kick up the arse.

The bubblegum pop of ‘Talk Is Talk’ sounds like a leftover from the New Trocs’ sessions, all harmony vocals and late 50s schmaltz, but the combination of Baker’s affected new wave voice and a thoughtful arrangement – complete with country-tinged guitar break – makes for great listening.  The pure pop of ‘Back For Good’, meanwhile, stokes up the harmony vocals on a hooky chorus and really pushes Kurt’s voice to the fore during a simply arranged verse.  The tune is fairly spacious, but still has all the hallmarks of great power pop – along the way you’ll discover a couple of (underplayed) tinkling bells and a chiming guitar that tips the hat to seventies pop like Pilot and Badfinger.  And just when you feel that Baker is going for that “less is more” approach, he steams in with one of those spoken word interludes as per the Shangri-Las.  It’s all cheesy as hell – but ultimately lovable.  With a solid combination of mid-paced rhythm guitars and unashamedly new wave keyboard quirks, the title cut is well structured, bringing the perfect balance between sharp adult pop and retro trashiness.  The interplay between Baker and multi-instrumentalist/producer Wyatt Funderburk pulls as much influence from The Cars and Joe Jackson as is possible – but then, if you’re gonna be inspired, it makes sense to tip the hat to the very best.  The overall performance is very measured, always ensuring the actual song takes precedence over any musical flash, while chorus wise, there’s more than enough to entertain all but the harshest critic.

Tapping farther into the new wave, ‘Prime Targets’ comes with a truckload of analogue keyboard squeals and sounds that hark back to Greg Hawkes and The Cars, coupled with a simple rhythm guitar part and repetitive hook.  Like a great Click Five tune, this one is pretty much guaranteed to get under the skin…and if the chorus doesn’t get you, those keyboards certainly will.  Bringing maximum rock ‘n’ roll, ‘Send Me To Mars’ is another  rollocking affair with plenty of overdriven guitars colliding with a raucous stabbed piano that really gets the adrenaline pumping.  The chorus is tough, the verse spiky, but it’s the fierce lead guitar and piano face-off between Baker, Palmer and Kris ‘Fingers’ Rodgers that lifts the tune to the highest heights.  Like a great track by Kurt’s labelmates The Connection, this rips straight out of the gate and doesn’t let up. It’s easily one of ‘Play It Cool’s essential listens.

Ensuring his homages to the early 80s are at their most effective, as if he’s filling two sides of shiny black plastic , Baker wraps things up in approximately thirty five minutes.  Like Elvis Costello’s ‘Armed Forces’ or The Cars debut, there’s no flab or excess and this album is all the better for that. For those who’ve followed KB’s career thus far, ‘Play It Cool’ is a disc that brings absolutely no surprises.  It mightn’t be as perfect as ‘Brand New Beat’, but for new wave and power pop thrills aplenty, for the most part, it ticks all the right boxes…and then some.