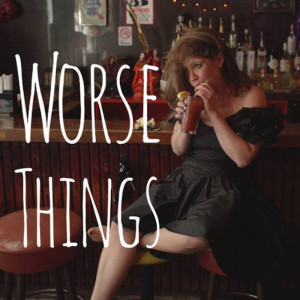 At the beginning of 2015, Brooklyn’s The Rizzos released their debut EP ‘No Parents, No Rules’.  Far from perfect, it showed a great promise for the future and was worth checking out for ‘Vomit Kiss’, a punky number that showed the energy within the band in a brattish and youthful manner.  That glimpsed promise comes really through on this seven track cassette – issued just six months later – where The Rizzos really hit their mark consistently, blending their garage rock roots with some serious early sixties bubblegum vibes and some classy power pop.

An instant classic, ‘Give Me An Answer’ kicks things off with harmonious power pop, all a little sixties and very retro.  The rhythm section work hard to drive things with solid beats while simultaneously keeping things fairly light, with Justin Ferraro’s bass lines occasionally breaking into busy flourishes.  From the moment guitarist/vocalist Megan Mancini starts to sing, it’s pretty much impossible not to like this tune – high in the mix, her voice straddles a fine line between confident trill and a wobbling naivety, the very natural approach being absolutely key to making The Rizzos so lovable.  In a more garage rock tradition, ‘Blackout’ rattles at a much faster pace under the thunderous rhythm dictated by Bettina Warshaw’s drums.  Bolstering the great drum line, Ferraro’s bass skills prove absolutely complimentary, while the rhythm guitar clangs with a thick sound that typifies these relatively commercial garage sounds.  Again, Mancini sounds as if she’s in her element and with a good chorus to hand, The Rizzos are set to give their listeners a massive earworm…and perhaps most importantly, they sound as if they’re having fun.

With a slow and menacing pace, ‘Get Weird’ is essentially a showcase for a fat bassline and heavily reverbed guitar.  Not as catchy as most of The Rizzos’ output, it still has its moments – a wordless hook finds Mancini delivering a particularly spooky “oooh”, while the twangy guitar lines occasionally bring a fifties echo among the tough chords.   More in keeping with the previous EP, the slow ‘Anything I Want You To’ (as previously heard on a free King Pizza sampler) has a fuzzy tone that’s pure garage.  The guitars are nicely stodgy as they churn out their homage to The Shirelles dressed down with a lo-fi cool.  That’s enough to convey a simple attitude, but beneath that, Justin’s bass dances in a surprisingly complex manner, warm and assured.  With these strong foundations, Mancini goes for broke and tackles each line with a genuine sassiness.  In terms of capturing their retro world – plastic seats, milkshakes and drive in movies, but with a CBGB’s tint – in a three minute snapshot, this tune does the job admirably.

Those who love The Rizzos’ purer doo-wop influenced sounds will find a belter in ‘Tell Me’, a hugely melodic number that brings a constant push and pull between Mancini’s smooth vocal and Joshua Park’s lead guitar work, which has a very considered approach throughout.  As before, it’s the main hook that’s the real killer, and the repetition of the title and various questions over a simple melody results in an absolutely unmissable tune.  With a pounding drum and strong presence of garage rock guitar, ‘Gnarly’ borrows a little from 90s indie, where a hard and jangly guitar threatens to dominate.  Unusually for The Rizzos, there’s a strong sense of the tune being more important than the vocal melody this time out, but in fairness, it’s a great track that shows each of the four members’ talents off well. The twin guitars bring a constantly tough ringing sound, while the basslines are rigid but well constructed and the drums pack a reasonable punch.  If that’s not enough, the brilliantly crashy ‘Vomit Kiss’ is reprised here in a re-recorded version. While retaining the energy of the earlier recording, The Rizzos have given things a small buff throughout: Bettina’s drums hit harder, Megan’s hard rhythm guitar work has a little extra shininess that gives the tune a lift, while her vocals have a great crying edge that, although contrasted with the trashy r’n’r backdrop, sounds absolutely fabulous.  She manages to do the impossible in retaining an old-fashioned sex appeal while singing about bodily functions… That says it all, really.

The Rizzos showed sparks of greatness right from the off, but none of the previously issued material comes close to suggesting how good ‘Worse Things’ actually is.  It has a little of everything you’d want from DIY power pop of its kind: the vocals are retro and very emotive, the guitar sounds are lo-fi, yet sharp enough to sound like they belong on a professional release and the songs…the songs are oftwn superb.  Like hearing Velocity Girl channelling a band from the Sympathy For The Record Industry label, this is a listening experience not to be passed over.