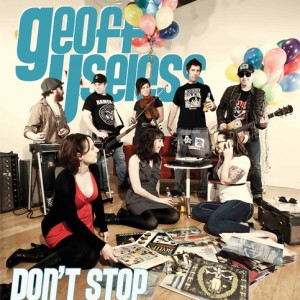 Opening track ‘Don’t Stop’ is perhaps the closest stylistically the album comes to linking with Geoff’s past.  Even then, its whole world of shiny pop/new wave influences has no obvious edge, but who needs edge when you’ve got infectious sunny pop at hand?  Musically, it’s a number very well played: the hugely uptempo style at the core evokes early eighties big hitters like Paul Collins and Shoes.  The simple gang backing vocal is pure power pop gold, the acoustic guitars add a strong backbone, but best of all, Drew Brown’s bassline wanders all over the piece busily, making an ordinary pop-based tune a great tune.  Useless, meanwhile, tackles his lead vocal performance with a curling and slightly nasal sneer, resulting in something that’s not unlike a slightly twisted version of The Leftovers’ Kurt Baker.  This takes a while to tune into, but once you do, it is fairly well suited to his choice of music here.  Perhaps the biggest surprise comes from the presence of a steel guitar that chimes away, where normally a run-of-the-mill power pop band would feature electric guitar flourishes.

…And it’s the pedal steel belonging to Zach Uncles that colours and influences most of the tunes on this record.  From the second track on, it becomes increasingly clear that although it’s Geoff’s name on the sleeve, this is very much a band effort and the country sounds within these tunes take over.  ‘Leavin’ finds the whole band tackling something that sounds like a square dance (albeit with a sneery power pop voice out front), with Zack Sprague’s shuffling drums interacting with a walking bassline throughout – the band going full-pelt from the off and never slowing.  Somewhere amid the jigging is a fun song which conveys energy in both songwriting and performance.  ‘Loser’ quickly follows suit, keeping up momentum as does the full-throttle ‘All Bets Off’, allowing space for electric guitar to chip in a little more of an old school rock and roll ethic.  Much more interesting, ‘Ghost’ takes things down a notch, mixing British Invasion inspired elements with the country twang and a spirited guest spot from Sarah Speltrineri on fiddle.

Bringing the album’s first half to a brilliant close, Useless offers an instant winner with his cover of The Beatles’ ‘I’ve Just Seen a Face’.  Much in the same way as the 2007 musical movie ‘Across The Universe’, the skiffle base of the original 1965 recording is given a shake up, the slight quickening of pace improving an already brilliant tune.  The upright bass carries the overall weight, while a retro twanging guitar brings a touch of attitude.  In keeping with most of ‘Don’t Stop’, Useless adds bluegrass/country elements into the mix via more fiddle and steel, but it really works.  Vocally, he appears more gawky than ever, but given the sense of abandon the band are going for here, it works fine.  Not only does this prove that ‘I’ve Just Seen a Face’ is always gonna be a great song, it’s one that nobody seems to ever screw up.

The second side brings another interesting cover with a take on Brian Wilson’s ‘Love and Mercy’, where the material is treated respectfully even though Useless and his band (rather understandably) never achieve the sonic brilliance of pop’s master-craftsman; that said, in terms of general charm, this still manages to be one of ‘Don’t Stop’s highlights.  Elsewhere, there’s a couple of nods to power pop with ‘Easy Come and Go’, a bouncy number with a great arrangement and chorus (though that steel guitar is irksome) and ‘Tell Me What, where the band mix a brilliant vocal performance with some unashamed Rubinoos-esque handclaps.  While the country stylings are ‘Don’t Stop’s main musical thrust, it’s on these more pop tunes that Useless’s gift for a catchy song shines the brightest.

Perhaps as a direct result of the lack of punk/pop-punk – or perhaps not – ‘Don’t Stop’ is a record overlooked by most.  While the more relentless country moments and near constant bluegrass tempos feel a tad tiring at times and the results can feel somewhat samey (not to mention it not sounding like anything fans expected, or perhaps even wanted), it is certainly not a bad record; far from it, in fact.  Once you’ve tuned in to the varying styles, a strong feeling of fun comes across clearly throughout and the Beatles cover, ‘Breaking Down’ and the shameless bubblegum of ‘Tell Me What’ are nothing short of excellent.

Following this release, Geoff went into project overdrive, first co-founding the record label Collectors Club Records.  Via that label, over the following two years, he reissued this album and recorded and released various 7”s with his power pop band The Connection.  He also lent his musical skills to two excellent 2012 releases by power pop superhero Kurt Baker, with whom he also appeared as a member of The Medallions with Wimpy Rutherford.