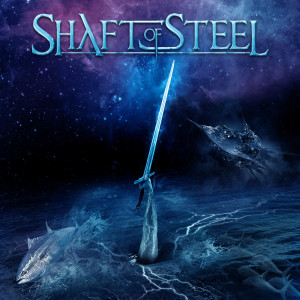 In an age where so many melodic rock discs seem to suffer from average production values, it’s a pleasure when one comes along that sounds almost as sharp as those great releases from the late 80s. Although only an EP, this debut release from London based Shaft of Steel is a bright and shiny affair where everything crunches in the way melodic rock always should, with its four songs delivered with plenty of enthusiasm.

Lovers of the classic melodic rock style will almost certainly raise a wry smile as the intro from ‘Drive’ emerges from the speakers.  Not so much in that it presents a loving homage to sounds of those mulleted days of yesteryear (even though it does so rather excellently), but rather more for the  mischievous lift from Journey.  The shimmering keyboard lines are a dead ringer for ‘Only The Young’ – almost certainly on purpose – but in that instant, it would take a hard heart not to fall for this track’s cheeky charm.  With a couple of soaring guitar leads placed over the top, things build up nicely and with the arrival of the rhythm section, this talented six piece totally hit their stride.  The lead guitars – courtesy of Alex Markham and Robert Carruthers – bring plenty of eighties influenced melodic rock chops in the way they swagger across the verse, with that keyboard  shimmering all the while…and high in the mix, too.  Frontman Robert Fenning’s delivery, although restrained at first, quickly rises to a full-on wail and although maybe a little too loud  for those who’d perhaps like things a bit less theatrical, his style – somewhere between Dennis DeYoung and Robert Fleischman – is generally much easier on the ear than fellow Brit Toby Hitchcock.  Taking  themany layers of this seven minute opening workout firmly into consideration, his style is fine. It certainly befits the huge arrangement which, in turn, is given a great send off in the knob-twiddling depot by Pink Cream 69 man Dennis Ward.

This release is worth seeking out on the basis of that track alone, but the rest of the material also comes with plenty to recommend it, even though it shifts farther away from those AOR tendencies with each passing number.  Moving into ‘Spinning Vortex of Love’, the guitars continue to impress with hugely melodic lines; while the general arrangement is a little less bombastic, there’s a sense of things still being done on a grand scale.  Another very well crafted affair, this tune has a great mix of dirty guitar work, the kind of choppy melodicism that filled the early Takara discs and some top harmonies filling the chorus.  …And any band that can get a decent hook out of the lyric “spinning vortex of love” without sounding like (a) they’ve tried too hard or (b) they’re just plain silly, must have something. At the point where you’re expecting a classic guitar solo, the guitars and keys trade off riffs, with the fretboard work showing a hugely dextrous ability without ever appearing self indulgent. Those keys, meanwhile, adopt an unashamed seventies pomp, just falling on the good side of ridiculous.  Finishing up with some top notch twin leads, the guitarists prove they’ve totally got the chops this band needs to set them apart from so many second (or even third) division melodic rock acts who’ve already secured themselves ties with record labels.

Even bigger ‘Steel Avenger’ melds an Iron Maiden-esque gallop with the grandiosity of a Lee Small recording.  This allows Fenning room to deliver a few classic wails while stretching his voice right across the musical framework.  A little less AOR than the opening track due to a subsidence of bright sounding keys, this is far more in tune with bits of the Icon back-cat, with a huge (and very welcome) increase on twin guitar work.  Stretching across six minutes, the guitarists clearly revel in the rhythm side of things as well as those more showy leads. Although weightier and lengthier than your average melodic rock tune, it’s worth noting that this never drags – there’s always something to catch the ear.  With ‘Release The Lion’, it’s the turn of bassist Andy Cooper to come to the fore, with his weighty sound carrying the bulk of the verse. With a neo-waltz time signature allowing plenty of room to manoeuvre, his strings rattle with a fantastic sound, over which the guitars straddle a simple rhythm.  With an unashamed grandiosity, Shaft of Steel mix pomp and melodic metal here with a real confidence, resulting in a bombastic approach that allows Fenning’s voice to reach for something huge without ever sounding like he’s too being too full on.  Although arguably the weakest of these four numbers – at least from the perspective of being instantly likeable  – it’s hard to not be impressed by the results. There’s a power in this performance, with each of the band members showing a definite flair for their chosen instrument.

Dennis Ward’s production is a big factor towards this EP really standing out, since he brings a huge, punchy sound throughout; very much the kind of professional sound that a few of the leading melodic labels have totally struggled to capture in melodic rock’s leaner years. Of course, had the material been substandard, the best producer in the world couldn’t work miracles, and Shaft of Steel show an incredibly solid understanding of both melodic rock’s past and where they feel they can take it in the future.  If you like things classically melodic but with a huge air of pomp and grandness, chances are you’ll find these four songs are nearing the best sounds that post-1994 melodic rock has to offer.