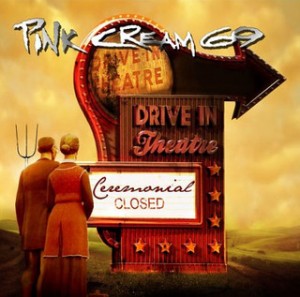 When Pink Cream 69 first appeared in the 80s, their brand of Germanic hard rock found an instant audience in Europe.  Over the years, working through various line-up changes, the band have soldiered on, intermittently issuing albums in the melodic rock/melodic metal vein, but in the UK and US, never really gained more than a cult audience or that necessary shift from seeming like a second division band.

Returning after a six year hiatus, 2013’s ‘Ceremonial’ – unbelievably, their eleventh studio outing – is said to celebrate the rock sounds the band grew up with.  Obviously, this means a dozen more slabs of rock in a melodic rock/melodic metal style with which PC69’s fans have become accustomed… and for the band’s many supporters, that will not be considered a bad thing at all.

From a hard rock perspective, ‘Big Machine’ has a suitably meaty riff – a funky swagger dished up with a dirty edge – which paves the way for a harmonious chorus.  Making his ninth appearance with PC69, sometime Voodoo Circle vocalist David Readman’s voice appears a little ragged but has more than enough charm as he powers through the number, which, despite not bringing anything new to the genre, is fine enough.  A tad easier on the ear, the enjoyable ‘King For a Day’ brings things down to a mid pace via use of the “Don’t Walk Away” riff (AOR fans’ joke), as the twin guitars take more of a back seat.  A tune with plenty of old-school rock potential, the slightly bluesy leads are a high point, as is a melodic chorus with pleasing backing harmonies.  Some may find Readman’s bombastic delivery a little full-on for this kind of material, but overall it pushes all the right buttons within the tried and tested framework of the genre’s style.  Despite being crafted from individually enjoyable parts – cool staccato guitars, strong chorus and quirky hi-hat accompaniment in places – there’s something about ‘Wasted Years’ that doesn’t always seem to sit right.  It’s just a little too busy overall, which combined with Readman’s huge voice, makes it potentially quite tiring.  There’s no doubting that it’s destined to become a fan favourite, however.

With a slightly bluesier mood, ‘Superman’ almost pays homage to the early 80s Whitesnake, a style which suits Readman much better all round, as he reigns in his voice a little in places.  Something about the cocky mood even makes the louder elements of his voice seem more palatable in comparison to a few of the other numbers.  The guitar work ranges from slightly overdriven rhythm parts to tough crying leads – with Alfred Koffler and Uwe Reitenauer proving equally adept at both – but it is bassist Dennis Ward who really shines.  At first it sounds like he’s anchoring the piece with a solid rhythm (as any rock bassist worth their salt should), but occasionally he throws in the more complex flourish which has a knock on effect of really lifting the number.  More impressively, he manages to do this without anything jarring.  From a huge rock perspective, ‘Land of Confusion’ is also worth checking out with its powerhouse riff – showing a huge Dio influence – before featuring an equally bombastic chorus.  Pink Cream may appear to take this all in their stride and do a bang-up job, but in the hands of Jorn Lande, this is a tune which, potentially, could be twice as good!

Rather unfortunate, ‘I Came To Rock’ is spoiled by bouts of over-singing combined with horribly clichéd song writing.  This is a great pity since – looking beyond the claims of “nobody gonna tell me what to do” and “I came to rock / I won’t ever stop” etc – the musical arrangement is halfway decent.  The guitar solos squeal with the necessary amounts of gusto and Ward’s bass playing appears unshakable.  If you like brainless songs or have been in a coma since 1989 you might still like this, but honestly, PC69 are capable of far better, as shown by the best track among these dozen offerings: ‘Find Your Soul’ marks a shift from the band’s usual bombast and is all the better for it. By adding a slightly trippy air of Beatles-meets-hard rock, PC69 prove they can be more interesting than mere rock stompers. This tune is very much driven by the slightly phased sounding guitars and occasional harmony vocals that hint at psychedelia, but it’s coolest element comes courtesy of Chris Schmidt’s drum part, a performance that brings a slight tribal mood to an otherwise beefy hard rock performance.  This is far more interesting than PC69’s usual by-numbers sounds, almost sounding like the excellent King’s X.  They can’t resist taking a more melodic metal approach on the chorus though, with Readman’s crying voice reverting to their truest musical roots.

‘I Came To Rock’ may be embarrassing in the extreme, but aside from that, ‘Ceremonial’ largely presents a bunch solidly played Euro-rock tunes.  That said, there is absolutely nothing here that’s remotely likely to entice new listeners to the band.  They may be totally preaching to the converted with this set of largely predictable offerings…but they’re probably happy enough with that.