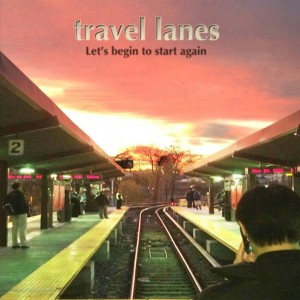 From Philadephia, Travel Lanes is an independent band who credit themselves as power pop with alternative leanings.  Those who approach their work expecting their brand of pop to share much in common with the usual touchstones will feel short changed immediately.  There are power pop elements within their core sound, but they have far more of a country tinged influence.  Instead of paying homage to ELO’s ‘Out of The Blue’, bits of the Wings catalogue or the more modern sounds of Fountains of Wayne, Travel Lane throw a curveball – some of the material here owes far more to very early John Hiatt records like ‘Hanging Around The Observatory’ than any of the usual suspects.

It’s also one of those albums that opens with a track that’s not especially representative of the rest of the material; it also opens with arguably the album’s weak link. The intro to ‘Class Trip’ is loaded with a nineties retro attitude; the guitars attack with a fuzzy sound, while the bass maintains an incredibly huge presence, finding a place between Pixies ‘Where Is My Mind’ and Better Than Ezra’s should-have-been-massive ‘Good’.  Despite the DIY production sound, it still feels as if it might be promising. …And then Frank Brown begins to sing.  His voice, naturalistic – in truth, a little flat, is a total mismatch with the music.  His slightly twangy approach doesn’t have the grit that such a tune deserves and – on this number, in particular – he really sounds like he’s in the wrong band.  The music itself is fine – never outstanding, but certainly has the feel of something with a reasonable amount of power.  ‘Cream Soda’ melds a similar guitar sound to something with a bit more of a southern twang.  This collision of retro rock and power pop feels far more natural; the production values are far crisper and not muddied by the bass and although the verse moves along nicely, things fall apart at the arrival of a dumb chorus.  A pity, since the main riff suggested so much more.

‘But I’m Not’ reinstates an upfront bass, with Mitch Cojurcariu’s playing sounding forceful without ever overly dominating. It’s juxtaposition with an old-school organ and ringing guitars, in some ways, typifies Travel Lanes’ preferred sound.  Much like ‘Cream Soda’, though, there’s nothing overly memorable to back up the solid musicianship – it’s vocally indifferent and lyrically a bit empty.  As with those previous tracks, there are glimmers of something promising, but it never comes through.  A little better, the semi-acoustic ‘It’s My Pleasure’ melds a soft rhythmic strum with a decent but unfussy vocal and intercuts the verses with an interesting ascending scale where the lead guitar and bass come together nicely.  With an enjoyable sound, it’s a shame the actual lyric doesn’t make any kind of impression whatsoever.

Despite these misfires, ‘Let’s Begin To Start Again’ has some reasonable tunes. ‘In The World’ is a joyous recounting of a relationship; musically uplifting, the twin guitars from Brown and Feinberg bring a solid sound, a sound helped immensely by a good production job for a DIY disc, while the rhythm section hammer out a solid beat and bassline.  While musically this sounds like a harder version of something from the Edward O’Connell catalogue, it’s the chorus where it really hits home.  As with so much of the Travel Lanes material, it may be a little over-simplified (something you couldn’t ever level at the wordy O’Connell), but the main hook is one that’s at least very memorable.  Cranking the speed, the cheeky ‘100th I Told You’ bristles with attitude while the electric guitars throw out big chords over a rousing acoustic rhythm.  Brown sounds like he’s in his element throughout, his slightly nasal delivery spitting each word with a classic sneering attitude.  Topping everything, bell percussion tinkles in the manner of a child’s toy xylophone, and although this number would have worked well enough with without this embellishment, it helps give that further lift when required.  Although not the best track on this release, ‘100th I Told You’ shows how good Travel Lanes can sound when all cylinders are firing.  Another upbeat track, ‘No Go’ brings some great jangly guitars and a superb bassline – high in the mix and very punchy – creating a tune that’s reminiscent of the great Cowboy Mouth in places.  Once more, this shows what a tight unit the band are when it comes to creating music and they get it right, it’s just another example of placing the wrong vocal style in the mix.  Despite not ticking all the right boxes consistently, it’s certainly far from the worst number on ‘Let’s Begin To Start Again’.

The straight up country rock of ‘Little Outta Love’ presents Travel Lanes at their best.  Strong rhythm guitars lay strong foundations, while John Bicer’s drumming maintains a steady beat interspersed with great fills that really lift everything.  With steel guitars crying gently in the right speaker channel, the country elements are turned up a bit more, but the goodness doesn’t stop there. A key change into a chorus brings the album’s best moments – with Brown’s Hiatt-esque drawl backed by some terrific, uplifting harmonies the chorus is brilliantly arranged and performed with utmost confidence.   Does this band know deep in their collective hearts that country is their true calling? If so, they need to devote more time to the style…  ‘The Year’ retains the acoustic country vibe with more decent vocal performances, the mid-paced and friendly style this time peppered with a few mandolins.  More understated than ‘Little Outta Love’, this one wins through great storytelling regarding a catalogue of disasters.  Heartfelt and warm, almost everything is so enjoyable, it’s easy to forgive a few bum notes here and there.   While it’s easy to tell that the band enjoys playing tunes with a retro-pop bent, these tunes show so plainly that it’s country that’s their strongest asset.

‘Lets Begin To Start Again’ is a patchy record, but it’s one that’s better than the opening track – and first listens – suggests.  While some of the punchier material is certainly fun, it never makes the important all-important leap to making Travel Lanes seem special in any way.  The couple of country tunes, on the other hand, are terrific – worth checking the album out for alone. If you have time on your hands and enjoy a bit of John Hiatt or, perhaps, even a little Marshall Crenshaw, there are a few good tracks to be heard here, just be prepared to have to cherry-pick from those more forgettable moments.