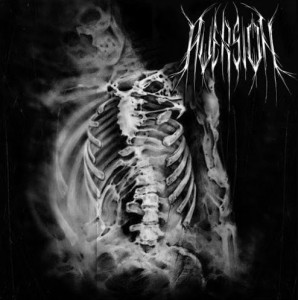 Four years after their formation, Canadian black metal troupe Aversion unleashed their debut release in the summer of 2015. Released two years after a demo, this record still has a very demo-like feel by black metal standards. With a sound that’s never going to win over a huge audience to begin with, the rough and ready feel this album has, Aversion seem set on keeping their audience somewhat selective, but looking beyond that, there’s some reasonable playing.

With little time for embellishing their core sound with cinematic overdubs or extended workouts – as so often characterises their chosen subgenre – Aversion bring things back to basics. For this Quebec based quartet, it’s aggression and speed which are of the most importance. In just under four minutes, ‘Flesh of the Maggot’ presents Aversion’s sound at its most riff-based. With music harking back to an older time and pulling a great influence from the earlier death metal/extreme thrash sound from cult releases by Pestilence, with speed guitar riffs are in full force, Aversion have a solid musical frame.  Their budget, however, makes those late eighties discs by second division thrash and death bands seem extravagant, and although the riffing isn’t always in keeping with more extravagant black metal experiments, the vocal style makes no bones about where Aversion’s chief interests lie.  Throughout this number – and indeed the other seven – frontwoman Vena rasps in classic style, often in a manner which makes her sound like Dani Filth’s angrier sibling.  As always, it’s that kind of vocal that’s make or break and for listeners who enjoy the black metal hissing, Aversion will bring plenty of entertainment despite a somewhat undercooked production sound.  The slow grinding that opens ‘Nie Udalo Sie’ showcases a real sense of menace, with Vena delivering each line with absolute derision, the fact that the lyric is in Polish never really a stumbling block since it’s the overall picture that’s important.  While drummer Vilain showed a reasonable amount of power previously, when slowing things down in this way, his heavy pounding on snare and cymbal really acts as the band’s engine.  This doesn’t last, of course, and after a minute or so – though the funereal pace makes it seem like longer – the band explode into a full-on pneumatic fury, the interplay between the drums and guitars attacking at relentless speed.

Better still – and a strong contender for the album’s stand-out track – ‘Pre-Life Nostalgia’ retains the black metal voice and pneumatic drumming almost throughout, but between the absolutely chaotic fug, there are sections where things slow down a touch.  Slowing down is relative, since Aversion drop from black/death pneumatics to merely breakneck speed, whereby the twin guitars indulge in many classic riffs that borrow heavily from late 80s speed and thrash motifs.  Hearing six-stringers Nemrod and Max Macabre going head to head in the rhythm department and then having the drums fall away for a Megadeth-esque breakdown (circa ‘Peace Sells’) really highlights the tightness in this musical unit.  Hints of classic thrash also run through ‘Your Hate Against Mine’, with the rhythm guitars hammering at full pelt while Vilain attacks his ride cymbal with all the subtlety of a man with a vibrating wrist.  Although less spacious all round than ‘Pre-Life Nostalgia’, it still has its moments, especially during the featured solo, where the lead guitar wanders from thrashy notes into atonal anger that shows an enormous influence from the late Jeff Hanneman.

‘Espoirs Brises’ kicks off with a riff that briefly hints at thrash metal colliding with the early crossover sounds of D.R.I., before Aversion go all out in a frenzy of rasping and musical pummelling. With Vena in particularly harsh voice, those who “get” the sound will love this, but arriving at a haunting and thoughtful instrumental break at the track’s end, Aversion sound even better.  Again, nodding knowingly towards the most extreme elements of Slayer, they really hint at what they could do if they stretched out just a little more, bringing extra layers and complexities without ever losing the overall fuzzy, low-budget blackness.  ‘Sacrifice’ brings almost five minutes’ worth of atonal grinding and doesn’t break any new ground.  It doesn’t really need to, though: within this number the rhythm section prove to be frighteningly tight, while Vena’s performance encapsulates her sneering and venomous retching perfectly.

There are more than a few glimmers of the sound of a band who will undoubtedly get better once they’re afforded more studio time and the kind of budget they deserve.  As it is, the lo-fi qualities do not always make this the most balanced of listens. Even though they’re only likely to reach out to the extreme metal die-hards, for those people, Aversion could bring some uncompromising, grindy entertainment.