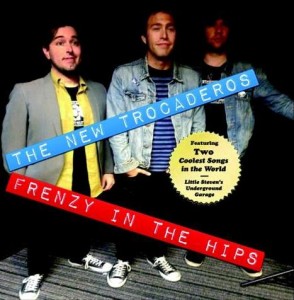 This 2015 Trocs release brings together tracks from a self-released single and an EP, as well as including a previously unheard track for extra value.  Its six numbers combined represent a superb band somewhere near the beginning of a journey and have much to offer those whom consider themselves fans of their other recordings.

The two tracks from the debut release set the bands stall out firmly for all to hear. ‘Money Talks’ is a tough rock ‘n’ roll ode to being skint.  The four chord rhythm comes across like a punk-edged Fabulous Thunderbirds groovathon, while the scorching leads cut through everything with ease.  A tough bass line and handclaps round everything out and with the assistance of Brad Marino’s swaggering vocal, this is dumb rockin’ fun.  Even better, the twanging style of ‘The Kids’ is a truly epic number as far as the retro style is concerned – a hybrid of early Nick Lowe and Real Kids coolness, it’s the perfect vehicle for Baker’s sneering vocal style.  Aided by a wall of backing vocals, this is the sound of band having fun with their art, something not unnoticed when Little Steven proclaimed this ‘the best song in the world’ in March 2014.

Recorded almost a year on, the three tracks originally featured on their ‘Kick Your Ass’ EP bring more of the same, but arguably yielding superior results. Each of its three numbers in a distinctly different style, yet each are complimentary to each other.  What’s perhaps this release’s greatest strength is that each of the songwriters within this supergroup gets a turn a lead vocals.  This goes some way towards giving each of the tracks a different quality.   With the king of new-wave revivalism, Mr. Kurt Milton Baker stepping up for vocals here, it would be easy to surmise that we’d be in for three minutes of skinny-tie wearing, sharp as a pin new wave revivalism – as per the bulk of his solo work – but in doing so, would be so, so wrong.  His contribution, ‘Real Gone Kitty’ (written by band friend Mike Chaney, writer or co-writer of all the Trocs material) taps into some real gone rock ‘n’ roll sounds, the energy and pent-up fury of the late fifties exploding in a giant guitar twang, like Brian Setzer hyped up to the max.  This style very much suits Baker’s delivery and he attacks each line with gusto.  Despite a fiery performance, the real star on this number is pianist Kris Rodgers (also a member of Wimpy & The Medallions), who doesn’t so much as tickle the ivories in a retro sense as pummel them into submission in a manner that channels the ghost of Jerry Lee Lewis.  Very much channelling the ghost, but leaving behind the demons…his piano raucousness combined with Baker’s cock-sure attitude makes for an exhilarating two minutes and is worth seeking out this release for alone.

Much like its title suggests, ‘Dream Girl’ explores jangly sounds and captures the Trocs in a more restrained mood.  A hard twang borrows from British Invasion sounds and is closer in spirit to The Connection.  The general vibe here is one of a lost Merseybeat classic, with a full compliment of rolling drums (courtesy of Craig Sala, another Medallions man), over which twin chiming guitars collide with the kind of shimmering loveliness found on records by The Byrds and The Hollies.  Taking lead vocals, Geoff Palmer (aka Geoff Useless) has a natural slightly nasal tone that just adds so much to the overall naivety of the piece.  Linking the pieces, Kris Rodgers is called upon once more for a touch of organ, his playing understated in the main, but he’s eventually given a few bars of his own to blossom on a particularly fine solo – an exercise in tight playing with no notes left to waste.  ‘Brain Gone Dead’ is a ninety five second garage rock frenzy, with The Connection’s Brad Marino taking lead.  All previous retro melodies are kicked out the door with a size nine boot allowing this group of musicians to truly kick your ass as promised in the title.  Sala leads of with a ceremonial trashing of the snares, his rolls hitting hard before choppy guitars set the tone.  There’s almost a Ramones-ish mood in the air – more in keeping with DeeDee’s later, noisier numbers from ‘Too Tough To Die’ than the more oft heard bubblegum moods of their early records – and the band are on fire.  Given the general speed of the track and increased focus on guitars, it comes as a surprise that there’s still some rockin’ piano to be heard, almost as if Rodgers really wants to assert his importance within the Trocs – and everything here is superb.  In fact, the very definition of “short sharp shock”, the three tracks from ‘Kick Your Ass’ do exactly that.

Last up, the previously unreleased ‘Luckiest Man’.  You’ll probably know what to expect from this, given the musical traits The Trocs have slapped down with abandon previously.  You wouldn’t be far wrong of course, but it would be fair to say this previously unheard ditty comes with a sharper attack due to a crisper guitar sound throughout, while Marino’s lead vocal has a slightly more forceful delivery.  Any harshness is counterbalanced by one of the band’s best arrangements in the backing vocal department, with Geoff calling out the title against the lead voice, adding a cool retro feel – the kind of thing The Queers like to indulge in when flaunting their Brian Wilson obsessions.   At a short an sweet old-school two-and-three-quarter minutes, it’s lean and well executed…and hopefully a sign of good things for these musicians in the future.

If you’ve followed the careers of the associated musicians previous to this release, this compilation is an essential purchase.  If you like retro garage rock tunes or perhaps a little power pop coolness, this is still an essential purchase.   Put simply, you need this…especially if you haven’t ever got around to picking up those previously available EP releases.

Get the CD here!