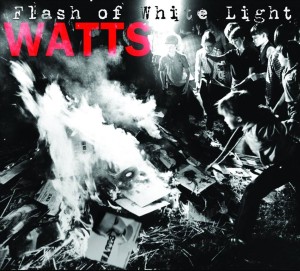 Boston rock ‘n’ rollers Watts dropped their second full length LP ‘On The Dial’ in 2010. Its selection of trashy tunes that by and large sounded like a collision between mid-70s Stones and New York Dolls overseen by Tommy Stinson and the band were more than happy to wear the influences proudly upon their collective sleeve.   A few years on, ‘Flash of White Light’ essentially brings more of the same, though it’s obvious from the outset that the hooks are bigger and the general swagger comes with more confidence than before.   The core of the Watts sound, however, remains unchanged.

At the most direct – and their least subtle in terms of flaunting that influence – ‘Rocks’ even kicks off with a riff that’s almost a direct lift from ‘Brown Sugar’, though tweaked just enough and played louder, firmly marking guitarist John Blout’s heavy hand in the music’s creation.  Joining the riff, the rhythm section of Tim McCoy (bass) and John Lynch (drums) prove to be heavy hitters in the engine room, while vocalist Dan Kopko’s cigarette ravaged vocal rasp is the perfect compliment.  If the UK’s Quireboys chopped in their Faces fixation and reworked tunes from ‘Sticky Fingers’, the results may come somewhere close to this.   Again, boasting a riff with a knowing wink, ‘Flying Over With Bombs’ is instantly reminiscent of Guns N’ Roses’ ‘Sweet Child o’ Mine’ with its shrill tone and especially the way that riff is underscored by the rhythm section.  It’s here that McCoy proves his mettle, his bass rising through the rock sounds with a particularly full performance.  Guitar wise, the sloppy electric sounds that emerge mid-way are classic Watts in their discordance – a particularly free solo helping to sweep aside those early G N’R comparisons.  With such a well-rounded tune, it’s a pity that Kopko is left with little more than a needlessly repetitive chorus to hand, but you can’t have everything.

Knocking both these tunes for six, the title cut takes a Stones-eque riff, amps it up to garage rock volumes and gives it a proto-punk New York Dolls send off.  The riffs are fast and sharp, the vocal pointed, the rhythms hard.  If the speed doesn’t get you, the call-and-response chorus and stabbed piano sound in the left speaker channel surely will; this is old-school rock ‘n’ roll at its finest.  Slowing down a touch, ‘The Mess In The Make Up’ awakens the ghosts of The Replacements and mixes solid riffs with a screamer of a solo and incessant hook – all delivered with drawling (in)sincerity to brilliant effect – while the punchy ‘Trick’ nods rather naturally towards the noisier end of Cheap Trick.  The influences are there musically, but the band hammer the point home farther by name-checking them in the chorus for good measure.  It’s another great work out for the rhythm section, but then since drummer John Lynch sidelines in a Cheap Trick covers band between Watts duties, its only fair such influence should be flaunted.

Knowing they can’t just trot out more of the same on an infinite loop – although, admittedly, that’d be great – ‘Wrapped Like Candy’ is more laid back from the outset, a slow arrangement allows a clean toned guitar to drop in with a more low key riff, a tone that’s perhaps closer to melodic rock than bar-room swagger.  The vocals croon accordingly, but from the second half, Watts stop fighting the urge to rock out and crank the dials; the guitars mark their place with something grubbier, a few leads reverting to the dirty.    Kicking into ‘Wasted Angels’, it’s mere seconds before Watts can be heard at their best once more – Blout’s main riff drives home a simplistic attitude, while a thinner chord progression chiming through the chorus is a dead ringer for Keith Richards circa 1971.  The chorus is a repetitive affair, but its equally simple attitude is a perfect foil for the riff.  If you want Stonesy attitude painted with a more garage rock undercoat, this is a sure fire winner.

If you liked ‘On The Dial’, you’ll love ‘Flash of White Light’.  If you’ve never heard Watts, start here. Granted, pretty much everything works to a very strict formula, but if trashy rock is your bag, it’s eleven tunes will likely push the right buttons, perhaps even bravely attempting to the fill that void left behind when Stinson’s Bash & Pop prematurely pulled the plug.  Sometimes a bit of old time rock ‘n’ roll is all you need…and Watts are happy to oblige.