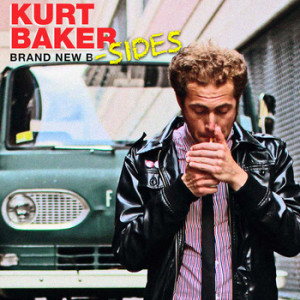 Truth is, most of these eleven “leftovers” are pretty much as good as the tracks that made the original album.  Baker’s gift for a melody combined with his distinctive curly vocal style makes for good times even on material marked for the supposed second division.  There’s no messing around, as Baker kicks off this party with the sub two minute attitude adjuster ‘Quit Dancing With My Girl’, a full throttle workout that has more in common with ‘Want You Around’ than any of ‘Brand New Beat’.  With a bubblegum punk intent, the rhythms come fast and KB’s choppy approach to the six string has real drive.  While his enthusiastic vocal performance really hits the mark, it’s with the next two numbers KB is guaranteed to thrill extant fans.  Working closely to his tried and tested Joe Jackson/Shoes inspired blueprint, ‘Lost In Translation’ mixes grumbly bass and new wave keyboards with a strong guitar melody and a chorus that sounds like Jackson re-tooled by the equally legendary Rick Springfield.  The melody is so distinct and the harmonies so well placed, not even a discordant guitar solo derails the pop goodness. ‘Emma Stone’ (previously included on the French press of ‘Brand New Beat’) is a power pop classic with its trashy theme of lusting after the titular actress, giant hooky chorus and rhythmic bar-chords.  For those familiar with ‘Brand New Beat’, this track will sound like an old friend – just one listen is enough to make it feel like it’s been part of your life forever.  As with other tunes capturing KB at his best, it’s tough but always melodic, and behind the most obvious arrangement, there’s something to catch the more discerning ear – here, that job falling in the hands of a particularly fine bass line.

Slowing things down, ‘I’ve Tried Everything’ is a heartfelt plea for companionship, the sentiment closer echoing Brian Wilson’s loneliness than Phil Spector’s teen girl car-crashes.  Baker takes the well-worn topic and ensures it doesn’t sound stale, pitching a strong vocal against an electric piano and chiming guitar.  Long standing fans will love this track from the off, but better still, ‘Think It Over’ is a loving homage to Northern Soul sounds, borrowing melodies from Chuck Wood’s ‘Seven Days Too Long’ and a hint of Martha Reeves for good measure.  Surprisingly, this also sounds like a natural stylistic choice for the musicians involved – as well as being quite far removed from the likes of ‘Quit Dancing…’  Quite how this wasn’t considered right for the album in 2010 is somewhat of a mystery, especially considering it’s streets ahead of the similarly paced ‘How Many Times’.

With the synth-pop, pseudo disco approach of ‘City Lights’, it’s possible you might find yourself wondering what Baker was thinking.  The increase in disposability due to a heavy use of synths doesn’t necessarily play to the singer-songwriter’s best strengths, but it at least proves he’s not necessarily keen to just mine the same musical rut, even if the end results aren’t his best.  Just one listen to the guitar driven ‘On The Run’ with its stomping beat and Lynott-esque phrasing and you could forgive him any musical misdemeanours, especially once a harmony filled chorus – drawing influence from Shoes and Donnie Iris – and a fuzzy, multi-tracked guitar solo both really deliver.  Like ‘Think It Over’, this is top drawer Baker…and it’s absence from ‘Brand New Beat’ is just puzzling.  Elsewhere, ‘Since You’ve Been On My Mind’ is well-arranged pop with a near easy listening bent – one of the more obvious left-overs, and while a festive ditty ‘Christmas In The Sand’ may only warrant a seasonal outing, its beach themes combined with tambourine and fake “party in the studio” atmosphere provides a nice homage to the ‘Beach Boys Party!’ album from 1965, before a cheesy spoken word greeting tips the hat to the much loved ‘Christmas Gift’ from the Phil Spector stable.

Joining the original compositions, ‘Brand New B-Sides’ is also home to two top-notch cover tunes.  Taking a grubby riff – and a recording that’s slightly less polished – Sylvain Sylvain’s ‘What’s That Got To Do With Rock N Roll’ teases with a more garage rock scenario, while Nick Lowe’s ‘So It Goes’ is just tailor-made for Kurt Baker.  He knows this too, choosing not to play with the original arrangement in any way at all.  Like Joe Jackson’s ‘Is She Really Going Out With Him’ and Elvis Costello’s ‘Pump It Up’ (both of which are found in the Baker back-cat somewhere), this number is one of new-wave’s touchstones; if Kurt can bring it to a few new ears, then it’s a job well done. While neither cover quite hits the mark of ‘Sleeping With The Television On’, both really capture the fun that was clearly had during the many sessions that led to ‘Brand New Beat’s creation.

Overall, the weaker numbers mean that ‘Brand New B-Sides’ is always likely to play second fiddle to its parent album, but with numbers as strong as ‘Emma Stone’, ‘Quit Dancin’…’ and ‘On The Run’ close at hand, it’s still far stronger than most artists’ collections of orphaned tracks.  Fans will want this, but the merely curious, naturally, should seek out ‘Brand New Beat’ and the ‘Want You Around EP’ first.

[A review of the Wimpy & The Medallions EP featuring Kurt can also be found here.]