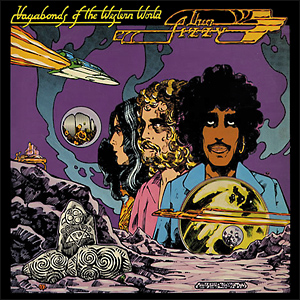 By the end of 1972, Thin Lizzy had attracted a cult audience, but also had two albums under their belt which were commercial failures. Early 1973 bought a change in their fortunes when their reworking of the Irish folk song ‘Whiskey In The Jar’ (released as a single in November ’72) became a huge hit. Eventually reaching #6 in the UK chart, it gave them massive exposure on radio and even scored them an appearance on ‘Top of the Pops’. The song also became a German top 10 hit and a number one single in Ireland.

Work on their third album would not commence until the summer, with Lizzy returning to the studio in July 1973. Recorded in London, the resulting third album ‘Vagabonds of the Western World’ was to be the band’s most coherent and confident work to date.

With their blues-rock leanings upfront,‘Mama Nature Said’ combines thoughtful lyrics concerning environmental issues (long before it was common) with a hard-edged slide guitar boogie. Eric Bell attacks his guitar in a way rarely heard on Lizzy’s first two albums, while drummer Brian Downey does a great job in keeping time in an unfussy manner. Lynott’s bass line is unwavering and his assured vocal delivery sounds better here than on most of Lizzy’s previous recordings. While the boogie nature of the track may have its limitations, Bell takes the opportunity to turn in a superb solo (again, slide based). The whole experience is rounded out by organ flourishes (courtesy of Jan Schelhass, then a member of The Gary Moore Band). In all, it’s a great opening number.

Due to its attempts at being theatrical, ‘The Hero and The Madman’ falls at the first hurdle. Between Lynott’s rather grandly sung verses, there are spoken word passages regarding the journeys of the two protagonists, performed by DJ David ‘Kid’ Jensen. By including these, a track which once may have been quite decent, becomes a bit silly. If you can make it past these novelty sections, there are moments during the track’s six minute duration that are musically interesting. A warm bass sound and heavy reliance on wah-wah guitar work (even if sounding somewhat dated) both provide some listening enjoyment, and beneath it all, Downey contributes some great percussion.

After a bombastic intro combining huge drums, wailing guitar and a vocal belonging to a troubled soul, ‘Slow Blues’ settles into a groove which is closer to a funky strut than traditional blues. Like ‘Mama Nature Said’, you’ll find nothing overly complex here, but the live sound of the recording allows each of the three band members to shine. While most of the upfront moments centre around Bell’s guitar work, it’s Lynott’s approach to the bass which makes for the most compelling listening.

‘The Rocker’ is a hard hitting rock number which not only paved the way for Lizzy’s later 70s works, but would become a fan favourite, remaining in the band’s live set for many years. Its relative simplicity is it’s key. Eric Bell’s part jangling, part sharp-edged guitar riff offers the number’s first ear-catching hook, but it’s Lynott’s brilliantly cutting and slightly arrogant vocal delivery which provides the track’s real lasting appeal. A high level of confidence, combined with a storytelling aspect is present in most of Lizzy’s best work, but here it’s classic – a definite forerunner to ‘The Boys Are Back In Town’ and ‘Warriors’. During an extended guitar solo, Eric Bell really excels. Beneath the lead work, Lynott’s bass runs are buoyant, though never attempt to upstage, since Lynott fully recognises that ‘The Rocker’ is Bell’s moment in the spotlight.

‘Vagabond of the Western World’ is another mid-placed blues-rock workout with storytelling vocals. Nowhere near as silly as ‘The Hero and The Madman’, nor as grandiose as Lynott was capable, it’s one of the album’s weaker numbers, though that’s not to say it isn’t enjoyable. Eric Bell’s solo is decent enough, but falls a little flat compared to ‘Mama Nature Said’ or ‘The Rocker’ (the latter, especially). The most striking feature here is the Irish-influenced ‘tura-lura-lie’ vocal refrain – but sadly, not quite enough is made of it; and in terms of Irish influenced folk-rock-blues, it will never come close to being as good as Lizzy’s (arguably definitive) version of ‘Whiskey In The Jar’.

A gentle and lovingly created ballad, ‘Little Girl In Bloom’ showcases Lynott’s gift as a lyricist, telling a tale of a teenage girl’s unexpected pregnancy. While the original three-man Thin Lizzy had some great tunes, this one is undoubtedly their finest. After a feedback intro, Bell’s guitar chimes in tandem with Lynott’s bass. Lynott’s vocal is aching – as if he genuinely feels for the girl in question. The harmony vocals on the chorus sections between Lynott and Bell are just perfect in their understated delivery; and with Lynott’s gorgeous, high in the mix bass runs backing him during the closing minutes, Bell’s guitar solo provides a particular high point. It’s one thing to talk about this as being the original Thin Lizzy’s crowning achievement, but honestly, it could even rank among the ten best songs recorded by any Lizzy line-up during their twelve years together.

‘I’m Gonna Creep Up On You’ is suitably aggressive, with Lynott’s bass thundering against Downey’s drums. Bell’s wah-wah driven riff is another of the original Lizzy’s hardest. This takes the power trio moments of their debut and delivers them in a far more uncompromising manner. Here, the music speaks for itself; with the groove acting as the main hook, the rather simplistic lyrics are almost redundant.

Closing the original album, ‘A Song For While I’m Away’ showcases the band’s wistful side. Lynott’s gentle vocal casts him again in the role of troubadour fronting a sublime arrangement, dominated by strings arranged by Fiachra Tench, (who would also work with Van Morrison and later be credited for the string arrangements on The Pogues’ ‘Fairytale of New York’). Downey plays a simple rhythm based around the hi-hat while Bell’s guitar rings out fantastically behind Lynott’s saddened vocal. It acts as a great closer for both the album and the first chapter in the Thin Lizzy story.

The first CD issue of the album adds a couple of non-album single releases and their b-sides as bonus tracks. A full length ‘Whiskey In The Jar’ is a most welcome addition, while the latin influenced ‘Randolph’s Tango’ rarely feels more than quirky, despite top notch percussion from Downey, a Spanish guitar solo courtesy of Bell and a typically wordy vocal from Lynott. Certainly an unexpected choice for a single release. Regarding their respective b-sides, both are excellent. ‘Black Boys On The Corner’ is a great, boastful number powered by a fantastic guitar riff. Another of the original Lizzy’s forays into genuine hard rock, this almost sounds like a prototype for their 1976 number ‘Johnny The Fox Meets Jimmy The Weed’. ‘Broken Dreams’ is a heartfelt blues workout capturing Bell’s fuzzy guitar tone in full flow and one of Lynott’s most impassioned early performances.

In 2010, almost three years after it originally appeared in the schedules of forthcoming releases, a deluxe 2CD version of ‘Vagabonds’ was issued. Arguably the definitive version of the album, not only does it sound better than ever thanks to a superb remaster, it features a wealth of bonus materials.

In addition to a remastered version of the original eight track album, bonus tracks include (as before) the ‘Randolph’s Tango’ single and ‘Broken Dreams’ b-side. Also featured are single edits of ‘Whiskey In The Jar’ and ‘The Rocker’ and their respective b-sides ‘Here I Go Again’ and ‘Cruising In The Lizzymobile’ (aka ‘A Ride In The Lizzymobile’, a once incredibly rare b-side, issued only in Germany). Both tracks make their first authorised appearance on CD outside of the ‘Vagabonds, Kings, Warriors and Angels’ box set. An edited version of ‘Randolph’s Tango’ (originally the b-side from the edited ‘Whiskey In The Jar’ 7”) and an unreleased alternate/overdubbed version of ‘Slow Blues’ (dating from 1977 and featuring Gary Moore) are both welcome, but inessential. For those looking for previously unavailable material, the deluxe version of ‘Vagabonds’ offers a second disc of live sessions recorded for the BBC.

While this double set is excellent, fans may note that both the full length version of ‘Whiskey In The Jar’ and ‘Black Boys On The Corner’ (found on the previous expanded release) have been omitted. [Both tracks can now be found on the remastered version of Thin Lizzy’s 1972 album, ‘Shades of a Blue Orphanage’]. For these not to be included when the single version of ‘Whiskey In The Jar’ is still present makes little sense. Finally, the deluxe ‘Vagabonds’ includes ‘Little Darlin’’ – the first single recorded by Thin Lizzy Mk 2, with Gary Moore replacing Eric Bell – and the rather clumsy ‘Sitamoia’, which although dates from the same period, remained unreleased (and with fairly good reason) until 1976.

Those two tracks would represent the last completely original material Lizzy would record for the Decca label, though the band recorded overdubs for a few Decca era tracks during the Christmas period of 1977. Most of those overdubbed tracks saw release on a 1979 compilation LP, ‘The Continuing Saga of The Ageing Orphans’ [They subsequently can be heard as part the expanded CD versions of ‘Thin Lizzy’ and ‘Shades of a Blue Orphanage’. The version of ‘Slow Blues’ overdubbed at the same sessions remained unreleased for another two decades, eventually appearing on the 2CD deluxe ‘Vagabonds’.]

Surprisingly, after the huge single success of ‘Whiskey In The Jar’, ‘Vagabonds of the Western World’ failed to chart at the time of its original release in September ’73. It would be their third (and last) unsuccessful album for Decca [Presumably, that’s why the label then attempted to cash in on the Lizzy legacy by repeatedly issuing compilations of their lesser known early material, totalling seven compilation albums released between 1974-82.]

By the end of 1973, Thin Lizzy may have gained popularity and ‘Vagabonds of the Western World’ certainly moved the band further in the direction of the hard rock style that would make their fortune, but any real worldwide commercial success was still a couple of years away.

2 thoughts on “THIN LIZZY – Vagabonds Of The Western World”