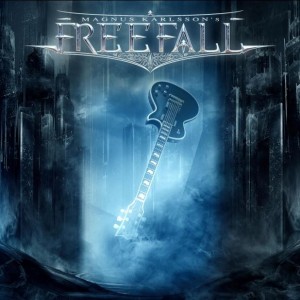 The title track kicks off with a hugely theatrical intro, with Karlsson pitching a selection of twin lead guitars against sampled string sounds and a militaristic drum.  Instantly, he’s grabbed you…and you know this is going to be big.  Swiftly, the band breaks into an arrangement tapping in to the more melodic end of old school metal with the riffs taking on European slant. The role of lead vocalist is filled by one of the scene’s finest: Mr. Russell Allen.  The Symphony X/Adrenalin Mob frontman has plenty of the kind of presence and power you’ve come to love, but compared to some of his Adrenalin Mob performances he’s clearly pulling back his delivery here.  It’s surprising to hear Allen sounding a tad scratchy in places, but even at half-power his presence still bigger than most…and on this particular number his huge voice is a great accompaniment for Karlsson’s very accomplished riffing.  By the time Karlsson steps up his game and launches into a particularly nifty solo – with plenty of sweeping moments – this becomes a mighty opening statement. ‘Higher’ comes with slightly less pomp and more Euro power metal, as you’d expect from something with Ralf Scheepers at the mic.  Scheepers appears a little more melodic (ie: more tolerable) than usual, but not so melodic that he’s overpowered by any of the music.  …And that music comes like a Euro sledgehammer; all pounding bass and squealing twin leads.  The verses riffs tip the hat to ‘Painkiller’ era Judas Priest, while the chorus aims for power and melody – achieving both to a high standard. At this early stage it becomes clear that Karlsson knows how to arrange a tune to gain maximum impact, but unlike some pomp/power metal collaborations, doesn’t ever labour his point by dragging everything out unnecessarily.  As with ‘Free Fall’, the high point comes via a guitar solo fitting in as many notes as possible without sacrificing any melodic bent.

The album’s weakest offering ‘Not Your Saviour’ is let down slightly by being just a touch too full on.  Daniel Flores’s double bass drums thunder brilliantly and the riffs attack at a fierce pace, but sometime Masterplan/At Vance mouthpiece Rick Altzi throttles every line like a man who’s attempting to leave everyone else in the dust.  Individually, each of the main elements here are perfectly fine – the sharp rhythm guitar work ensuring this comes off with a thrashy intensity – but combined, it’s just too much power and not quite enough melody.  That said, many fans of very old-school metal might still find plenty of neck-snapping enjoyment.  ‘Fighting’ leads off with a melodic riff and pompy, stabbing keys.  One of the album’s most accessible numbers, Karlsson offers an intermittently monstrous riff, while the keys fill empty spaces in the manner of a string section.  During those quieter moments, Herman Saming (of hard rockers A.C.T.) has a voice reminiscent of Zebra’s Randy Jackson – a high pitched warble that won’t be everyone’s cuppa – and, surprisingly, it’s also powerful enough to match even the heaviest sections of this varied arrangement.  This display of light and shade provides an enjoyable four minutes in all, proving Karlsson hasn’t just set out to hammer a few Euro-metal clichés and then call it a job done. [Lots of Escape Music artists could learn from this…]

Tapping into some hugely melodic AOR, ‘Stronger’ finds our guitar hero backing the distinctive sounds of ex-TNT man Tony Harnell.  In the past, Harnell has had a tendency to oversing almost anything he came near, but here his voice has charm – and although subject to a little studio trickery – his high, long notes sweep across a particularly melodic chorus.  Marvellous stuff indeed; this track is a recommended listen for most melodic rock fans, especially those who love a power-ballad featuring  a vibrato-fuelled guitar.   An equally brilliant track, ‘Our Time Has Come’ (featuring one-time Malmsteen man Mark Boals) brings some of Harnell’s sense of melody, but combines it with the kind of musical force evident during the opening track.  This mix of styles shows off Karlsson’s range within a single number and although the results are, naturally, very Scandinavian, the combination of Boals’s strong voice and Karlsson’s sweeping guitar work is a near perfect match.   Another highlight, ‘Heading Out’ focuses less on the shreddier side of Karlsson’s guitar work and allows melody to cut through the hard rock via a combination of heavy bass riffs and a blanket of keyboards.  The slightly pompy but ultimately unshakable mid-pace arrangement is well suited to Pink Cream 69 man David Readman, whose voice brings a huge amount of melody to the table.  [Fans of Pink Cream’s 2012 release ‘Cermonial’ may find this required listening].

Longtime followers of Karlsson’s work will love ‘Last Tribe’. Named after one of his earlier musical projects, it reunites the guitarist with that band’s vocalist Rickard Bengtsson.  Almost as if no time has passed, the pair sound natural together, as Bengtsson’s natural hard rock voice (sounding a bit like a Scandinavian Bernie Shaw) rises and falls over a combination of tough riffs.  As with many of these tunes, genre fans will not be particularly surprised by the end results, but most will certainly enjoy what they hear.

While some may find the music a bit too huge to chew through in one sitting, the variety of voices on ‘Free Fall’ ensures things never get too samey. In terms of pompous and epic rock, this represents the genre at its best – it’s everything the 2013 project Rage of Angels should have been, but never could be whilst constantly being stifled by Ged Rylands’s average song writing.  In short, this first solo release from Magnus Karlsson is a big, bombastic and (mostly) well-executed, resulting in a fantastic release for Euro metal fans.