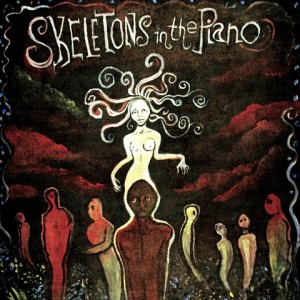 Skeletons In The Piano are the stuff of your technicolour dreams and your darkest nightmares.  Billing themselves as falling somewhere between The Doors and Black Sabbath, this New York septet’s sound constantly pulls between extremes, often favouring moods lodged inside the dustiest corner of the imagination.

Kicking off this second full-length, ‘The Price I Put On You’ fuses swing and carnival atmospheres with occasional bluegrassy plunking at first, deliberately wrong-footing the unsuspecting listener.  Just as you think it’s just going to be a retro ride and maybe these Skeletons have taken a new direction this time out, they crank their gears and some very, very dirty guitar work pushes things in a much more intense way.  With the music shifting from near rootsiness to fuzzed up proto-metal, the vocals croon in the same way they first grabbed your attention, but loudness prevails as metallic guitars churn out big riffs under the sounds of a haunting violin.  It’s huge, it’s loud and there’s no way these sounds can be ignored.  With similar levels of unapologetic bluster, ‘Disposable Televisions, Disposable Guns’ combines staccato riffs, violin squalls with growling metal vocals and more typical crooning from Elijah Hargrave to create something truly epic.  Once all of these disparate musical strands are fused together it’s pretty thrilling – as if experiencing ‘Bubblegum’-era Mark Lanegan jamming with Hermano while reinventing the early works of Love.  Paranoid, lolloping, effortlessly cool.

Bringing things down to a more digestible level, the brilliantly titled ‘Memory Lane Needs a Garbage Man’ pulls some very nineties influences from the hat with its groove led rhythms courtesy of drummer Eric Donovan, whose playing is nice and tight throughout. Like the early Screaming Trees and Gary Lee Conner’s Purple Outside with a pinch of Queens of the Stone Age, the lead guitar work evokes the psychedelia of the late 60s with some bluesy, wah-wahed tones. Of particular note – and also invaluable in helping this number retain a very old-school feel – Jeff Ayres lays down blankets of organ which although never offer anything too flashy, have a superb tone.  It’s one of a few numbers where Skeletons In The Piano appear at their most driven – never trying too hard to impress – and as such, it shows off their obvious talents in a superior way.  Also tapping into something more slightly more tuneful, ‘Long Pig’ pushes a few folky/bluegrass elements to the fore; Brad Thibodeau’s banjo fills the left channel, playing excellently off a lead violin for most of the instrumental sections.  It’s not all backporch Americana of course, and in pure Skeletons tradition there’s a reasonable amount of noise making too, as the guitars crank a fuzzy, acid trip of a riff over which Elijah wails at his hardest.  In the name of a chorus, there’s nothing too memorable here, but in the end, that doesn’t really matter – the powerful nature of the music is far more important than a hummable tune.  …And if it’s power you want, these guys constantly deliver the goods.

More Screaming Trees-esque than any of the other material here, the verses of ‘The Blood Beyond’ allows Elijah to tap into his inner Mark Lanegan once again. For those who like whiskey soaked, emotive voices, this is a treat as his voice melds perfectly with the wobbly waltz laid down by his band mates.  As with other Skeleton craft, the haunting beauty is intercut with something more forceful.  In this case, absolutely huge sledgehammer riffs crash through the choruses, threatening to break speakers en route.  Brass sounds appear surprisingly complimentary to the heavy guitars and metallic growls.   With any spaces filled by fuzz bass, lead guitar breaks hinting at 70s prog and more brass, this is a veritable kitchen sink overflowing with anger and paranoia.  With twangy guitars, a busy bass and vocal harmonies topped with violin, ‘Oh, Rose’ pulls together almost everything from Skeletons’ musical melting pot and squeezes it into seven minutes.  It may not be as quite as heavy as some numbers, but in terms of intensity vs. atmosphere, it’s among the best – especially during the instrumental break where distorted bass and reverb sounds paint a musical spiral of darkness.  Pulling this huge number to a close, the drums take on a very rock mantle, while the strings do their utmost to ensure a dark mood.  Everything here works just about perfectly, even though a few of the vocals get lost in the melee.  The only thing missing for the full early seventies experience is a slab of Hammond organ.

If you can tune in, these eight songs are best experienced in one hit; that experience is pretty hard going in places, but it’s important to be familiar with the whole picture to hear the way this band’s music weaves atmospheric brilliance from chaos. ‘Please Don’t Die’ is kind of a mess, revelling in the path of destruction left in its wake, but  such haunting ugliness rarely sounded so good.