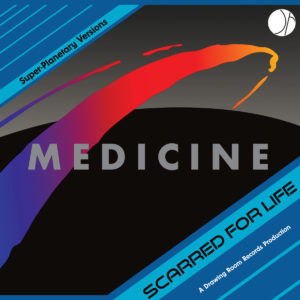 Covers albums can be a lazy stop gap, a contractual obligation filler or – worst of all – a pointless exercise in rehashing tunes with no imagination. When done well, they can be fantastic and make you hear things in a way you never imagined. In the hands of Los Angeles noise rock/shoegaze band Medicine – famous to UK audiences for their contribution to the soundtrack for ‘The Crow’ – 2019’s ‘Scarred For Life’ provides an opportunity to dive into the past and re-imagine various cult tracks, bringing a few of their choices to a whole new audience. Although you might expect a band like Medicine to take the easier route and fuzz up a few old gothic favourites, on this eleven track release, they give their fans lots of surprises. Taking various songs from the 60s and 70s (in addition to a couple of other detours) this is a record that, in their own words, “relieves the glory of the K-Tel architechts”. That doesn’t mean the band are about to cover the likes of ‘Yellow River’, ‘Jeans On’ and a well known Suzi Quatro hit, though. This is Medicine, after all…and their voyage through decades past often favours deeper cuts.

Although arguably one of the disc’s lesser known tunes, Medicine break their listeners in fairly gently with the title cut. Very little has changed from Peter Blegvad/Slapp Happy’s original tune; there’s still plenty of bounce and the way a lead guitar rings through with a simple musical hook really gives the track a great appeal. The major change comes with Medicine’s wall of sound approach; a song that once felt quite sparkly now presents itself as a reverb drenched swamp. The heavy rhythms combined with a great vocal are enough to see it through, of course, and if you didn’t know the origins of the song, it would hold up extremely well in its own right. Of particular note here is the way the vocal occasionally curls with a heavy twang. It’s perhaps the last place you’d expect to find a gentle influence from the great Judee Sill, but nevertheless, it’s there. Sill actually has a place among the band’s many musical inspirations and Medicine’s treatment of her lesser known ‘Dead Time Bummer Blues’ comes across excellently with an odd juxtaposition of bouncing rhythms and fuzzy, distorted guitars, changing a once Carole King-ish piece of singer songwriter pop into an acid rock haze. The marriage of howling guitars from the right speaker channel and a chugging, fuzzy 90s alt-rock sound in the left sets up a great sound, while a semi-buried vocal offers an unsettling and almost sardonic vibe. Always a left of centre lyricist, there’s every chance that Judee would be intrigued by this recording.

A stunning version of ‘Sally Go Round The Roses’ trades in its usual lilting acoustic charm and places the vocal over a droning psychedelic loop. The decision to turn a folk standard into a deep 60s-via-90s inspired trance number is a master stroke. Despite sounding like a semi-atonal head trip, it provides the album with a guitar playing highlight when a fuzzed up lead breaks through the wall of sound. Considering it all starts out sounding more like a cover of The Beatles’ ‘Tomorrow Never Knows’, by the mid-point, the once slight melody actually begins to sound more like the tune you’re expecting…and once you’ve attuned to that, there’s so much to love. Equally inventive is a cover of the Fleetwood Mac album cut ‘Sentimental Lady‘ – later a hit for a solo Bob Welch. As with most of the covers, Medicine have chosen to keep the vocal melody intact, and from that, the tune has been drastically restructured. The amount of distortion used makes it one of the album’s most intense cuts (and certainly, if you didn’t know this were a cover, it could be a Medicine classic), but the way the original melody peaks through the gloom like a brief ray of sun is just magical. Buffalo Springfield’s ‘Expecting To Fly’ is replayed with a heavy filtered vocal effect and carries elements of Wilco and Cowboy Junkies at their most spaced out, making it the album’s most accessible track and a great entry point for the unfamiliar. The use of laconic harmonies weaving in and out of mellotron noises against a live drum takes the number in a pure dream pop direction and as with most of this album’s material, Medicine really make the track their own.

The album’s most obscure number, ‘Green Country’ (originally by jazz man Jimmy Guiffe), gets slightly reworked to give it more of an electronic, Eno-ish slant and although enjoyable enough, it feels like filler material when measured against the rest of the disc. The same could be said for a take on Codeine’s ‘Pickup Song’. One of the only times where a lack of familiarity all round could lead to potential indifference, it’s definitely the weak link and not that interesting. A cover of Scritti Politti’s ‘Sweetest Girl’, at least, aims for some listener interest, even if it doesn’t quite work. One of those numbers that was briefly inescapable in the 80s, it’ll be more familiar to some UK listeners as a Madness cover. Madness adapted it with their usual flair, and Suggs’s natural voice lent the lyric a different kind of sadness, but Medicine go all out to ensure the song is heard in a whole new light. It gets run through a Casiotone loop, adjusted to a reggae rhythm and then augmented by some subtly used shoegaze influences. It’ll surely split opinion as to whether it works or not. On first listen, it sounds like a misfire; later listens suggest it’s merely one of Medicine’s wobblier experiments. It’s always tempting to say “nothing’s perfect…” and that would certainly be true, but this track’s shortcomings have much to do with most of the album’s inventive charm than this being especially bad. A semi-distorted cover of The Monkees’ ‘Listen To The Band’ takes the guts of the 1969 cut, removes the country elements – a heavily accented vocal and steel guitar – and replaces them with a heavier rhythm and a voice that’s much closer to psych-pop of yore. One of those tracks that’s enjoyable from first listen, it’s both a reminder of The Monkees’ charm beyond the overplayed hits and the bredth of music Medicine enjoy in their spare time.

It takes courageous souls to cover anything from Zappa’s catalogue – and seldom does anyone try – but with a great version The Mothers of Invention’s ‘Absolutely Free’, Medicine give this album another essential cut in the event. Shorn of it’s avant garde piano aspirations and occasionally cartoonish voices, the song takes the form of a jovial 60s psych gem where harmony vocals jostle with rattling, militaristic drums. Clanky harpsichord parts buried beneath the guitars suggest more of a Dukes of Stratosfear feel, but without losing too much of the original version’s spirit. Frank would probably hate it, of course, but that’s beside the point. In the hands of most, that would be the album’s most unexpected cut, but since ‘Scarred For Life’ knows no boundaries, Medicine go even further off piste at the end of the record with a noisy, hard and rhythmic take on Miles Davis, when they take his ‘Black Satin’, lend it a heavier drum part and replace the brass with atonal guitar noise. Again, there are going to be a few purists who’ll scoff at the result, but hearing a great rock band tackle a great jazz fusion classic is an interesting listen. It’s something that might appeal to fans of bands like The Book of Knots and Secret Chiefs 3.

At first, ‘Scarred For Life’ gives the impression that it could be hard going, but once you’re in the zone, most of Medicine’s soundscapes and reworkings create one of the best and most imaginative covers albums you’ve ever heard. This is far more than a stop gap or contractual filler – it’s stunning. An album recommended to everyone with a sense of adventure.