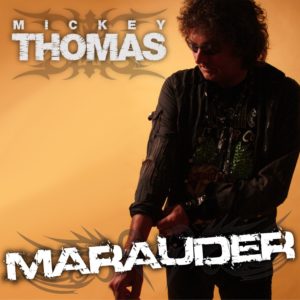 As a very gifted vocalist, in theory, the idea of Thomas recording a covers album featuring a range of styles is very welcome.  However, in practice, even though Thomas clearly likes this disparate collection of songs, ‘Marauder’ is a deeply uninteresting record. The fact that Thomas handles the featured material with ease could be applauded, but beyond a bit of vocal prowess, there’s little here to get excited about.  The album plods its way merrily across works by various different artists from four decades of rock and pop, seldom bringing anything new or magical to any of the chosen songs.

The album begins with one of the best offerings.  On a heartfelt, bluesy take on The Rolling Stones’ ‘Gimme Shelter’, Thomas moves between soulful cry and full on belting vocal with relative ease.  Set against classy acoustic guitar lines featuring moments of slide, Thomas’s vocal has a very professional quality, but then after several decades in the business, that’s to be expected.  Following that, though, this disc presents a journey into a world of mundane and occasionally embarrassing.  A pedestrian cover of Peter Gabriel’s ‘Sledgehammer’ has the charm of a Vegas cover band over-relying on funk bass, Snow Patrol’s slow-burning ‘Chasing Cars’ sounds like a cheese-fest when subjected to Thomas’s higher registers, and his take on Squeeze’s ‘Tempted’ (which could have been passable) is ruined by a string section provided by a keyboard.

There are more than a fair share of Beatles related cuts here, none of which set the world alight…  The once brilliant riff from George Harrison’s ‘Wah Wah’ is reproduced at a fraction of its original grandness, while the backing vocals from Harrison’s 1971 original are presented here in an inferior way, as Thomas’s bevy of backing singers warble in a barely passable style.  Harrison’s naturalistic lead vocal part, meanwhile, is subjected to a whole bunch of overdone vocal gymnastics and occasional rock shouting. Paul McCartney’s ‘Maybe I’m Amazed’  fares slightly better, partly because it was a much better song in the first place. Thomas hits McCartney’s louder notes in a spot on fashion, while simultaneously playing down the off-kilter piano notes from the original cut.  This is a reasonable stab at a fantastic tune, but even so, it could have been a lot better.  The brilliantly inventive ‘Across The Universe’ is re-imagined as a safe pop/rock ditty complete with smooth female backing on the “jai guru deva om” lines, resulting in something that sounds like it ought to be played in a shopping centre.  His take on The Beatles ‘Oh! Darling’ is horrible, at first sounding like he’s shouting through a megaphone, and later sounding like he’s just shouting and the psychedelic ‘Rain’ – as beloved by Noel and Liam Gallagher – is given little more than a cursory run-through, with little understanding of what made the original great.

Liam and Noel would hate it, but not as much as they’re likely to hate Mickey Thomas’s version of ‘Champagne Supernova’.  Granted, in the great vocalist stakes, Thomas has a greater range than Liam Gallagher could ever muster with his nasal whine, but without Liam, the song is robbed of its distinctive style. Thomas sounds like he’s relished the opportunity to include a cover of this song alongside a few more predictable choices, but even so, it’s empty and soulless.  Attempts at covering both Muse and AC/DC are woefully misjudged… The AC/DC riff from ‘Moneytaks’ now sounds like a bad pub band, which becomes oddly fitting since Thomas sounds like a bad pub singer once he’s pushed his voice to approximate a Brian Johnson style rasp.  Muse’s Matt Bellamy may have a voice that’s a nasty untrained wail that’s punctuated by his gasping for breath between each line, but it’s preferable to Thomas’s high pitch throughout a cover of ‘Supermassive Black Hole’.  This cover is the gold standard for a middle aged man trying to prove he can cut it with edgier material.  The drum line here isn’t quite as grating as Muse’s very stylised programmed drums, but that alone just isn’t enough to stop this being pretty worthless.

Thomas may be well regarded as a vocalist, but none of his performances here come anywhere close to capturing the magic of any of the original recordings.  He can’t even earn brownie points by claiming he’s made the songs his own, as most of the arrangements are faithful to those original cuts, though often inferior.    In addition to all of those misfires mentioned here, you can also hear Mickey Thomas bring nothing of any real interest to the works of Joe Cocker, Bob Seger, Russ Ballard and Tom Cochrane, though why you’d waste your time when you could dig out the originals instead is anybody’s guess.