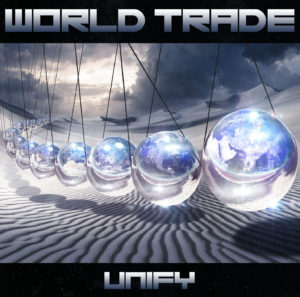 The good news is that ‘Unify’ is much more a World Trade record than ‘Euphoria’ ever had seemed, with Gowdy’s contributions seeming especially essential to the World Trade sound. To capitalise on this return of the original line up (completed by Mark T. Williams on drums), the album’s artwork reinstates the Newton’s Cradle from the debut’s now familiar sleeve. Even before hitting the play button, this seems like a genuine World Trade record in every sense. The slightly bad news is that the production isn’t quite as shiny as it could be: it’s got a presence, with Sherwood’s bass high in the mix, but there’s something that – naturally – makes it sound like a closer bedfellow to Sherwood’s own ‘Citizen’ than ‘World Trade’ (the album). Maybe it’s that it just isn’t 1989 after all…and recreating such a brilliant and unnatural shine three decades on just wouldn’t be the same.

With the history and technicalities out of the way, what of the most important thing here? Do the songs hold up? Thankfully, the answer is (mostly) yes…(no pun intended). ‘On Target On Time’, in particular, is classic, classic World Trade right to the point where it bears more than a passing resemblance to a couple of the older tunes. What you get here, though, is Sherwood in great form, both vocally and musically. His voice belies the passing of time, even disguised under the usual filters, but his bass work is stellar. Factor in a big hooky chorus and various pointed guitar parts from Gowdy and it becomes unmistakable. Following various ‘Leave It’ style vocals, ‘Gone All The Way’ is another instant highlight, capturing the band in a softer mood at first, with an imploring voice set against a clean and techy sounding guitar, before the slower tune explodes into a world of measured rhythms, heavy and pointed basses and a whole world of multi-layered harmonies. The harmonies are set up in a way that totally tips the hat to Buggles, while Allison fills lots of space with tinkling keys. All of that would already make this a must-hear World Trade track, but once Gowdy steps forward for a semi-bluesy, semi-proggy solo, highlights both a distinctive tone and natural flair, it really reaches the next level. Between these two tracks, there’s already every reason to check out this album.

Blending guitars and keys in a harmonic but simple riff, ‘Same Old Song’ at first sounds as if it’ll be World Trade by numbers, but soon shows itself to be much broader, ushering in a pumping bass against a slightly bluegrassy twang. These uncharacteristic verses show a new side to the band, while a heavier riff adds something extra to an album that often seems familiar, even from first listen. In fact, this five minute workout is wondrously complex, occasionally falling into Beatle-y psychedelia with Williams approaching his toms in a weighty manner, while Allison offers a widdly keyboard solo that’ll have the progheads getting over-excited. Linking it all, of course, is a melodious hook and some great bass work, so although it shows new ground being covered, there’s always that return to base that instantly appeals. Another case of experimentation, ‘The New Norm’ throws out a clangy guitar riff against a messy keyboard, before dropping into a verse that blends a few World Trade trademarks with a Toy Matinee sense of pop. By the time everything settles into a great pop/rock chorus there’s so much to like, but on first hearing, the verses seem a little cluttered. Perhaps placed later in the album’s running order it would sound less jarring, but since the band have chosen this to kick off the album…it might be make or break for new listeners. That said, if you’ve chosen to hit the play button on a World Trade album in 2017 at all, the chances of you being new to the band is unlikely to say the least.

For those looking for something spikier, ‘Pandora’s Box’ taps into a higher energy workout that sounds like Rush jamming on The Police’s ‘Synchronicity I’ – obviously sounding great for all concerned, especially the way Gowdy throws perfect soaring guitar lines against Sherwood’s busying bass – while ‘For The Fallen’ taps into a thoughtful “live for the moment and be mindful of others” lyric. What’s most impressive here is the way they’ve managed to hone in on melodies and musical elements that are entirely reminiscent of the younger World Trade circa ’89, but without it ever sounding like lazy recycling. In fact, with some tasteful bass work, a pseudo-prog keyboard and easy harmonies throughout, it joins ‘Gone All The Way’ as one of the album’s essential listens. Elsewhere, ‘Life Force’, ‘Again’ and ‘Where We’re Going’ are World Trade by numbers in many ways, though never seem any the worse for that. During the latter, especially, the mix of upfront bass and techy keys is a sharp reminder – should one be needed – of why the first World Trade album should be in every AOR and prog fan’s collections.

Once you make it past the slightly messy opening track and attune to Sherwood’s voice not being quite as high as it was in ’89, ‘Unify’ is hugely enjoyable. Sure, there’s a feeling that the production could be a little brighter in places, but again, those feelings will certainly be accentuated by over familiarity with the debut from way back…and let’s face it, if you have any interest in ‘Unify’ at all, that debut will be a cast-iron favourite and pretty hard to beat. Taken on it’s own merits, this album is a brilliant companion to ‘Citizen‘ and is instantly better than ‘Euphoria’. So, open your ears and allow time to weave its magic…and pretty soon, ‘Unify’ will reveal itself as being a more than worthy addition to the World Trade canon.