The reality could have been different. His debut long player, ‘My Aim Is True’, wasn’t designed as a Costello album. Its songs were working demos, created on the hoof by Elvis and members of Clover (yet to become Huey Lewis’s News) in various sessions, but completed in under twenty four hours. Conflicting sources claim the recordings cost £1,000 or even £2,000, but the reality is probably somewhere between. No matter how much the cost, it’s the energy of the performances that really comes through. Producer Nick Lowe planned for the recordings to be sent to singer, friend and retro enthusiast Dave Edmunds for possible consideration. Stiff Records got no interest from Edmunds and instead released the recordings as a finished album in July 1977.

It appears the record label weren’t even sure of Elvis’s own potential at first, with early copies of the album containing a slip of paper that allowed the record’s buyer to claim a free second copy for a friend. So, with an almost desperate attempt at a marketing ploy and a demo-quality recording, what is it about ‘My Aim Is True’ that’s kept us all listening for forty years…?

London based musician and actor Tommy Burgess suggests it’s due to great songs, but more than that, it has much to do with ‘My Aim Is True’ being unique within the Costello canon. “It’s not necessary what people would think of as a typical Costello album”, he says, “but then again, if you’re a real fan, you’ll know there’s no such thing as a typical Costello album. It sowed the seeds for the next three albums recorded with The Attractions between 1978-81, but it has a very different feel. It’s his first and most original sin, in my opinion. Much as we’ve been told Elvis’s arrival rode the punk wave, it’s just not true. It’s a pub rock album in many respects, but it’s better than that. It’s a very specific kind of Transatlantic pub rock, unique to that configuration of musicians. You’ve got this very British songwriter and Californian musicians; it’s a mismatch, but it kinda works. Just listen to the intros on a lot of the tracks – they’re the kind of intros that rarely pop up again throughout the rest of Elvis’s career.”

Kurt Baker, a musician whose career often draws parallels with the early Attractions work and other new wave of the late 70s agrees that the brilliance of the record has a lot to do with Clover, almost as much as Elvis’s lyrical bite. But as much as that, one of the things that’s really helped the record stay fresh over the past four decades is the feeling of spontaneity. “It’s an honest record, not overproduced or over played by the musicians backing Costello up…it’s just completely natural. You can’t fake that. Obviously it’s one of his crudest recordings production wise but it as doesn’t rely on synthesizers or over the top musicianship, It’s staying power comes in its simplistic approach.”

For Rich Barnard, a singer-songwriter from London and writer at Red Guitar Music, ‘My Aim Is True’ was somewhat of a late discovery, but even he recognised the record’s importance, years before knowingly hearing a note of it. “As I flicked through racks of vinyl as a young teenager, the album was always there, filed under punk and new wave, a section that was inexplicably but definitely not for me. Back then, I was a loyal and regular visitor solely to hard rock and metal…and pop, if no-one was looking. Even then I suspected I was missing out on some of this other music, forbidden to me by its very classification, but I was too scared to venture outside my comfort zone. I had long hair, cowboy boots and ripped jeans. It was already too late for me. The big question was, why was that album always in the front of the rack anyway? I swear I could feel Costello sneering at me from the cover.” 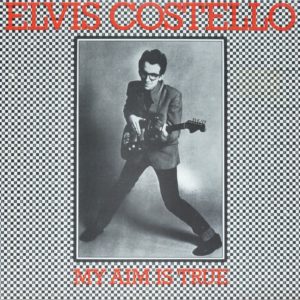 Sneering, of course. Despite being a pub rock album at it’s core and never quite the punk or new wave the record shops latterly insisted, the album had – and still very much has – an undercurrent of unease.

Tommy also suggests that ‘My Aim Is True’ stands out as a special recording thanks to its use of barbed rhetoric. While Costello would arguably go on to record songs and albums with harsher commentary and bigger bared teeth, the debut gets everything off to a fine start…

“With ‘Welcome To The Working Week’, he starts album with the line “Now that your picture’s in the paper being rhythmically admired”, which said all it needed to say to shock the listener, but in Costello’s own style, he shocks with a smart euphemism, rather than the jerky, adolescent humour of the (unquestionably brilliant) Damned. The album’s lyrical content then goes on to strike at something at the very fabric of the British public; the secret sickness found in the everyday lives of everyday people. Costello shines an interrogatory light onto suburban sex, the tabloid press and the mundane semi-detached existence of the people living out Abigail’s Party up and down the UK. He was trying to knock down the walls of his seemingly comfortable home life, as well as those of his neighbours. Exposing the “Sneaky Feelings” and “Mystery Dances” found in the smart little houses of people who were waiting for the end of the world became his stock in trade. In my opinion, this is what made Elvis’s albums so potent: he made normal people question whether or not they were truly happy. Admissions such as “I love you more than everything in the world, I don’t expect that will last” and those found in ‘I’m Not Angry’ were enough to create his nasty-little-man persona. His life up until then had been one of a young parent with a safe, polite wife and a mind numbing job – an existence much of the population were striving to achieve. Evidently, Declan McManus was not a radical punk outsider to be brushed aside. He was a whistle-blower on middle-England, having lived “a little too long on the outskirts of town” who is “going insane” as a result of living a quiet life. And it seems enough people enjoyed his honesty. It was enough along with his associations with Stiff Records – home to The Damned – for him to be given the punk label. Let’s not forget, though, that The Damned hadn’t had any real commercial success when Elvis appeared; the Sex Pistols hadn’t yet released ‘Never Mind The Bollocks’… The album charts the week ‘My Aim Is True’ was released were still dominated by elder statesmen such as Kris Kristofferson, The Beatles and Johnny Mathis, the bankable radio friendly acts on major labels – ABBA, The Eagles, 10cc – and, apparently, The Muppets and Acker Bilk. In terms of a new wave, Elvis was almost out there on his own.”

Rich continues: “It’s hard to believe ‘My Aim Is True’ is forty. Same age as me. While Elvis Costello’s career since 1977 contributes to a sense that I’ve achieved very little with my life so far, I’m also consoled by the fact that his music has nevertheless become an important part of it. Once I realised that while Elvis Costello was indeed quite adept at sneering, he probably wasn’t sneering directly at me, I fell in love with ‘Imperial Bedroom’ and ‘Armed Forces’ and haven’t really looked back since. ‘My Aim Is True’ is, of course, where it all began and listening to it now I don’t feel quite so bad about my own achievements. The album makes it clear that Costello was a freaky genius right from the start. It’s surely just not normal for someone to be that fully formed at their first outing. Sure, the trademark sound of The Attractions was yet to arrive but all of the songwriting oddities, cutting wit and raw energy were very much in place. In and out in under a minute and a half, the opener ‘Welcome To The Working Week’ should be played to anyone studying the art of songwriting to display the value of brevity. The pain of ‘Alison’ is perfectly served by the fragility of the recording…and as I grow into middle age alongside this album, I will aspire to the philosophy of the opening line of ‘Red Shoes’ – “I used to be disgusted, now I try to be amused” – though I suspect that it might actually go full circle as I become a grumpy old man…”
*

Following the early success of the album, Costello returned to the studio with a permanent backing band, The Attractions, and recorded a single, ‘Watching The Detectives’. More in keeping with the new wave sounds of the time, the track became a huge hit in the autumn of ’77. His place in the rock history books seemed to be more than secured. After taking on The Attractions as his full time backing band for the next few albums, Costello went from strength to strength. While the run of albums from 1978-80 is arguably stronger and certainly more focused, it’s still ‘My Aim Is True’ which best represents his breadth of talent as a songwriter, a man able to turn his hand to a variety of genres. Looking back, perhaps this debut is reason enough for us not to be so surprised at those albums that have sometimes raised eyebrows for being particularly un-Costello-like, if there is such a thing – from 1981’s country album ‘Almost Blue’, to the Transatlantic roots lurking throughout 1985’s ‘King of America’, the torch songs and balladry of ‘North’ in 2003 and the brilliant collaborations with Burt Bacharach and Allen Toussaint. Always approached with an open mind, Costello never seems as much a man out of place, as a man out of time. A songwriter of classic songs.

Elvis’s original plan for the songs which became ‘My Aim Is True’ eventually came to fruition too, with various bands and artists – from the punk scene and far beyond – putting their own stamp on a few of these early songs, so, when it comes to timeless material, maybe four decades doesn’t seem like such a long time after all.

For all of the deconstruction, analysis and discussion, what makes ‘My Aim Is True’ so enduring is it’s variety and – most importantly – quality of songs. In a final word, Kurt Baker puts things particularly succinctly: “All you gotta do is listen!”

With thanks to Tommy, Kurt and Rich for their insights.