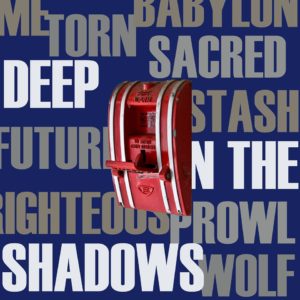 In the first half of 2017, Strange Majik released the ‘Soul Crisis‘ EP. It’s four songs melded the typical Strange Majik funk, rock and soul sounds with a less typical anger. Donald Trump had just become one of the most powerful men in the world with a mandate that would drag the US backwards at a frightening rate. No wonder Strange Majik’s head honcho David Pattillo was in a foul mood. Several months down the line, very little has changed with the state of the world. Trump has increasingly made America a laughing stock, but people aren’t taking it lying down…or letting it stifle their voices or creativity.

Armed with four more retro belters, Pattillo seems less angry on ‘Deep In The Shadows’, but that’s not to say the songs don’t have important messages to convey. There’s a lot to be gained from ‘The Promise’s suggestion that “we live right in this moment…and not let it get away”, especially with mention of a “longing for an old life” thrown into the bargain. Yup, the world’s pretty shitty but we’ve all got each other. It’s an old sentiment, but even released into the wild with a similarly old style musical arrangement – one which borders on Kris Kristofferson’s ‘Help Me Make It Through The Night’ on occasion – there’s much to enjoy here, whether that’s Pattillo’s weathered and weary vocal or Leonard Le Cloarec’s tasteful sax work. It is perhaps the closest to mellow grooves Strange Majik has ventured thus far, but between the thoughtful arrangement and familiar feel, it’s a pleasure to hear the band branching out. On the flip side, ‘The Wolf’ sets up a defiant and retro mood via a tough and funky guitar riff, against which Pattillo places his voice in a very dominant role. “You won’t believe the shit I’ve seen”, he howls, suggesting he’s still (rightly) at unease with the world, but the music is so fluidly funk oriented, it’s just enough for you to let go of your cares and get down into the groove…at least for a while. …And if you somehow feel you’ve heard all this before from the musicians in question, check out how layered the second half of this track is: the flute work is just lovely, reminiscent of Prince collaborator Eric Leeds and a perfect fit for the Strange Majik universe.

In a sombre mood, the title cut allows all concerned to expose a little soul on an evenly paced arrangement. It’s spacious enough to allow reverbed guitar sounds to weave in and out of a great bassline, but it’s the vocal that stands out. Pattillo’s lead and some softer female harmonies – courtesy of Cole Razzano – ooze charm in a fashion appropriated from the mid 70s, then run through Lenny Kravitz’s paisley kaleidoscope and dropped somewhere in the New York suburbs. Great harmonies and an even greater lead guitar both go a long way to making this track sound both deep and tasteful…and if you’ve been a long-term passenger on the Majik bus, a few plays will ensure this becomes a favourite. The best of the bunch this time around, though, is by far and away ‘Pretty Little Pony’. A definite throwback to the excellent ‘Raised On Rock ‘N’ Roll‘ LP from 2016, this is the Strange Majik funk machine in full effect. Pattillo is in particularly strong voice, raising from hushed soul sounds to belting retro rock throughout, while the old-school backing vocals (courtesy of Cherrye J. Davis and Briana Layon) really give this track the feeling of an old Sly & The Family Stone jam. In fact, in delivering huge and funky rock sounds, the entire band is on fire, with Ben Jamal Hoffman’s clavichord meeting the guitars in a superb face off, while the rhythm section of Chris “Baby GSauce” Gaskell and Colin Taylor (bass and drums, respectively) are locked together throughout. It’s certainly nothing new from Strange Majik, but that also doesn’t stop it being one of the highlights of 2017.

‘Deep In The Shadows’ (the EP) seems less concerned with pointed messages and politics and, as such, reinstates much more a natural state for Pattillo which, of course, isn’t a bad thing. America is still on the verge of meltdown at the time of this recording, but Majik attempts to bring musical salvation and good times to ease the pain…and it’s a job well done. There might be better material to be found on ‘Raised…’, or perhaps something more immediate in the Pattillo canon elsewhere, but both ‘Pony’ and ‘The Wolf’ are strong enough alone to recommend this short musical soiree.