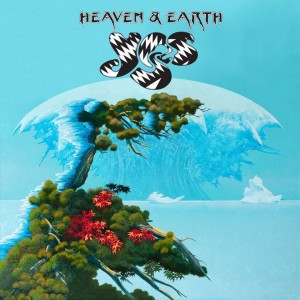 With Yes being  more of a flowing collective than a band with a traditionally rigid form, we never really know what’s around the corner and sadly, the ‘Fly From Here’ line-up of Squire, Howe, David, Geoff Downes and Alan White – was among the most short lived of all Yes line-ups.  With Benoit David moving on and producer Trevor Horn stepping aside for Roy Thomas Baker, we wouldn’t get to witness how that group would fare on a follow up crafted (presumably) created from all brand-new soundscapes.

Returning to the studio with Glass Hammer’s Jon Davison taking up the role of lead vocalist – an unenviable position given the attitude of some “fans” – the results on ‘Heaven & Earth’ could not be more different than most people expected.  The shift in the band’s sound between ‘Fly From Here’ and ‘Heaven’ is more pronounced than the differences between any other sequential Yes releases before, save for perhaps the sideways step between 1974’s grandiose and stupidly ambitious ‘Relayer’ and the more song-oriented (and quite brilliant) ‘Going For The One’ in 1977.  While not having anything much in common musically with either of those records – aside from being a Yes album – stylistically, that shift away from progressive complexities and towards simpler song-based material is echoed here.

Firstly, its quickly evident that Davison’s voice is a good fit with Yes’ umpteenth re-birth, his high tenor and falsetto tones resting somewhere between Anderson and David.  Replacing a vocalist is a tricky business – especially one as loved as Jon Anderson seems to be – but the band know Davison is up to the job and never try and push him aside by concentrating on overtly complex musical passages:  indeed, quite the opposite, in fact.  On most of the album’s opener, ‘Believe Again’ – a number written by Davison & Squire – its the vocal harmonies and melodies that leave the biggest impression, the musical side of Yes appearing somewhat sedate. Their softer mood is evident right from the off, with Howe’s echoing tones sounding more like a violin than electric guitar.  A simple melody – light years away from the atonal and busy bonkersness that he is capable – leads the rest of the band into a surprisingly lengthy tune given the general musical approach.   Fleshing out most of the harmonious musical side, Downes’s keys take on pompy chords, perhaps closer to Asia than most Yes from yesteryear, while Alan White is left to settle into a fairly basic backbeat.  While there’s a hint of proggy indulgence during the middle instrumental break courtesy of some deep booming bass colliding with a typical Howe jazz-inflected solo, and Squire can also be heard teasing with some fairly typical bass flourishes during the coda , the bulk of this seven minute opener is sedate and very accessible.  Making the most of a harmonious chorus throughout, ‘Believe Again’ shows off a very mature, streamlined sound – and it is one that gives most of the album its overriding mood.

‘The Game’ brings much more of the same.  Across seven minutes, Davison cements his place within the Yes pantheon, his higher registers taking the reins.  While there’s still a very AOR edge to the music, hints of earlier Yes creep in farther, with Howe asserting himself a touch more. Here, simple vibrato filled notes inform most of his lead work, while acoustic flourishes provide most of the verses’ musical backdrop.  No matter how many lead guitar noodles appear though, none of the lines come as particularly surprising – its the kind of thing you’ve heard from Steve time and again throughout the decades – but, of course, he has nothing to prove.  His jazzy tones provide the perfect foil for Squire’s tough bass sound throughout but, even so, both players sound more than content to let Davison be the one who really shines.

Stepping out of the shadows, Downes leads ‘Step Beyond’s verses with a “marmite” keyboard sound that rattles away happily, its riff sounding like an old TV theme tune – equal parts sci-fi and seventies children’s TV.  Far more flippant than either of the previous numbers, this appears rather throwaway at first, but subsequent listens uncover enjoyable features.  Yet again, the band favours strong vocal arrangements, while Howe includes a few unexpected moments of heaviness within his riffing.  One particularly brief riff echoes the aggressive nature of ‘Machine Messiah’, while a couple of rhythm guitar motifs seem to have more in common than Trevor Rabin than anything he’s laid down previously.  The happy-go-lucky nature of this piece will either amuse or annoy, but the fusion of styles within make the best of Yes’ more streamlined musical skills – they seem content to settle for something that never requires any flashiness, but it works.   The largely acoustic based ‘To Ascend’ is the album’s only genuine dud.  The coming together of piano and acoustic guitar is pleasing at first – especially when glued together by Squire’s distinctive bass, but beyond that, it’s just drippy.  Davison recycles a bunch of hippie-based Jon Anderson rubbish about seeing through the eyes of children and birds flying, while the band seem to get lost within a MOR swamp.  It’s not as ridiculous as Jon Anderson’s ‘Circus of Heaven’ (from 1978’s ‘Tormato’), but this album could have done without it.

‘In a World of Our Own’ is unlike anything to appear on a Yes album before.  Although carrying on the gentle approach of the preceding material, its marching beat – settling somewhere between ‘Penny Lane’ by The Beatles and many a 70s pop tune – is surprising.  Although he never gets to play anything particularly striking, Squire’s fat bass sound remains distinctive wherever it rises, while Howe’s main contributions straddle prog rock and noodling jazzy pop whenever he’s called upon for a lead break.  There are occasional threats to branch out into something more grandiose, usually whenever Downes throws in a huge Hammond organ chord, or the time signature fluctuates – as it does occasionally, this is still Yes after all – but ultimately adult pop wins out here…and in terms of such middle of the road pop, this is very pleasant indeed.   A composition solely credited to new man Davison (presumably bought to the sessions in near complete form), ‘Light of the Ages’ at first appears to be another drip-fest akin to ‘To Ascend’, but luckily we’re spared another straight trip into sub-Anderson new-agism.  Yes, the acoustic guitars are back; yes, he sings about the cosmos, and yes, there’s that title, but the musical elements make up for any slightness.   Although too brief, Geoff Downes puts in a bigger appearance here than on most tracks courtesy of a quasi-classical piano moment; Howe’s high pitched soaring guitar motifs come closer than ever to bringing back memories of classic 70s Yes and Squire’s pumping bass – although preferring solidity and simplicity over showiness – brings a fantastically meaty sound.    Although not always as enjoyable, in places, ‘It Was All We Know’ flirts with pop almost as much as ‘In a World of Our Own’.  Another tight, mid-paced rhythm leads the way, while the harmony vocals possess a quality that’s closer to light musical theatre than the more typical Yes, but Howe’s lead guitar work ensures its always quickly evident this is a Yes recording.  This is filler in almost every sense of the word; while never that bad, there’s nothing to latch onto –  the lead guitar work is far better on ‘The Game’ and ‘Step Beyond’, the vocal harmonies far tighter and stronger on ‘Believe Again’ – even Squire appears to be happy just kicking back.

The closing number ‘Subway Walls’ sounds like a clanking homage to older Yes pieces, driven by a complex time signature with the bass pushed right up in the mix.  The vocal lines are as disjointed as the bulk of the music, the multi-tracked harmonies having an eighties edge (and occasionally sound like World Trade – a fact that’s unsurprising since they were engineered by Billy Sherwood).   For most of its duration it sounds like a battle between the guys in the rhythm section – a huge release for Alan White – with the rest of the band chiming in here and there.  Howe’s solo, too, echoes former glories – angular, striking, not always melodious – but it never feels entirely right on the whole. Okay, from a prog rock angle, this track is more interesting than most of ‘Heaven & Earth’ (Squire’s spiky playing especially), but it sounds like the skeleton of something.  Geoff’s keyboard intro sounds bolted on; there’s little warmth throughout and no obvious hook to latch onto either musically or vocally.  After lots of well-rounded pieces, there are sparks of greatness, but ‘Subway Walls’ has none of the good- heartearted feeling conveyed by the rest of the LP.  If anything, it sounds like Chris Squire offering those less open-minded fans an olive branch…

Those who constantly look for ‘Relayer’ and ‘Close To The Edge’ style indulgence when approaching a Yes album will hate most of ‘Heaven & Earth’ with a passion, but then, it was probably never really meant for those guys anyway. Love it or hate it, although there’s an all-round feeling of safety with ‘Heaven & Earth’, it doesn’t seem to retread too much (obvious) previously covered ground.  Like ‘Open Your Eyes’, it’s very much Yes-lite, not seeking to push any real boundaries or challenge its audience.  Calling out far more to any open-minded ears and the AOR/pomp fan as opposed to those who demand prog rock with a capital P, it’s an album that is enjoyable enough on its own merits.