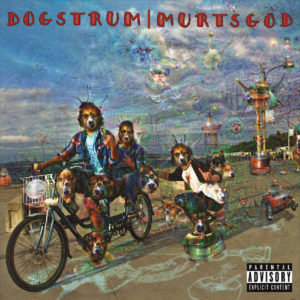 Dogstrum? Dog? Strum? It’s true – all the great band names are spoken for. You’d have to wonder how many other supposedly worse names this Seattle band discounted before deciding that Dogstrum would be their best. Luckily, though, for this particular power trio, their music shows more than a glimmer of greatness. Labelled ‘grump-punk’ (whatever that might mean) by a local paper, their sound is hard and dirty, energetic and sometimes raw in spirit, though fidelity-wise, these six tracks are well recorded with plenty of punch in all the right places.

Someone in the band really understands the importance of sequencing too, as the band kick off this debut with a massive, swaggering, attitudinal blast. ‘Ticket Master’, an expletive driven, slightly grungy piece of garage rock that comes fully loaded with a thick guitar riff. Boasting even bigger bass sound, the four strings bend in a similar manner to Mark Sandman’s slide bass, which sounds terrific when applied to a tune that shows some of Tad’s all round heavy duty garage rock bluster. A lead guitar solo careens off course a couple of times but the slightly sloppy approach doesn’t hurt the intense groove that carries this track. And all the while, Jake Flatt belts out a vocal that’s perfectly suited, in a style that fuses garage rock energies with Joe Leste’s hard rock edge. It’s probably the kind of vocal Eddie from American Killers thinks he possesses. Looking at the big picture, this has a little of everything, a lot of power and is really, really cool.

‘Eldorado’ is a bit more ordinary. It has plenty of drive in the riff department, but unfortunately loses that amazing bass. In a straighter garage set up, Dogstrum give it their all regardless, and the resultant tune – sort of like a Mudhoney and Supersuckers hybrid – swaggers well enough. The lower register of the vocal allows the riff to take centre stage and a simplistic chorus actually proves quite catchy. ‘Crawl’, meanwhile, could be a different band. Its verses straddle alternative rock with almost a poppy, glam edge – like a leftover from the very commercial Stone Temple Pilots comeback disc – before dropping into some heavier post grunge for the chorus. The band are adept at both styles, striking the best point between heaviness and commercialness, but it doesn’t stop there: for an instrumental break, they fuse the Pilots-y groove with a loud ringing guitar that has more in common with the UK indie scene from 1990. How they managed to mix this all together without sounding like they’ve tried too hard, well, that’s anyone’s guess.

‘In The Midnight’ returns to the overtly trashy riffs with a vocal to match. Simplistic lyrics find a home atop a loud buzzing guitar riff, underpinned by solid bass work. Heavy on the Supersuckers influence, it’s repetitive and disposable. It’s easily the EP’s skipper, but even then, the band’s general enthusiasm and a certain degree of tightness ensure it’s not anywhere near as bad as it could be. The thoughtful ‘Daddy’ taps into a world of ringing guitars which coupled with a gravelly voice could be a Goo Goo Dolls demo. You can hear the love between the cracks as Dogstrum recycle moments from the more melodic parts of 90s alt-rock and a live sounding guitar solo really adds to the moodiness. Again, it’s sometimes hard to imagine this came from the same three minds as ‘Ticket Master’, but there’s still a lot to like. Finishing up a short but enjoyable listen, ‘Saturday Night’ delivers on early trashy promises with a song about youth and wasted weekends, with a big riff that’s at the good end of sloppy and moments that evoke Watts with occasional breakdowns that somehow – possibly unintentionally – aren’t a world away from Joe Leste’s Beautiful Creatures (at their more 70s rock end, naturally). Trevor Flatt keeps a steady rhythm throughout, allowing Jake to play out with melodic tones and this is the sound of a band who aren’t ashamed to wear the past on their sleeves, but still manage to turn out something that’s a cut above mere musical retreads.

Overall, the songs are often big and trashy and, for Dogstrum, the combination of talent and sheer ballsiness works well for all concerned. While the bulk of the songs mighn’t quite have that wow factor that’s so quickly delivered by the opener, these six tracks show off a band that have worked hard on their sound before deciding to share the spoils with the listening world (NFU, please take note). Do yourselves a favour and check these guys out as soon as you can. Look beyond the terrible name: this EP rocks hard – it’s certainly one of 2016’s more pleasant surprises.