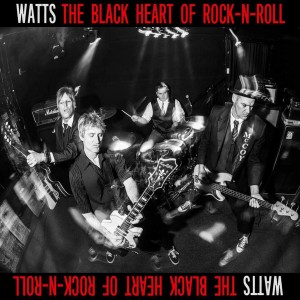 Never shy of their love for The Stones and various garage rock bands, Boston’s Watts get better with age. Their second album ‘On The Dial’ was home to a few great tracks and some filler; it’s successor ‘Flash of White Light’ had far more sparkle and set the band on a higher pedestal, suggesting that their fourth release could be a classic. Here it is…and this time, the band draws from an even broader selection of influences. In their own words, ‘The Black Heart of Rock ‘n’ Roll’ finds them “diving deep into their record collections for inspiration”. The result can often lead to a game of “spot the influence” for those fans who’ve surely treasured similar collections themselves, but there’s little doubt that ‘The Black Heart of Rock ‘n’ Roll’ really gets the blood pumping and is a largely fun listen.

An instant classic and a number that really shows off those Watts Boston roots, ‘Stage Fright’ comes across like a souped up version of a seventies Aerosmith tune, with beats cranked out with the energy that drove those superb, early J. Geils Band records, all topped off with a Cheap Trick-esque vocal. A grubby guitar tone leads the way, but in terms of old-school rock, it’s the snotty vocal and a thumping drum part that lead to the all-important adrenaline pumping, while a raucous guitar solo tips the hat to both Joe Perry and Izzy Stradlin. Chuck in a couple of big key changes and a simple hook and this becomes everything Watts have strived for throughout their career to date. Likewise, ‘Strut (Like a Champ’ borrows lock stock from early AC/DC, resulting in a rollocking tune that’s equal parts ‘Whole Lotta Rosie’ and ‘Riff Raff’, with a terrific riff that invites much jumping up and down and possibly even the trademark duck walk. Songwise, it’s easy fare designed for shouting along, but musically, everyone’s on fire. By the time you get to the guitar solo, it’s almost impossible not to love such a well-played homage and when guitarist John Blout drops in a very cheeky lift from ‘Let There Be Rock’, you know the band are having as much of a great time as you are.

The title cut crashes in with an AC/DC-ish intro, allowing bassist Tim McCoy a chance to rattle his four stringer before settling down to some trashy rock that hovers somewhere between Rhino Bucket and Watts’ previous work at it’s most sleazy. The gravel-edged voice is a perfect fit for the huge retro groove, a bar-room guitar solo pushes the tension and another easy hook sends everything off with ease, while the Stones fuelled ‘Sunset’ could easily be a leftover from Watts’ ‘On The Dial‘ with its collective gang vocals and chunky rhythmic swagger. Elsewhere, ‘She’s Electric’ stomps and smashes like a loose homage to ‘Electric’ era Cult meeting The JuJu Hounds, providing a number that provides more of a direct link with parts of the brilliant ‘Flash of White Light‘ – a track that doesn’t test the band’s talents too hard – before ‘Bye & Bye’ taps into some old power pop, but dresses it in a cheap suit – presumably worn and stained by Keith Richards – and takes an even bigger step back towards earlier Watts recordings. The guitar tones are great, particularly the quasi-sloppy, Gilby Clarke inspired solo – and the general bar-room mood is always welcome. Looking deeper, it feels a little long, due to not changing too much from it’s original intent, and the vocal is a big let down. Whereas the gravelly approach works on many of Watts’ faster outpourings, the ravaged vocal chords present throughout this track are somewhat troublesome…or, indeed, even troubled.

Chosen as the single, ‘Up All Night’ has more cocky swagger per square inch than anything on the Kiss debut, making great use of the bass and a very live sounding drum. The vocal is lax, smoke filled and cracked like an old 70s rocker, while the use of muted guitar riffs adds a little extra edginess. The one line chorus is perhaps a weak link, but old school twin leads showing a greater love of Thin Lizzy and Cheap Trick are firmly on hand to pep the tune whenever required. The final pairing of ‘B Side’ – an ultimate ode to many vinyls past – and ‘Bring On The Lights’ ensure the album doesn’t end in an anti-climactic fashion. ‘B Side’ might stick to tried and tested musical ideas for Watts, coming across as it does like an alliance between Izzy Stradlin’s JuJu Hounds and early Buckcherry, but it’s lyric – a love letter to the excitement of putting the needle on the record – is almost guaranteed to bring a wash of nostalgia for your old teenage bedrooms. At the point the track peaks with some rousing backing vocals and the pay-off line “c’mon c’mon c’mon, spin the record!”, it’s clear this is essential listening. ‘Bring On The Lights’, meanwhile, is far more concerned with a rousing hook, leading to a track that hits hard with live performance in mind. It mightn’t add much new, musically speaking, but it looks to the past with a glint in its eye…and is that a cowbell? There’s the cure for your fever, right there…

Like all Watts recordings, ‘Black Heart’ isn’t perfect, but this band knows as well as any that great rock ‘n’ roll comes with warts, faults and a few wrinkles. If that loose and natural approach appeals to you, then this collection of tunes should more than hit the mark. While they’ve certainly not been shy of wearing the influences they found prominently upon their collective sleeve, the coming together of their talents unleashes what might just be the finest Watts collection yet.